When the new Sony HVR-V1 was announced, I was very eager to try it out as it would be the first 1080 handycam form factor camera capable of 24/30P. Amphibico’s Joe Bendahan told me that they were designing a housing for that camera (and the non-progressive scan sibling, HD-FX7) and offered an exclusive first look for me. So after a lot of difficult logistics including delivery attempts in Thailand and Singapore, I finally got my hands on Prototype #01 (thanks to fellow moderator Shawn Heinrichs and Amphibico’s Joe Bendahan) for my annual Sardine Run campaign. Admittedly this trip wasn’t the best place to do a housing review. One doesn’t get into the water often and the dive depth is mostly above 30ft. It does allow me to test for some of the issues reported on the Phenom.  Most importantly, please note I tested the prototype so some of the issues I mention may have been dealt with or non-existent in the production models.

The report has been split into the following sections: 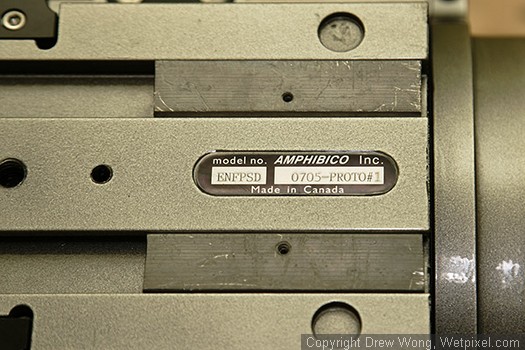 The bottom of the Endeavor with the screw-on lead weights. Those holes are where the rubber feet are suppose to be. They fell off from day 1

The Housing Overview and Setting up

I received the Endeavor with the 94° OPWA lens and the HD monitor back (Package: VHLENAHD) which is the top of the line of their various packages. The first thing I noticed when I unpacked the housing was the compactness of it. The camera fits into the housing with little room to spare on all sides. It weighs just about 12kg as tested, the camera fitted with a F970 battery, making slightly heavier to the old VH2000 housing (which incidentally is the camera the V1 is the HDV equivalent of size-wise) but definitely noticeably lighter and smaller than the Phenom. 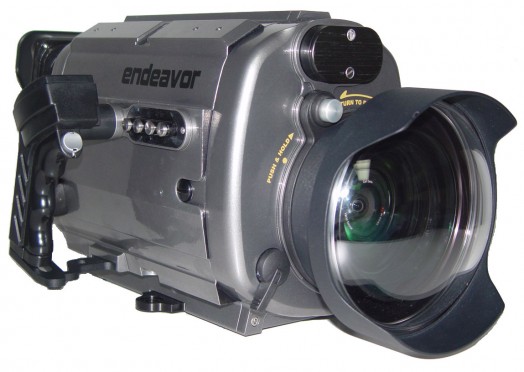 The Endeavor with the 94° OPWA lens (photo courtesy of Amphibico)

There are 2 lens choices with the housing, the 94° OPWA (as tested) and the standard dome port (tested for resolution and FOV).  Each port has double o-rings and are designed with Amphibico’s bayonet mount from the Phenom. Changing ports is pretty easy. You have to press the release button while turning the port to remove it. They do require a bit of force to turn as well so care has to be taken with the port surface. The standard dome port comes in a neoprene zipper “hand” bag. There is no such bag to store the bigger 94° OPWA should you switch to the standard dome port.

The top handle is metal and has to be hex screwed in. It has to be removed to fit in a Pelican 1650 case as it’s too tall otherwise. The handle can be removed without opening the rear bulkhead door. 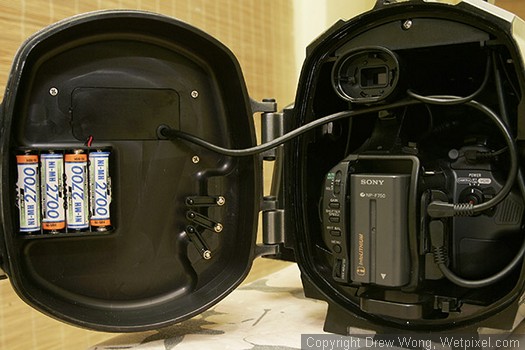 Rear view of housing with camera loaded and cables connected
(note: The AV connector cable(lower connector) need not be plugged in, I did it out of neatness)
If you have a top-mounted monitor as well, be aware only ONE monitor can be used at any time

The rear bulk head door has double o-rings and opens like a door on 2 hinges.  There are 2 latches on the right side of the and to open the housing, you must press the button on the latch to release the lock before turn it anti-clockwise to open. The camera tray is a simple screw on affair with a simple gear and button actuator for iris control. The tray is fastened to the housing floor by a single click latch and slides out easily. 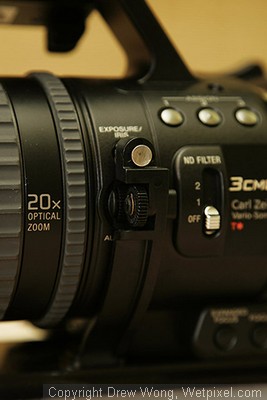 The cabling system is also simple with cable for LANC, XLR (or mic), A/V (composite). Most of the wiring is on the right side of the housing. A second mic cable comes out from the left which I assume is for the FX7. The rear HD monitor uses the Component output and has its own cable from the rear bulkhead.

Getting the camera into the housing is easy. The HVR-V1 requires the removal of the viewfinder magnifier extension and the mic handle (removal of 2 screws). You have to set the audio on camera then connect the XLR cable to the XLR inputs before you slide the camera in. You cannot do it once the camera is in the housing. The audio settings for the camera need to be on REC CH1/CH2 for stereo sound.  Turn on the Display Info and ensure the Markers setting on the camera is turn OFF as you will not have info display. Everything else can be done with the camera in the housing. 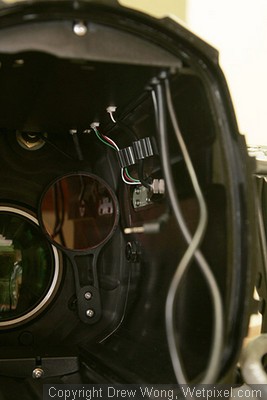 Inside the Endeavor housing

All of the electronics are contained in the top part of the housing, which reduces the chance of a total housing failure should there be a small flood. Just add 3 slim pad sanitary pads to the inside sides and bottom of the housings and it’s good to go. There is a flood alarm that warns you with the lights in the grips.

Once in the housing, the camera functions can be set up with the controls on the housing. The new housing has the typical Amphibico hardware, with the 5 button control handles on both sides. The right handle controls the power on/REC (trigger button), mode, zoom controls, and one touch white balance. The left handle has the shift (trigger button), momentary Auto-Focus, AF mode toggle, focus +/- control. With the left trigger (Shift button), the buttons have different functions. Using the shift button while pressing other buttons allow secondary functions for the buttons. You can also use the new HD monitor as a playback tool since you can switch to VCR mode as well.  You have play, stop, FF and REW on the left grip in VCR mode. 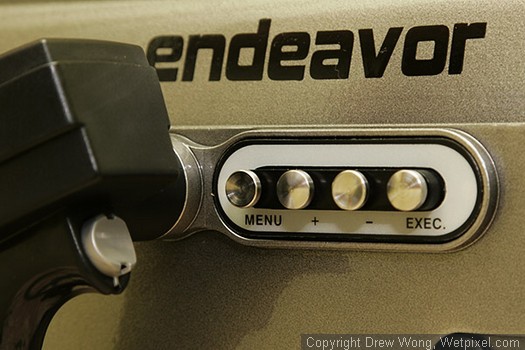 The menu control panel with the right trigger button which turns on the housing.

The menu control panel on the right side of the housing. The control panel’s middle 2 buttons control all menu function scroll, using it as +/- buttons to choose which function/ adjust settings when the camera is in the housing. This includes SHUTTER,GAIN and WHITE BALANCE settings.

On the left side of the housing are the Picture Profile, Expanded Focus and Iris controls (button to actuate and dial to control). Picture Profiles can be modified in the Picture Profile menu. The V1 allows 2 custom profiles. Expanded Focus enlarges the image up to 2X (depending if you’re shooting SD or HD) and is a nice tool to check focus. The rear bulkhead has GAIN, SHUTTER and WHITE BALANCE controls. To operate, you have to be in manual mode on the camera and just hit the button of choice.

The rear mounted LCD has 4 buttons, working like the menu control panels. You can see the Y’rBc or RGB signal display on the menu. It also has a zoom feature. There is a 4:3 marker option but it did not work on my unit.

Powering on is a simple pull of the right trigger button and to prevent accidental power off, one has to pull the left grip trigger (Shift) and push the lower left button on the right grip to power off. With all the various controls, the housing will require some work to master efficiently if you are new to Amphibico.  It’s relatively intuitive and not difficult, but still requires some practice to familiarize oneself with all the functions. For instance, there are 2 speeds for zooming, using the left grip trigger (Shift) to zoom faster (where you can go from Z00-99 in about 3 seconds) or slower (Z00-99 in about 30 seconds).  It’s pretty simple and getting the feel does come with practice.

The manual focus adjustment is similar but on the left group. Just select manual focus mode and use the top 2 buttons to adjust focus. Note the speed of adjustment of focal distance is inversely proportionate to the lens focal length setting and focal distance from the camera. For example, at Z00 and under 2m from the camera, the increments start slowly and increase rapidly to infinity. At Z99, the increments for focus is slower below 10m then it zooms to infinity. 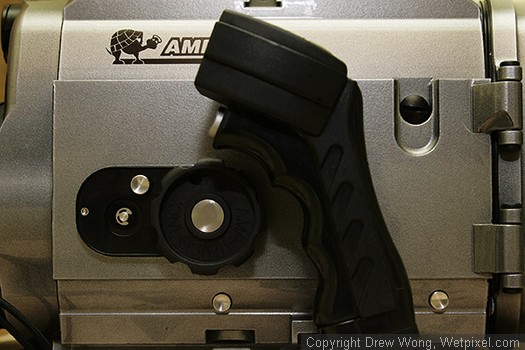 The left side of the Endeavor with Iris push button and dial, Picture profile on the bottom right and Expanded Focus on the left.

There is no Neutral Density Filter control access. The V1 has 2 ND levels, ND1 is a 1/4 and ND2 is 1/16. Like all digital video cameras start to exhibit lens diffraction from f8. Compounding that is the compression artifacts of HDV. Without ND filter control, it’s difficult to shoot 24/30P while remaining under f8 without using very high shutter speeds, which can cause a strobic effect. The ND control is also for controlling exposure, allowing better control of depth of field with small f-stops in brighter conditions.

For specific details from Amphibico on Endeavor operation, the manual is available (warning: 1.6mb PDF).

Continue on to the next page for the “Camera Settings”...