With this compact housing, I found it to be a delight to work with. I usually roll in with the housing and the lighter weight allowed me to do so without problems. Once in the water, I immediately felt the even balance and neutrality. It’s just a touch negative and has a slight tilt to the left due to the placement of the lens port and camera. Otherwise it bore the renowned Amphibico balanced handling, which made it very easy to shoot, even with one hand. At the bottom of the unit, you can adjust the weight and balance of the housing with screw-in lead weights. With the prototype, I had all 4 weights in and never adjusted them. 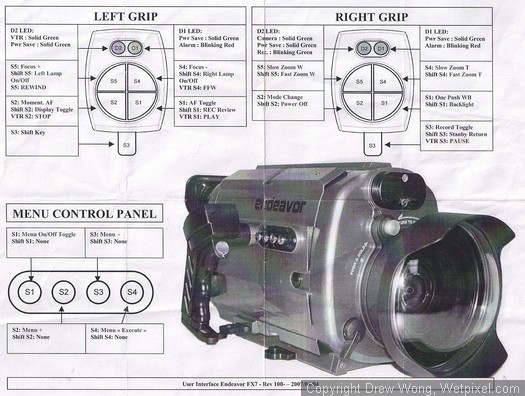 The Endeavor’s User Interface sheet
(It looks more complicated than it really is. Just practice before a big shoot!)

As for operating the housing, as I said before, it does take some practice to familiarize oneself with the various controls (doubly so since my prototype housing didn’t have ANY labels). This is especially so for using the shift button to get the other functions like faster zoom, powering off etc. It must be said it isn’t overly daunting at all and I remembered all crucial functions after the 2nd dive and all after the 3rd.

Almost the controls were within reach without having to release the handles, even the rear bulk head controls requires the left hand to almost leave the left handle to actuate. This aids the ability to shoot steady clips. Only the flip filter required totally releasing the right grip to operate, which is fine since you wouldn’t need to shoot the filter flipping down anyhow. The control buttons on the sides of the housing were within touch of the grips, but Picture Profile, Expanded Focus and Menu Control Panel do need a bit of stretching or feeling around the grip to reach for my medium-large hands. I found feeling for the correct buttons to change settings (the middle 2 of the menu control panel) without releasing the right grip is somewhat difficult, especially if you have short fingers. 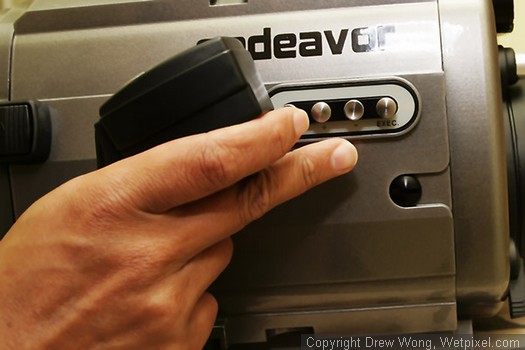 An example is how I was shooting a certain baitball. I had AE at -1 and I wanted to control the shutter speed, so I could keep it higher for slo-mo sequences later. Using auto shutter, the camera would drop to 1/30 when it could and I didn’t want that. Of course, baitballs are highly dynamic and trying to switch shutter speeds, I constantly had to feel all 4 buttons on the panel then feel back 2 or 3 buttons to find the right one. For reef scenes and less hectic, this would be a non-issue. And certainly, if I dived with the housing daily, the controls would become easier over time.

It was about then I also bemoaned the lack of ND filter control. I had set the camera for 1/120 and f5.6 and had to shoot a bright scene suddenly, a simple flick on the ND filter would allow me to shoot without problems. Without it, I had raise the shutter speed to 1/1000 even. In shooting in 24/30P mode, a very high shutter speed can cause an annoying strobic effect, so the ND filter is rather crucial for maximum image control in recording in Pscan. That, however, is an infrequent occasion and the housing fared well without the ND filters often times.

One function I didn’t try was the Smooth Slow Recording mode, where the camera are shoot at 120 fields per second at a super compressed, reduced resolution in short bursts for slow motion capture. I was very much into trying to capture in high shutter speed for slow motion clips but the reduced resolution outweighed the 120fps. So I never attempted it. In afterthought, I should’ve tried it underwater for a complete review.

One issue reported on Wetpixel by Phenom users was that the 94° port was prone to scratching. Apparently the coating on acrylic lens rubs off easily which leaves lines that show up on camera. The Endeavor uses the same port so I was cautious in how I handled it. With constant bashing from the surf launches and entries, the port stayed scratch free. It was covered with a neoprene cover and placed in a cushioned box. Even with the HD monitor, there were small bubbles I couldn’t see and the usual safe pressure wave of the hand at the beginning of a dive didn’t remove them. Normally, after entering the water, I’d wipe the lens off lightly with my gloved hand (I did use my neoprene gloved hand for a brush once or twice with no detrimental effect). I didn’t dare to wipe bubbles away as often as I would with my coated glass dome lens. I only wiped it down with a clean chamois after rinsing topside. Unfortunately, unless Amphibico gives me a lens to “test” the limits of abuse it can take, I regrettably didn’t test for the issue, lest I get charged for damaging the test lens. In retrospect, I was overly cautious about this issue due to the fact the housing wasn’t mine. Amphibico does recommend a gentle wipe with the hand upon entry in their manual.

Still, the 94° lens is a nice lens optically, with no significant drop in resolution compared to the camera and it was vignette free. Resolution did drop slightly more with the plastic flip filter on. It handled small macro subjects without problems too. There was also a bit (but negligible) of barrel distortion. The 94° dome port acts like a 0.7x WA converter in coverage, wide but not very. The FOV isn’t as wide as on the Phenom since the V1U is 35.9mm (35mm equivalent) at its widest whereas the Z1U is 32.5mm(and the 94° lens was designed and built for the Z1 and Phenom housing). The V1U has the narrowest focal length lens of the HDV handycam 3x sensor so all adapters/converters will suffer accordingly. The standard dome port merely reduces the water magnification effect.

Using the sun to WB at various depths, I can say the Endeavor’s Electronic White Balance works well. However the range of the V1U’s WB isn’t good past 22m(75ft), even with the flip filter on. Which comes to one of the more debated issues of the HVR-V1/FX7, the “lowlight” performance. I did bring it down to 30m (100ft) and left the flip filter on. I limited gain at 6db (anything more becomes objectionable in terms of resolution and noise to my eyes but if it means missing the shot, 36db hypergain works too!). The results were acceptable and workable. This is of course dependent on the visibility and turbidity of the water. On this particular dive, I had 25m visibility and clear water. At 19m on another dive with 10m viz and more particles in the water, it actually looked comparable. HDV already requires more light than DV. If you shoot mostly in turbid and dark conditions, the V1 may not be for you. Then again, HDV may not for you too. 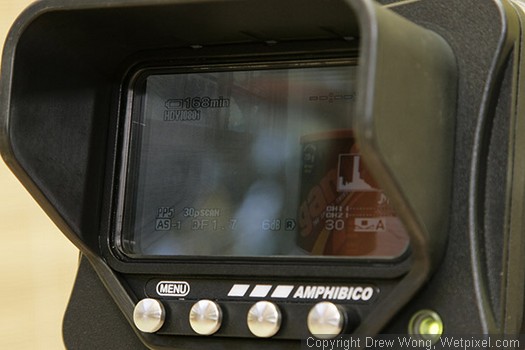 With the new 16:9 “HD” resolution monitor in the rear is a departure from the tradition viewfinder. It is also a very contentious addition, as many on Wetpixel have questioned the functionality of a rear monitor versus a viewfinder. To end this argument right now, I … can’t!  It works well as a viewer but in certain conditions, namely shallow bright water, it’s really not bright enough and there was too much reflection on the glass. The conditions I tested the housing in (many shallow dives with bright sunlight), quite a few times it was a battle to see what I was shooting. Obviously positioning the housing out of the bright light helped a bit. The hood could also be deeper and cover more of the monitor to minimize the effect of the reflections on the glass. The use of a non-reflective glass would also help.

The LCD monitor lasted for 4.75 hours plus (yes I actually timed it) with 4 2700mh batteries at 21°C, which should fit 4 long dives in a day without a change of battery. More importantly, the monitor shows the histogram, which while small and difficultly to see at times, allows the shooter to control exposure better than eyeballing the monitor (since zebra is still unavailable on external monitors)

Handling wise, the housing was very good, especially for wideangle. I was finning hard alongside a whaleshark and shooting with one hand and came back with very steady clips (which especially surprised me!).  The near neutrality of the housing made it so easy to use in choppier water at the surface too. With the standard dome port, the buoyancy is slightly more positive with less tilt to the left of the housing. There was space for 2 more of those screw in weights at the bottom of the housing. I had 4 installed to make it neutral again, but I was not supplied with these so I did not use the standard dome port in shooting dives.

The 8 screw holes on the top of the housing probably allow the attachment of an ball joint adapter for arms etc. I have no idea how that would affect the balance of the housing. The left control arm does have provision for turning on lamps from Amphibico.

With the shallower shots, having a single button to push for WB without having to lift one hand off the handle makes for easy shooting. The V1’s WB range isn’t fantastic, I’d say about 9db range, which means you’ll need to use the filter more often, which can sometimes negate the need of ND1 filter.
Another useful button I used quite a bit was Momentary Focus. It allowed the locking of focus on a given subject and since I limited the exposure to F5.6, fixing the focus to a certain distance and relying on a large f-stop to keep everything in focus wasn’t always an option, so this feature was very useful.

Continue to the next page for “Observations”