Another little contraption I brought along was the Sony HVR-DR60, which is a harddrive recorder/playback unit Sony released along with the HVR-V1. The one feature I was very interested for use in Africa was the 14 second cache recording that it had. Basically if you point the camera, the DR60 will continuous record on disk cache. When you hit the REC button, it’ll load the last 14 seconds along as a separate file. This means the DR60 allows .mt2 files to be stored in folders, much like the P2 system of Panasonic. This really helps in the workflow.

The DR60 uses the same L type batteries as the HVR-V1 and Z1 and lasts over 400 mins on the F970 battery. It can store up to 270mins of HDV 1080i or DV. With the HVR-V1, you can even record directly to the DR60 without a tape in the camera. For timelapse recording, this would be great both to save the recording head of the camera and allow for longer periods of recording.

Field Test
I was so excited with the simplicity of the setup of the DR60 I decided to be stupid and not read the manual fully. I used it with a HVR-A1 and V1. Setting up was supereasy. Connect the firewire cables, turn on the camera’s iLink and it’s done. You can turn off the cache recording, the backlight of the LCD readout and the 3G sensor, which is basically a Y axis accelerometer which disconnects the harddrive spindle if it thinks it’s dropping.

Since I was on a boat, I turned off the 3G sensor, just in case it decides that a 2ft drop in elevation from the chop is a fall. 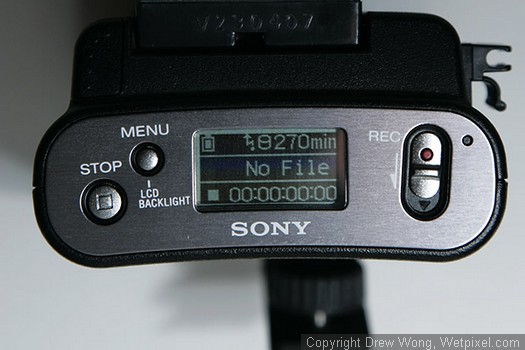 The DR60’s LCD menu and front. You can manually record to the drive as well

After setting it up, it’s good to go. There’s a symbol which tells you if the camera link is good and there’s a on/off button for the camera link as well. The menu scroll is done on the side and while the buttons are small, they were easy to access.

I used the cache recording function to record whale breaches since letting the camera run was a big waste of battery and tape. I had about 20+ breaches I recorded with the cache function, including 2 double breaches… or so I thought. I looked at the clips and I missed out right in the middle of the breach every time! Turns out in the manual somewhere, it says there is a 0.5 sec delay once you hit the REC button where both camera and drive STOP recording! After seeing how the Phantom HD and other cache recording cameras work, I just assumed there would be no delay… OPPS!

Once I managed to resist tempation to hit the REC button whenever I see action, allowing the action to pass on at least 5 sec before hitting REC, the system is actually very good. 14 seconds is a great buffer for stuff like whale breaches and the like.

The DR60 also works as a harddrive when linked to a computer. Pulling the HDV files out is like any computer drive, you open the folders out and copy it to your destination folder. As of now, there is no direct interface with any NLE to extract files like the P2 system.

There are of course some drawbacks, one quite serious as well. In my 2 months of use, the DR60 got corrupted 4 times, requiring a format each time to clear it. Each time the drive seized up while connected to the camera. The previous files were still on the drive but it would not record, giving an error instead. Perhaps the jostling of the camera caused the spindle to skip or something, but it was VERY annoying. I’ll trying it with 3G turned on next time to see if there is a difference. 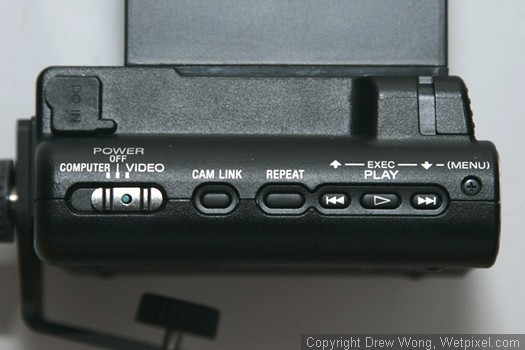 DR60 has its main controls for power, menu control and Camera link are to the left side of the unit.

Another annoyance (less so of a problem) is the mode switch. You can switch the camera to HDD or video mode or OFF. You have to push the green button on the slider to switch modes, but flick at the slider and it does it without the green button push. The slider switch is pretty imprecise with no real click to denote what mode it’s in. Many times I turned it off and it would switch to HDD mode or stay on. You really have to watch the LCD screen turn off.

Otherwise, the little nifty device is pretty good. It comes with a L bracket to mount on the camera and fastens tightly. It does make the camera more front heavy obviously and using it with the V1, I did get tired after several hours of hand holding. Is it worth the $1600 price tag? If you shoot anything that requires cache or backup recording, it is not the only choice for Sony HDV cameras. The workflow advantages are also there. It’s a little big to fit in most housings with a big battery but a small F550 could make it easier. However if you use Final Cut Pro, you have to convert the .m2t files into Quicktime .mov files before you can edit them. This is more an issue for Apple than Sony but is still nonetheless a huge problem. One workaround is to use MPEG Streamclip to convert the files.

There are definitely other alternatives including the excellent Focus Enhancement FS4Pro HD but none offer the elegant solution and the use of Sony batteries, not to mention the 14 second cache recording. So despite the failures and cheap slider switch, the DR60 is worth it for those extended seeking cache recording.

Cons
•    Harddrive corrupted 4 times while in use, requiring a reformat.
•    0.5 sec delay in cache recording mode.
•    Mode slider switch is loose and undefined, requiring a check to see if it is OFF.
•    No tapeless recording for older Sony cameras.
•    .m2t files not compatible with Apple’s Final Cut Pro without conversion.