A lot of people go to Guadalupe every year, a lot of very interesting people. Most people are divers, and some are non-divers that want to check “seeing-a-great-white-shark-underwater” off their bucket list. And then there are some that are a little of both. A few weeks ago astronaut Terry Virts headed to Guadalupe aboard the Somar V to film some great whites in 360 and from the air, as well as check something off his bucket list.

“Guadalupe Island to dive with sharks may be interesting, the actual experience of diving with them is sublime. To be underwater, out of our natural land domain, in the presence of one (or often several) of Earth’s most magnificent and deadly creatures is just impossible to put into words. I saw them slowly emerge from the deep, starting as shadows, then slivering and gliding up from the darkness directly at us, swerving to the right or left before they got too close. A great white coming up out of the deep looks more like a ghost or spectre, this small, dark grey shadow. Looking directly down on one surprised me, because I didn’t realize they had that rectangular shape. But when they swim alongside you there is no doubt that you are in the presence of a Great White. Apex predator. The distinctive massive, sharp, snaggly teeth. The big eyes that are always watching you. Tall widely spaced gills that usually had battle scars on them. The distinctive, no-doubt-it’s-a-great-white dorsal fin. And the white underbelly. No, you did not have to be a marine biologist to identify one.”

Read his full take on the experience here. 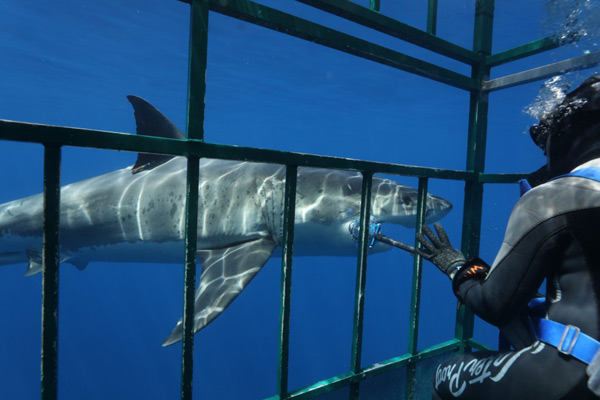