Backlighting When i was in my high school art class, we were asked to sketch a bowl of fruit using nothing more than a charcoal pencil. Our teacher told us to study the light and shadow’s to discover how they worked with each other to add dimension to our work. Sadly, my art skills resulted in a very childish looking finished product that resembled a stick figure apple with no discernible dimension what-so ever. My teachers words however have always stuck with me and have helped me to look at light and shadows in a very different way.

Years later, when i began working with my mentor for underwater photography, he too stressed the importance of light and lighting. Joe (my mentor), is a master of lighting that began his career shooting film. Using flash bulbs Joe would create show stopping images in the frigid waters of the Puget Sound, rim lighting sponges and backlighting basket stars even using models. It’s safe to say he was way ahead of his time.

Today, having gained some ground on lighting and lighting techniques, I can honestly say lighting is the number one most important feature in an image for me. Whether I’m shooting on land, in water, wide angle, or macro, I’m always looking at the light and the situation. And trying to figure out how to give the image a little more dimension. Shooting on land has taught me much about shooting underwater and visa versa. So I encourage anyone reading this to do both.

Food for thought: • You don’t need an in depth knowledge of light to backlight images, just try • Take control of your camera, stop using TTL and begin creating new images

Special Gear For backlighting, a torch with a minimum of 1000 lumens should be used and the light quality should have a white characteristic to it rather then orange. Many torches on the market also have red and blue lights built in, these are fun to use as well. Select a torch that provides a tight beam cast rather then a broad-cast of light. I made a small snoot using a PVC pipe, that i heated and formed to fit my torch head. This creates a strong column of light that provides for further control in the image and creates an immediate fall off of light.

Added Effect A snoot will help to control light in the foreground of your image when back-lighting, allowing you to apply strobe flash just where you want it.

Think of your cameras settings in a modular fashion. The shutter speed, aperture and ISO are the three main pillars that our images are built on. With these 3 settings a world of reciprocat-ing exposures can be made. Ultimately, these 3 controls will have similar effects over your im-ages but are designed to control the light in very specific and separate ways.

The basics ISO-Amplifies ALL incoming light. ISO will increase sensitivity to your sensor which is valuable for off camera lighting. The pitfall is contrast and burned highlights.

Shutter speed Is a setting the gets no glory underwater and a world of confusion surrounds it. Keeping it simple, think of your shutter as a dimmer switch for the ambient light. Shutter speed is also tied into your strobe flash and synch speeds.

Shutter opens, strobe’s flash (aprx. 1/10,000 of a second), shutter closes. The longer the shutter is open means more ambient light will hit the sensor plane, even after the strobes have flashed your subject. Shooting at your maximum shutter speed combined with the strobe flash is best for freezing a subject during the daylight hours and also results in a darker image in the background.

If you’re not using any strobe flash, then we are liberated from synch speeds.

Backlighting 101 Aperture: F-stop is used for color control, depth of field, fine tuning and controlling your hi-lights. Your light pool and front of the frame exposures can be flat if your F-stop isn’t high enough, so experiment.

Lens choice My favorite lens choice for backlighting is my 105mm or my 60mm lenses, each for different reasons. With the 105, the narrowed angle of view allows me to bring the torch close to my subject for maximum effect while keeping it out of the frame. For the 60mm, the angle of view is a bit wider which allows me to add different effects with the torch in the frame or out.

Subject selection It really boils down to your shot selection for learning and maximizing your backlighting tech-niques. Look for subjects that have translucent appendages and body parts, compressed body shape’s, that are hairy, have algae growing on them or allows light to be transmitted through it, respond the best. For silhouettes, select a subject with strong shape recognition and work with it.

The technique There are a few ways to go about this. Handholding the torch is one method for close tight work. This can also be done by a friend or a guide, but I always suggest learning on your own so that you know and understand what you want.

The second way, and the way I prefer to do it, is by using your torch off camera on or off of a tripod. First, place your torch behind your subject in a way that allows it to illuminate your subject without your torch intruding into the frame. Rake the light from behind and across your subject’s profile to bring out the subtle highlights. The intensity will gain as you begin to move into a more direct position. Positioning yourself directly opposite of the light with your subject in the middle will hamper your camera’s autofocus abilities and create a light path that is hard to manage. It is better to bring the light in from an angle so that you have better control over the “Fall off” of the light, using the shadow to give a deeper effect.

The shadow can be a blessing and a curse. While the shadow offers a nice contrast in the background, we must also recognize that the shadows can also hide important details. Your subjects eyes can become black orbs etc.

Backlighting with a fiber optic snoot: Probably one of the best methods for backlighting small subjects and will be discussed further in the next installment. 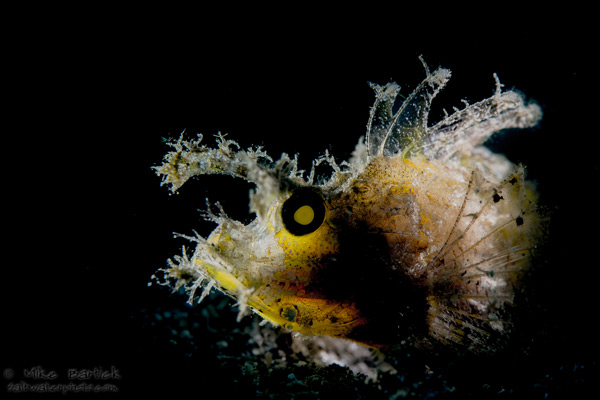 Ambon scorpionfish have always been a challenge for me to shoot well. Their brownish body shape resembles the substrate so well that they become hard to understand at times. My torch, used off camera in this image is placed behind and to the right of the subject. Strobe’s off, I position myself in a way that allows the light to rake the subject, highlighting its important features and making my adjustments accordingly. 105mm ISO 500 F 10 @ 1/200 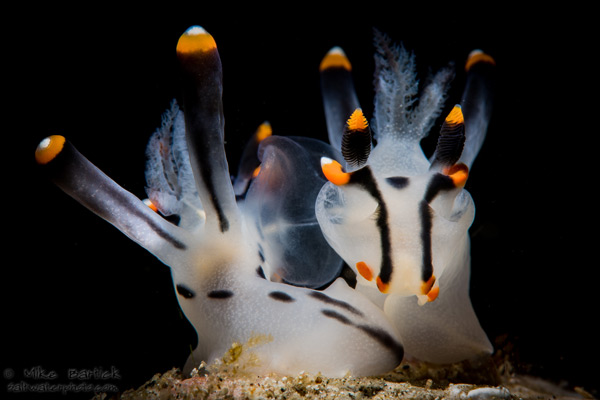 Mating “Pika-chu” nudibranchs. The sexual organs on these slugs remind me of the docking platform on the space station. The transparent sheath is easily lost without backlighting as your strobe flash will carry straight through and light up whatever is behind it. I’m using two forms of light in this image. One is a low powered strobe flash through a snoot and the other is my torch, backlighting the balloon shaped docking station that connects our subjects. 105mm ISO 320 F29 @ 1/200 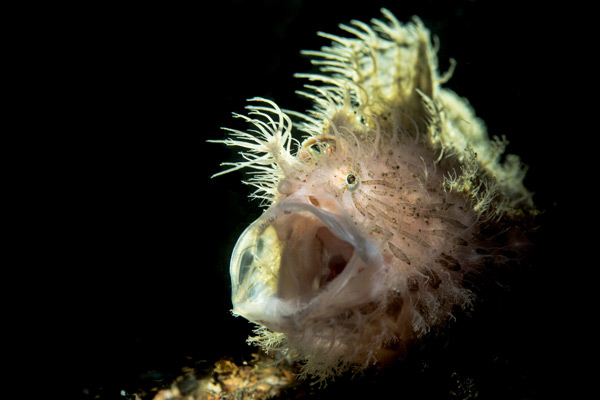 Hairy frogfish are one of the best subjects to practice with as they don’t swim away very quickly and are generally photogenic. The light is again placed frame right and behind the sub-ject, raking the light down and across from behind. Filling the shadow created in the fore-ground using my snoot, adds a little color back into the image. 105mm ISO 200 F11 @ 1/80 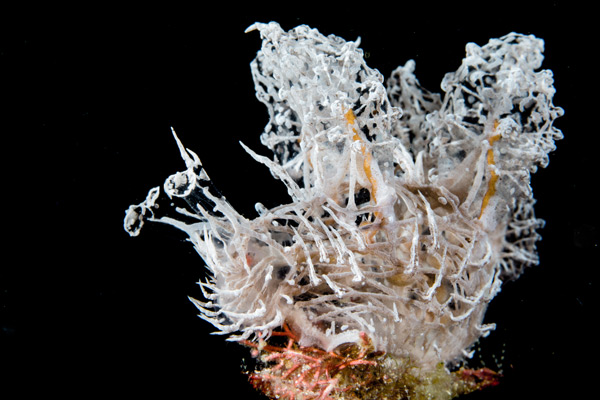 Melibe colemani is a bucket list subject for many of us, unfortunately they are also one heck of a hard subject to photograph. I used two forms of light on this image trying almost anything to make it work. I snooted it, backlit it, strobe flashed it, used colored lights, ambient light during the daytime, shot it at night (infested by worms) and more ways then i can explain. What finally did it was a simple backlight with foreground snoot. Fortunately i had several days to shoot this guy and returned over and over until I got it right. Not perfect but… ISO 100 F25 @ 1/320 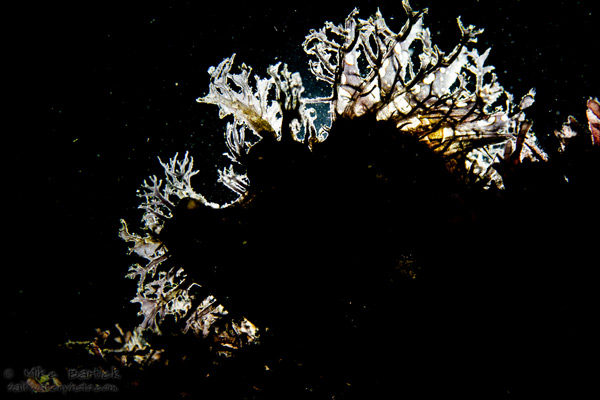 Rhinopias frondosa silhouette, wow talk about a beautiful subject to work with. Strong shape recognition, transparent appendages, compressed body shape and colorful. In the first image, I created a silhouette using my torch to be sure there wasn’t any ambient light leaking into the frame. ISO 200 105mm F9 @ 1/125 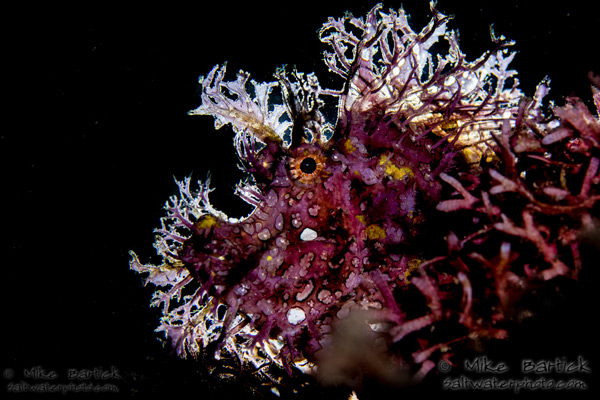 This image was shot a moment later with fill flash from my strobe angled down and into the sand trapping most of the light. This is also an effective way to decrease your strobe’s pattern when you dont have a snoot. Paying close attention to detail when shooting and knowing that the LCD lies, continue to shoot so that you will have plenty of images to work with later on. 105mm ISO 200 F9 @ 1/125 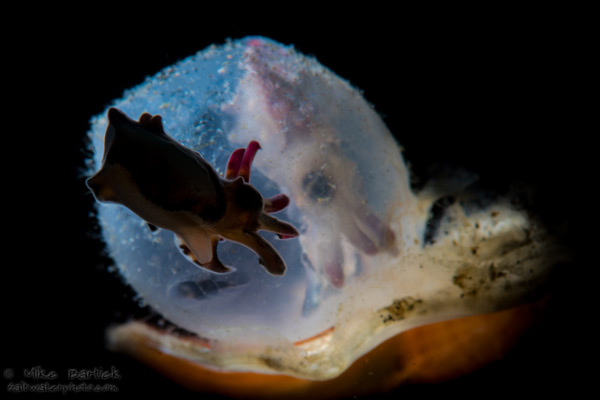 Flamboyant cuttlefish eggs are perfect for backlighting. Using only the light from your torch, light the egg(s) of choice and use your cameras settings to damper the ambient light. I was fortunate enough to have one of the eggs hatch while shooting this series adding yet another dimension to the image. 105mm ISO 200 F29 @ 1/200