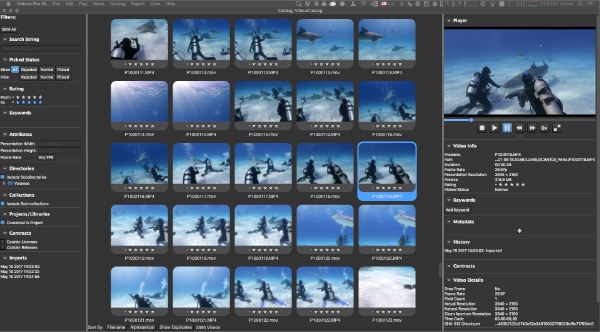 Wetpixel’s friend Chris Parsons has reached out to the Wetpixel community to ask video shooters to test the beta version of his new app, Videux. It is a video organizer, player and workflow assistant and is currently being tested for Mac only. If you have a large video library and would like to give the Videux team feedback on the beta of their app, please reach out to them.

We’re looking for people who shoot video to give our new app a try. It’s called Videux, and it is an organizer, player, and workflow assistant designed for video. More details below, including a short video overview.

The main thing we’d like from our beta testers is feedback. We want to know how it goes for you and what you like and don’t like about the app. No NDA is required. For details about the beta test program, please send us an email and we will get you everything you need to get started.

Videux is a new tool for stock videographers and people with large video libraries. It is a sleek video player complete with powerful playlist functionality. It is an organizer, helping you corral thousands or tens of thousands of videos with ease. It can keep track of things like model releases, license agreements, metadata and keywords, making it easy to see at a glance the state of your video library. Integration with Final Cut Pro X and Premiere Pro makes your workflow faster and easier.

And… we’re just getting started. We have plans to add a lot more great functionality to the app. We’ve built a terrific platform to do that on. So stay tuned for even more.

We’ve just uploaded our 4th Beta build, and hope you will install it and give it a try. The main change in this version is a feature you can’t really see, but it’s something we are pretty excited about: we’ve received approval from Apple to publish on the App Store. This wasn’t easy, we were concerned we’d have to lose some functionality due to some restrictions of “sandboxing” the app. We had some hoops to jump through to make it happen, but it looks like we were able to make it work without losing anything. This was a big step for us.

About 3 years ago I decided I really wanted to have an app that could help me organize my video clips - I already had several terabytes at that time and my collection was growing. As you probably know, it can be painfully time consuming to find video clips, to delete those that are not useful, to organize clips, to handle duplicates, and just to deal with the large amount of data involved with video. I looked, and did not find the tool I wanted, so our team went to work on it. We’ve worked hard, and the result is an industrial strength app. We’ve already tested it with over 100,000 videos, and we are not going to stop there.

I am excited to say that it is almost ready.

The final step in getting a released product out the door is a “beta” test, which means we put it in the hands of people who might want to use it. We know that this will find bugs, issues, and things we haven’t thought of. The goal is to make the product better so that on day one, it is a tool that people can put to use saving them time and hassle.

Underwater videography is a small part of the market for this product, but it is important to me personally, and I consider Wetpixel a “home base”. I very much look forward to any feedback we can get from the Wetpixel community.

Thank you,
Chris Parsons and the Videux Team