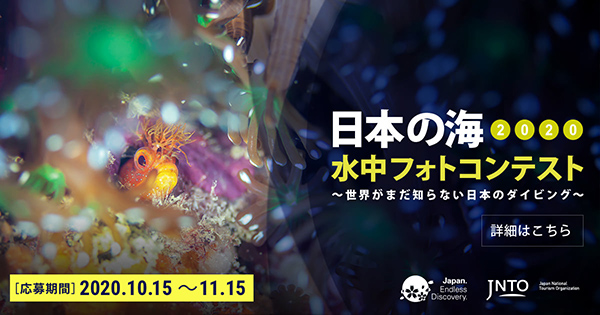 Wetpixel’s friends at Inon have let us know that the Japanese Government Tourism Bureau is hosting the Sea of Japan underwater photo contest. Open to images that could only have been shot in Japan; “from photos of species endemic to Japan to the unique views and one-of-a-kind colors that can be found in Japanese waters!” The contest is open now, and the deadline for entries is 15 November.

The Japanese Government Tourism Bureau (Jnto) will hold an underwater photo contest for the period from October 2020, 15 (Thurs) to November 15th (Sun).

We will be holding a ′′diving photo contest′′ to make the charm of diving in Japan even more around the world. We are looking for underwater photos that can be taken because it is a Japanese diving, such as the uniqueness, and Japanese-specific species of diving in Japan!

The Photos you have applied for will be used as a photo material in the diving tourism promotion project that jnto will be implemented in the future.