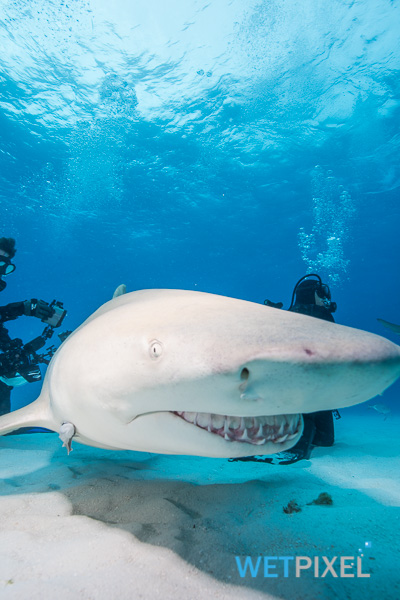 A coalition of Florida based shark divers launched a campaign asking NOAA to reconsider their decision to open commercial fishing for sharks in the Jupiter area from 1 January 2016, during the breeding aggregation of large sharks in the area. In response to this, NOAA (@NOAA fisheries) has replied on Twitter to their concerns. These replies specifically state that:

1. Hammerhead harvesting is by quota and hence sustainable.

CITES (to which the US is a signatory) states that the commercial harvesting of any species of hammerhead sharks must be shown to be sustainable. NOAA is hence behoved to show how they have reached the decision that this is the case in this instance. To date, there is no evidence to show that they have undertaken any study to determine the numbers of hammerheads in the Jupiter area specifically, or in the fishery area in general.

2. Quota and per trip limits for harvesting lemons and tigers. Max of 36 sharks landed per trip.

Local divers that regularly are in the water with these animals are definitive that given the number of sharks extant in the area, three or four trips of landed sharks (note this excludes any caught as bycatch and hence discarded) will decimate the shark population to non-sustainable levels. These large sharks are gathering to breed in the early part of the year, which makes them especially vulnerable to over exploitation.

3. As tigers and lemons only account for 4% of the catch (nationally, globally?) this means the above is sustainable.

NOAA do not state in their Twitter replies what this 4% figure is based on. Even so, perhaps the low number of these species caught points to species decline that is due to poor fishery management? Generic fishery figures are also of little relevance in an area that has a breeding aggregation that will occur during the actual period that NOAA proposes to reopen the fishery.

NOAA and others, including renown and vocal shark scientist David Shiffman point out that a consultation was held regarding the the change and that this did not result in any issues about the change being raised. This, they (and Mr. Shiffman) feel therefore means that the public should not protest about the change when it came to light once the allotted time for comment has passed.

The fact is that the consultation was announced and input sought via an arcane and hidden (from the vested public) channel in the federal government, rather then via any meaningful dialog with local stake holders or shark scientists. Perhaps predictably, there were very few comments. If NOAA are truly serious in balancing the needs for shark conservation with those of the fishing industry, and genuinely wish to serve the public to whom they are responsible, a consultation that gets very few comments is an abject failure and further attempts should be made to solicit meaningful input.

On the Federal Regulations site, NOAA make quite clear they base their decisions on commercial viability rather than long-term sustainability:

Rather than accept the status quo, please contact NOAA fisheries, either via their Facebook page or on Twitter or by email. Even better, via all three!