Aquatica’s housing for the Canon 5D Mark II followed their new design philosophy to reduce weight and bulk by using machining the housing from a single aluminum block. The housing I tested came a little later after the Sea & Sea, so it benefitted from my experience with the Sea and Sea, Ikelite and Seacam housings. However, it was also under more scrutiny being the last housing on the list.

As before, I mixed and matched different components. I used the Inon 45° viewfinder from Backscatter, using their adapter which connects the viewfinder to Aquatica’s VIEWFINDER port hole (they have adapters for various makes) for many of the dives, since much of the diving was going to be macro in Bali.  The ports were the 8” acrylic dome port and the manual focus port with extensions. I didn’t have my 16-35 II so I only tested the Tokina ATX-Pro 17mm f3.5, Canon 15mm Fisheye, 24-105L and 100mm f2.8 macro. The strobes were a pair of Hartenberger 250TTL using the N5 and S6-N5 cable connections.

Scorpionfish shot with 24-105L with +3 diopter. This was a test of the AF to find a small subject in a busy area. It did well.

Aquatica’s housing is distinctively covered with a rough/sandy texture over its aluminum body, giving it a rugged and tough look. It also looks and is the largest of the aluminum housings I tried. The housing is designed to go 90m/300ft and thus the walls are thick, thus the weight is a relatively heavy 2.9kg (6.6lbs). 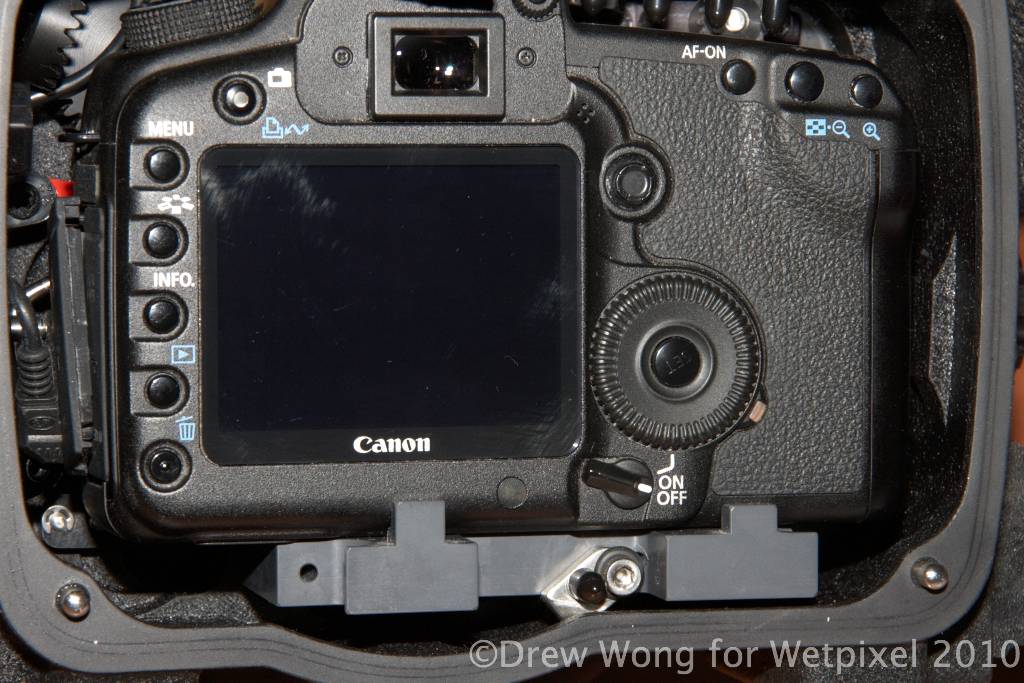 The 5DMark II in the A5D2 housing.

The extra weight isn’t just the extra thickness. The Aquatica comes with quite a list of features including a port locking device, lens release lever, hydrophone, 2 strobe connectors and all the usual controls for the camera.

The left panel controls of the A5D2

The top controls are all there along with a window for the top LCD display. Controls for the camera back include the full row of buttons on the left of the LCD monitor of the camera (MENU, INFO, PICTURE STYLES, PLAYBACK and TRASH). Like the MDX Pro, these buttons are angled 20° to the left for ergonomic feel. The mode dial extends backward from the rear, with a small window for the user to see which mode the camera is in.

The right hand controls are ergonomically designed with the AF-ON and AF Pt Selector buttons sharing a lever, which can slide to either function by either pulling the level out all the way or pushed in fully. The * function has its own button at the back of the housing.

The hot shoe for the strobe OEM by Subal

The test housing had one S6 and one N5 strobe connector. Canon’s eTTL protocol is only available using the S6 connection with a TTL converter like the Heinrich Weikamp or Seacam’s Sea Flash 150/250.  The nice thing about Aquatica has both connections and can custom fit the strobe connections to the customer’s request as part of the housing order. It can even be fitted with optical cable systems like the Inon and Sea & Sea direct from the factory.

The 2 rods which the camera shoe slides into.

The manual recommends installing the camera body sans lens, then install the lens after closing the rear bulkhead. There was a time before sensor cleaning cameras where this would not have been a wise move as dust contamination was an issue. The 5D2 and most other newer DSLR have built-in sensor cleaning which can remove much of the dust, and thus it’s less likely an issue. Still, care should be taken on not having the sensor area exposed for too long.

The strobe assembly mounting is a bit trickier. The housing I tested had the S6 eTTL compatible strobe board which is a Subal OEM, which meant the user has to choose between TTL and manual modes by flipping the dip switches on the board.  I’m a little unaccustomed to this layout since my own housing is wired so that the S6 has all cables connected and the N5 just the 2 wires to fire manually.  However, since I shoot mostly manual anyhow, I left the switches in the off position.

The hot shoe assembly is a ribbon style and is attached to the housing via a Velcro catch on the top. The manual suggests first installing the camera then put in the hotshoe. I tried that and managed to crimp the ribbon because it was too stiff to bend behind the tight area between the camera and housing wall. The fit is pretty tight. I tried a few times and finally just removed the Velcro holding the ribbon and hung it outside while I fit the camera. Then I slid the hotshoe in after.  After that, it was easy to replace the rear cover and lock the latches. I should add I’m not sure if this was an aftermarket addition or from the factory.