Close Focus: The story behind the image.

THE MANTA RAY WORLD BY NIGHT 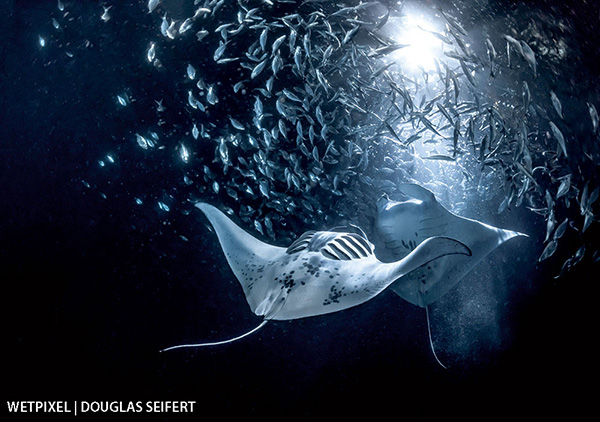 Making compelling, interesting and/or beautiful images of natural history subjects is challenging at the best of times; making those images in the ocean environment takes the process to an entirely different level. It requires preparedness, patience, determination, planning, some degree of luck, competent diving skills and sensory awareness of personal space in the immediate surrounding environment, awareness, intuition – and most importantly – instincts.

For the most part, I do not believe in once in a lifetime opportunities in nature. I have been in the field thirty years and I have seen more than my fair share of uncommon encounters, rare phenomenon, and undocumented behavior. More often than not, more than once. Some were discoveries new to the world’s knowledge; some were simply freakish but all but one or two have since been witnessed again, by me or by others. I know things in nature happen with a degree of regularity according to their own unrevealed frequency – so the question really is: “do you want to put yourself into the same set of circumstances months after months or year after year to achieve an image you may have missed or not-quite-gotten the first time?”

A few decades past, back in the era of color slide film, and when a certain mass market publication was unquestionably relevant, David Doubilet produced a beautiful portfolio of manta ray images at night using a movie light. Those published images were beautiful, novel and ethereal and remain touchstones of iconic, artistic interpretations of sea life. But each generation brings its own reinventions and I was interested to see what I could create with the elements of manta rays (my much beloved, favorite sea creatures), darkness and light. I also wanted to see for myself what goes on with things that go splash in the night.

After a fun but lackluster dive trip off the Kona Coast attempting to use lights from a liveaboard dive boat yielded indifferent photographic results, mostly due to weather and the distance from the lights’ area of coverage to where the mantas were actually feeding, I decided to return to Kona without the liveaboard and concentrate on making a serious attempt to obtain the images I imagined in my obsession.

The image of two reef manta rays (Manta alfredi) in the darkness of night feeding upon plankton attracted to lights among a school of Hawaiian flagtail (Kuhlia xenura) was a variation of many, many, many visualized images I had storyboarded in advance during the planning of the shoot. Although the depicted behavior may happen on a nightly basis, under cover of darkness who really knows what goes on without a human witness to report back, the opportunities to make this image did not “just happen.”

The nightly manta ray attraction dives in Kona, Hawaii are well-known and thousands of divers and snorkelers visit yearly. Many have GoPros or SLRs so there is no shortage of imagery documenting this activity.

But what goes on when all the dive and snorkel boats have left was really the image I wanted to interpret, create, and present.

In order to achieve this, there was all the logistics of getting to Hawaii and working with a licensed, professional outfit to ensure safety. I was lucky in that I had a relationship with Jack’s Diving Locker and they were cooperative and open minded. It was not easy or convenient as the process of photography could not start until late hours after the other boats had left so as not to detract from the dive and snorkel experience of other visitors. The “campfire” is a shared resource among a dozen plus operators and belongs to no one.

In addition to having a boat onsite in the late hours, we also needed a 500 watt movie light powered by a generator to produce the intense, focused beam of light that would mimic moonlight. My lighting coordinator, Jesse Andrewartha, spent hours designing the set-up and putting it into operation. His professionalism and expertise made the shoot the success it turned out to be.

The intense movie light also attracts the copepods high into the water column away from their benthic haunts and the concentration of planktonic food also amassed the school of Hawaiian flagtail (Kuhlia xenura) that were frenetically feeding upon the copepods.

By contrast, the manta rays performed a measured, balletic barrel-roll feeding method to efficiently exploit the concentration of copepods gathered in one locale, gulping vast amounts of plankton and remaining relatively stationary in the water column.

The deliberate off-center framing to emphasize the black negative space, the relatively monochrome nature of the sea at night with silver fish and the white bellies of manta rays, interacting in their own way as illuminated by shafts of light – as well as the truly alien physique of the manta rays – imbues the viewer with a sense of ‘the super’ in the supernatural.

Very minimal strobe power was used, along with a very high ISO, on a wide angle lens and floating in the midwater darkness of a late night sea while surrounded by black water and enormous rays gliding and swimming through the darkness was both beautiful and eerie, the definition of awe.

The framing was deliberate, to allow for a double page spread, which the final image did see presented as such, in not only DIVE Magazine, but also in DAN Alert Diver in its recent presentation of my oeuvres.

The shoot took place over three nights. One night we were forced to leave after forty minutes due to a localized, violent and frankly terrifying electrical storm (when you are on a small boat with a long camera light on boom out over the water to all appearances looking very much like a lighting rod, your mind tends towards imagining the worst, Darwin-Award-type thinking of imminent catastrophe or death). It was the Captain’s decision to pull the plug and, disappointed as we were, no one with a brain argues with safety first. My wife, her niece and my goddaughter were onboard so it never entered my mind to ride out the storm. Really! Other nights, we had to endure long hours waiting for other boats to complete their tours and safely get their people out of the water so we could begin our production’s light show.

On one night the ‘wrong’ mantas turned up. Although in theory there is no such thing as a ‘wrong’ manta ray, the ones that were prominent on this night were the ones that exhibited disfiguring injuries in the form of missing cephalic fins and/or festering abrasions – not exactly the healthy, glamorous, unadulterated ‘models’ envisioned for the dreamy atmosphere I wished to convey. Their injuries called attention to themselves and although terrific to document for the aspect of the natural history story of anthropogenic threats to manta rays, not at all what was sought after. I made the images anyway and used them in the story regardless. Only on one night of the three did all the components come together to approximate what I had envisioned.

In retrospect, I could have used another night. Or another two nights. Or three. But then again, it was such a brilliant and breathtaking experience, I could have gone on another ten or one hundred nights, had the budget allowed…

And let us not discuss the budget. It was hellishly expensive. The cost of travel and infrastructure, on top of the not-inexpensive equipment costs, is truly the ultimate bar to emulation, imitation, or inspiration.

So we do what we can with what we have.

More than anything, it helps to have a supportive spouse and luckily for me, my wife Emily provides the moral support essential to go from destination to destination, month after month, year after year, and chase those visions of undersea creatures, encounters, situations and phenomenon with all the enthusiasm and wonder that one body can contain.