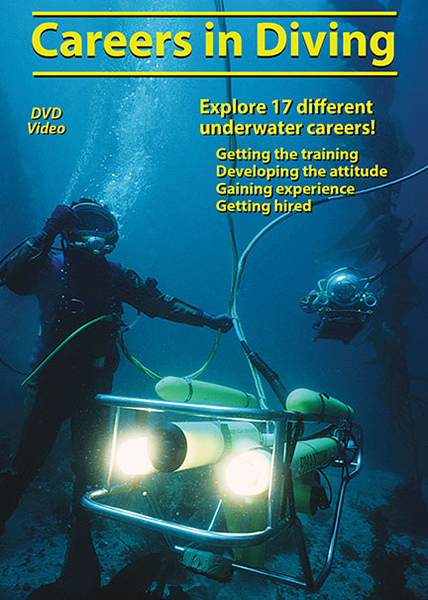 A new DVD has been released that showcases potential careers in diving. Included among the occupations are the roles of underwater photographer, cinematographer and wildlife videographer. The featured professionals in these fields are Amanda Cotton, Hilaire Brosio and Lance Milbrand.

For anyone who loves the ocean, being outdoors, traveling, and meeting interesting people, a career in diving might just be more adventure than work! Underwater videographer, Steve Barsky and his marine biologist wife, Kristine, spent more than a year interviewing and filming divers in California, Washington, and Little Cayman to produce a new DVD video that explores 17 different careers that take people underwater to do their jobs. In this DVD, learn what skills are needed for each job, where the jobs are, and what it takes to succeed.

Each interview in Careers in Diving also includes photographs and/or video footage of the actual work that each person does. Included are marine biologists tagging lobsters, sheriff’s divers jumping from helicopters, underwater photographers filming sharks, marine scientists diving under the ice, and much more! Each diving professional explains the positive and negative aspects of their jobs, although unanimously, each person interviewed is enthusiastic about what they do.

Careers in Diving was written, directed and filmed by Steven M. Barsky, a full-time professional in the diving field, who has worked as a commercial diver, underwater photographer, diving author, and diving consultant.

The run time for the program 125 minutes, but each interview can be individually viewed via the scene selection menu. The disk also includes several bonus features including deleted scenes as well director and producer bios. The program is delivered as a Standard Definition 16X9 DVD video. ISBN 978-0-9740923-7-9