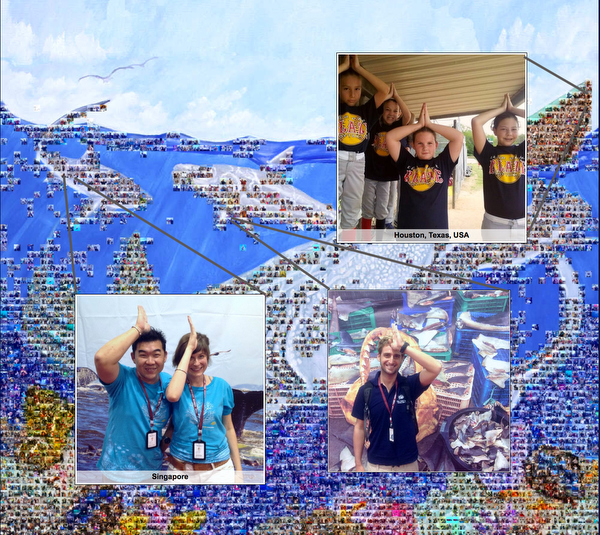 The Sea Save Foundation is making an urgent appeal for people to submit images of themselves “giving the fin”. The images will be incorporated into a digital artwork mosaic of 20,000 images of people worldwide expressing their support for shark conservation. This will be presented to delegates at the CITES conference in September, in order to pressurize that body to enhance the global protection of shark species.

It’s a Wrap! Malibu Based Sea Save Foundation, Will Complete Online Ocean Conservation Photo Mosaic by September 3rd. There is Still Time to Upload your Image.

Malibu, California - August 25, 2016 – Sea Save Foundation will wrap up its highly successful, “Give ‘Em The Fin” campaign in early September, just in time to unveil this digital artwork at the ten day Conference of International Trade of Endangered Species (CoP17) in Johannesburg, South Africa convening on September 24th. This meeting, which was recently featured in the award winning film “Racing Extinction”, is where the international community debates and votes upon which threatened and endangered animals will be protected under international trade agreements.

This powerful mosaic will showcase 20,000 images of people “Giving the Fin” uploaded by ocean advocates around the world underscoring the fact that pragmatic shark protection and the resulting conservation is a critical issue not separated by political boundaries. Participants understand that sharks are keystone species necessary to maintain healthy fisheries and oceans worldwide.

Over the past three years Sea Save has been enlisting thousands of people wanting to help shed light upon the critical issue of plummeting shark numbers. Photographs uploaded by participants giving the international sign of the shark, a hand held on top of the head symbolizing a dorsal fin, are incorporated into an interactive mosaic. There is no cost to entry and anyone can upload an image, but the deadline for entry is September 3rd.

“We are particularly proud of this campaign,” explains Sea Save Foundation Director Georgienne Bradley. “Children, school groups, divers, families, scientists from around the world have uploaded. We think it is absolutely ‘FIN’tastic that we are receiving uploads from places as distant as Palau, Fiji, The Maldives, Antarctica and beyond! People realize that sharks are critical to the future of humans as a species. Collapsing global fisheries due to low shark numbers and marine imbalance is already in the headlines and will cause global hunger if we do not turn this tide.”

Sunset House, in Grand Cayman, Cayman Islands is supporting this effort by offering a week for two at their resort as a prize for the most creative upload. To view the mosaic, upload your image, or learn more about this campaign go here.

Sea Save Foundation is a Malibu-based 501 c (3) ocean conservation organization. Sea Save works to generate consciousness, encourage stewardship of natural ecosystems, and facilitate change in public policy. Learn more about the Sea Save Foundation.