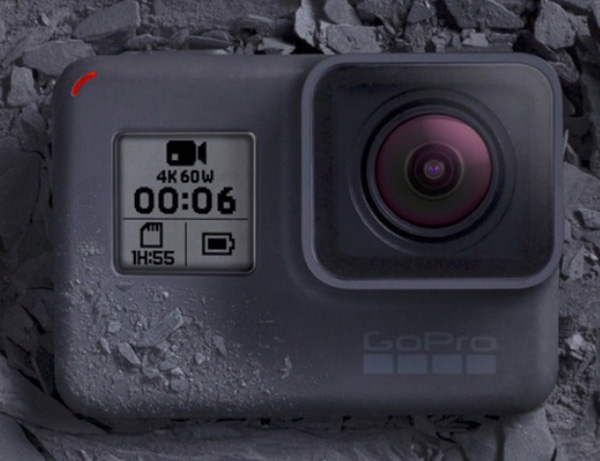 GoPro has announced several new products including the HERO6 action cam. The latter features a new GP1 processor and captures 4K60 and 1080p240 video. It also has “advanced” image stabilization, improved dynamic range and low-light performance. It is waterproof to 33 feet (10 m). In addition, the company has launched the Fusion VR cam.

GoPro’s founder and CEO, Nicholas Woodman, introduced the HERO6 Black and Fusion cameras to an international audience at the California Academy of Sciences in San Francisco, California. Watch a replay of the live event HERE.

With stunning 4K60 and 1080p240 video packed into a rugged, waterproof, go-anywhere design, HERO6 Black and the GoPro App automatically transform your adventures into cinematic QuikStory videos you can share with the world. HERO6 also has dramatically improved dynamic range and low-light performance to really make things pop, and an added digital zoom just to get crazy.

HERO6 Black is now available on GoPro.com and at select retailers worldwide.

QuikStories is an app feature that makes it easy to share short videos of your adventures. HERO6 is optimized for QuikStories with 3X faster Wi-Fi. This means your footage will rapidly transfer from your GoPro to your phone where the GoPro App will automatically create QuikStory videos for you.

With its ability to capture immersive 5.2K spherical content, GoPro Fusion marks the beginning of a new creative era. Fusion captures everything around you so you’ll never miss the shot, and gimbal-like stabilization makes it all shockingly smooth. Use the GoPro App to play back and share your footage as VR content or use the app’s OverCapture™ feature to recapture and share your spherical shot as a traditional fixed perspective video.

GoPro Fusion is currently available for pre-order on GoPro.com for USA, Canada, United Kingdom and the European Union, shipping in November. Create stunning edits using the bundled Fusion Studio desktop software available when product ships. The OverCapture mobile experience will be part of a new version of the GoPro App available for iOS and Android in early 2018.

KARMA – Take the Lead. Karma will tag along
Karma is ready for HERO6 Black and features two new auto-shot paths: Follow and Watch. Using GPS, Karma can now automatically follow the Karma Controller while you’re on the go, keeping you framed in the shot. The Watch auto-shot path will keep Karma hovering in place while it rotates, keeping the Karma Controller in frame wherever it goes. Other new Karma updates include an expanded Cable-Cam auto-shot path and “Look Up” camera tilt capability.

Shorty – The ultimate pocket-able extension pole and tripod, perfect for any activity.
The Handler – An updated floating handgrip with a quick-release mounting feature.
Bite Mount + Floaty – A versatile bite mount with an easy-to-spot float, ideal for POV.