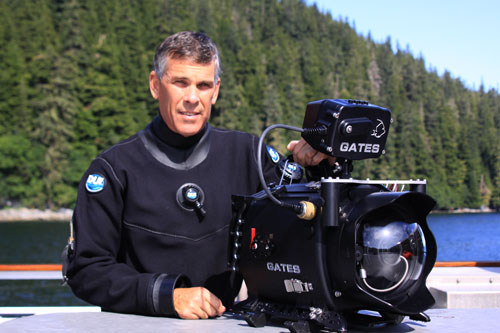 On July 19, 2009 I disembarked the Nautilus Explorer after spending two weeks diving in Southeast Alaska. This was my first experience using my RED ONE camera in the new DEEP RED underwater housing.

A couple years ago, John Ellerbrock (owner of Gates Underwater) approached me with the idea of collaborating on the design for DEEP RED. He asked what specifications I thought would make the best possible professional system. I gave him the following criteria:

My coming up with these specifications, although derived from a lengthy career of designing and using professional underwater motion picture housings, was the easy part. Implementing the design would require a bit of genius. John and the Gates Engineering Team were more than up to the task. Three features on the housing are absolutely brilliant and represent major innovations in housing design. One is a control that allows the use of the multi-function joystick on the back of the RED ONE. This amazing control tilts, pushes, and turns yet remains waterproof. By using it, all the camera menus can be accessed as easily underwater as on the surface – even while wearing the heavy dry suit gloves required in Alaska.

The second brilliant feature is the lens gear design. John came up with a lens gear arrangement that allows the use of nearly any lens from Nikon digital still lenses to Arri Ultra Primes. Changing lenses takes a matter of minutes and the same gear blocks can be used with a wide variety of different lenses and lens mounts. Every underwater cinematographer who has struggled to mate lenses with housing gears will be enormously impressed with this design. If you decide to use Nikon lenses, as I have, you can use essentially any Nikon lens without modification. A variety of port extensions are available to allow for the length of various lenses. But the gears will work with any Nikon lens as well as Ultra Primes and other PL mount lenses.

When I left for Alaska, the newest Nikon mount was not yet available for the RED and so I left with a rather jury-rigged aperture control that worked but was occasionally problematic. The new mount should be available by the time I get back to California.

During my Alaska trip I used two lenses on my RED camera inside the DEEP RED housing. For macro and most fish-sized subjects I used the Nikon 16-85mm lens behind a flat port. I only made a couple dives using this set-up mostly because the cold water and currents left me impatient with setting up a tripod. When I went to the trouble, I was able to capture nice close-up images of rockfish, sea anemones, and nudibranchs then zoom wide to capture a good section of reef. During most of my dives I used the Tokina 10-17mm lens behind a dome port. This lens has a range from full-frame fisheye to about 100 degrees and it focuses right up to the dome port. The Gates dome is 8-inch glass and has anti-reflection coatings on both sides. Acrylic ports are also available.

The 10-17mm lens was a good choice in water visibility that seldom exceeded twenty feet. By getting really close to fish and invertebrates I was able to eliminate a lot of the murk that inevitably degrades images in poor water visibility. Irish Lords and lingcods shot from less than a foot away with the 10-17mm make rather spectacular compositions.

The DEEP RED housing handled very well with both lens set-ups. In fact, it felt like a much smaller housing than my Sony 900 system (it weighs 10% to 20% less than the 900 system depending on lens selection). John designed a system of one-pound trim weights that slide into slots on the bottom and top of the housing as well as into slots on the longer port extensions. I didn’t like this idea when he first proposed it, preferring trim weights mounted inside the housing. But after using his weight system I was converted. It was great being able to adjust the weights underwater. I found that with either lens the camera required no more than four one-pound weights.

When John and I first discussed housing designs we briefly considered a tubular shape with battery and hard drive mounted behind the camera. At the time, I questioned the need to access menus while underwater. It turns out that in Alaska I often accessed the menus. I found myself regularly changing shutter speeds and occasionally ISO settings. And though I didn’t use it on this trip, I look forward to accessing the pre-record feature made available with the most recent firmware build. Focus assist and white balance were programmed to user buttons on the left side of the camera and were easily accessible by a Gates housing control. Three other user-programmable buttons are also accessible on the back of the housing. And a sixth is available on the LCD monitor housing.

The LCD monitor housing includes the third truly brilliant innovation. The buttons on top of the monitor are accessible with magnetic repulsion buttons that require no through- hull penetration. The LCD screen was viewable in all conditions that I faced and was only difficult to view (though still usable) when in shallow water with direct sunlight coming over my shoulder and into the port. The focus assist feature made critical focusing easy. And the Gates control makes turning focus assist on and off a snap. When I first looked at the RED ONE I was pretty sure I would want to use the Electronic Viewfinder in a tubular housing. But after using the LCD monitor, I quickly shelved that idea.

The only camera feature that was not made available on this first iteration of DEEP RED was playback. Since I have never had underwater playback available I didn’t miss this feature. John intends to modify the housing so that playback will be available on future versions. I suspect that once I have it, I’ll use it. Certainly, directors working remotely with underwater cameramen will appreciate this feature.

Standard on the DEEP RED housing and available on other Gates housings is a vacuum system. Using a small 12-volt vacuum pump you can pull a slight vacuum on the housing after assembly. Then using a vacuum gauge to check that the pressure is stable before your dive simply eliminates floods. I’ve been using this system for more than ten years and haven’t water damaged a camera since I implemented the system.

For many cinematographers considering moving to the RED ONE, workflow has been a concern. This was also true for me. But I actually found it to be less troublesome than reviewing HDCAM tape from my Sony 900. It takes less than a minute to depressurize the housing, pull off the rear bell and remove the drive. After every dive I pulled the drive out of the housing and downloaded all the new clips. Since my shooting was relatively limited, the download only took ten minutes or so. Adjusting the image with Red Alert and viewing the resulting QuickTime proxies was surprisingly easy. I won’t go into the details of my workflow here since there is a good chance I did something horribly wrong. To be safe, I never erased my drive and will be able to repair any workflow errors when I get to my edit room. But assuming I did it right, removing the hard drive, backing up the clips, and viewing them on my laptop was considerably easier than pulling my whole Sony 900 out of the housing, hooking up a bulky monitor, and viewing the tape using the camera as a player.

The bottom line is that Gates has done a fantastic job designing the housing. It’s probably the most versatile underwater system I have ever owned.

UPDATE: To see or download full-resolution frame grabs from Howard’s Alaska trip, please see the gallery hosted at Eric Cheng’s site. Click on the thumbnail of the image you want to see, then mouse over the large image and click on “original.”