With great regret, we’d like to inform our community of the passing of Ike Brigham, founder of Ikelite Underwater Systems.  Founded in the early 1960s, Ikelite had a huge influence on the birth of consumer underwater photography and continues to shape the underwater imaging market today.

In December of 2001, Ike joined Wetpixel as member #15, only 4 days after our forums were launched. During his time here, he posted 939 messages full of his notoriously self-deprecating, dry humor.  Our staff and users came to love the “Addled Shopkeeper” (his self-appointed title), and as a representative of his company, Ike’s integrity was unparalleled.

Five years ago, I took a vacation from my software job and jumped into the water with a brand-new Ikelite underwater housing in an attempt to take underwater photos for the first time. As always, I put the photos up on my personal website and went back to normal life.  A few months later, I received an e-mail out of the blue from someone named “Ike”, whom I could only presume was involved with Ikelite in some way:

You got some spectacular results, but I am not comfortable with the depth problems you encountered.  This was one of the first of these we produced. Do you want to send us the housing for evaluation so we can repair or replace whatever is necessary?

I was impressed.  Without any solicitation whatsoever, the owner of the company behind the equipment I had been using had found—and read—my insignificant little (personal) website and had reached out in what I would discover to be the highest level of service in the industry.

Two months later, Ike joined Wetpixel. As our website here grew over the years, Ike wrote me constantly with ways he thought we could be improved the site.  And then, in March of 2005, I received this e-mail:

New Wetpixel is working fine with nothing for me to complain about.  You know that is against my nature…........

It may seem silly, but it made me really happy to know that we were providing a way for Ike to share his colorful personality with so many people who use his products.

Rest in peace, Ike. We’ll all miss you dearly.

Ike was a true pioneer and really invented the ability for hobbyist/photographers to take there cameras uw at a reasonable cost.

When I first learned to dive in 1969, there were only very expensive metal housings available. Divers were tinkering around making plex boxes, but controls and one-piece boxes that were durable were hard to figure out.

Ike came up with the idea of kits and controls you could buy to house your camera. He talked to divers and helped them to figure out their systems, learning what they wanted as well. They were very popular and created an instant industry. He expanded and innovated into the company they are today, never forgetting his “garage roots”.

I always enjoyed trading emails with him and will miss his curmudgeonly ways and funny posts. Enjoy your endless supply of Black Jack Ike!

Ike set a gold standard for customer care and had a wonderfully dry, self-deprecating sense of humour on the forums. He will be sorely missed and fondly remembered.

Our small underwater community has lost a great innovator, supporter, and friend. As many on this forum know, Ike set the bar high in customer service and personnally touched many of us.

Ike was very helpful to me when I was about to embark on my research project studying on Manta rays in Bali. Sadly, my housing developed a crack on the base and needed urgent repairs. He not only stopped production on the line to manufacture a replacement housing, he also sent it via DHL just to get it to me on time; Making this project a successful one.

Ike was indeed a great supporter of the the art and science of underwater photography. He and his associates at Ikelite set a standard for innovation and customer service that any company, in any industry, would be proud to emulate. It is ironic that as I was reading the tributes you all set forth this morning, the Ikelite banner resided on the top of the page. One more indication of his dedication to the UW photo community.

With the sadness of Ike Brigham’s passing comes the realisation of the enourmity of his contribution the imaging community - not just as provider of equipment -but as the author of the those light hearted moments from the addled shopkeeper….

With sadness I learnt of this news, my deepest condolence to Jean, Duanne, and all at Ikelite. Ike is a legend in the industry especially among underwater photographers – his kindness and thoughtfulness has helped many of us to achieve great success. He is the light of all my underwater images. I will remember him well.

I’ve never met Ike in person but I did meet some of his children - of the plexiglass variety. It is clear from Ike’s messages to this forum, his website, manuals, and products that he poured his heart and soul into his work and his customers. He often seemed to care more about our bottom time than his bottom line and that is becoming a rare attitude in today’s world.

I first met Ike in 1964 while working for Dacor Corp. when I was in high school.

He was always most gracious with his time when confronted with questions from a very young UW photographer and remained the same through the years.

A dedicated pioneer who will definitely be missed. 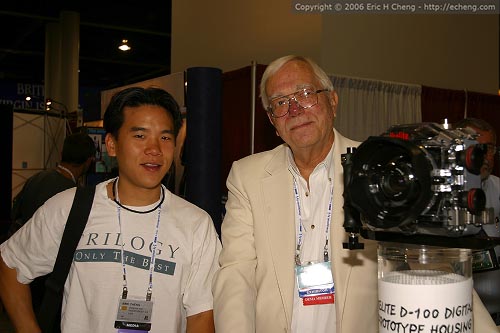