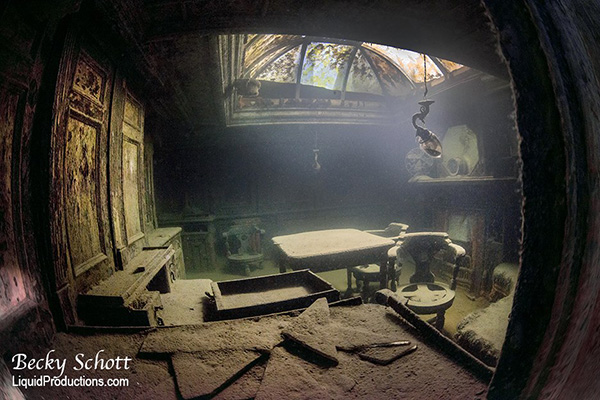 This is an image taken on the Yacht Gunilda peering in through an open window to the parlour area. She was a luxury yacht that was cruising around the northern part of Lake Superior, Canada in 1911 when she hit a submerged reef. They attempted to pull the ship from the rocks but it rolled, flipped and sank into 270ft of cold, dark, water where she remains today. Diving this ship has been a dream of mine and it’s known as one of the most beautiful shipwrecks in the Great Lakes.

The concept for the image was to light up the skylight as if the sun were pouring down inside this stunning room that has been frozen in time. The image was taken in 250ft, 38°F water which was very dark, so all light is artificial. It took a team of 4 lighting the skylight using several Light & Motion Sola 9600 lights just above the window to act like an artificial sun.

The windows were just about big enough to fit my Aquatica housing with Nikon D800 inside for the shot. I had to be very careful to not snag my drysuit on the glass from the broken windows. I also stayed outside so as not to disturb any delicate silt inside the wreck since we could only spend 20 min at this depth to get the shot. It was planned ahead of time, talking with a team of friends that are experienced technical divers using rebreathers and trimix for the dive. It was like a coordinated dance in which each person would be positioned to light the skylight and through a window. I used only the light provided by the team with nothing additional on camera. Given the depth, the entire dive needed 1 hour 40 minutes of decompression resulting in 2 hours total in the water.

It was shot at a f/stop of 5.6 at 1/20 second with an ISO of 2000. Diving the Gunilda is like going back 106 years and swimming along the decks of an underwater time capsule. When peering into the room with a clock over the fireplace, lights, a card table and the stunning woodwork it is an example of living history. It is easy to imagine what this magnificent ship would have looked like as it sailed on the surface. For more images please visit www.LiquidProductions.com.