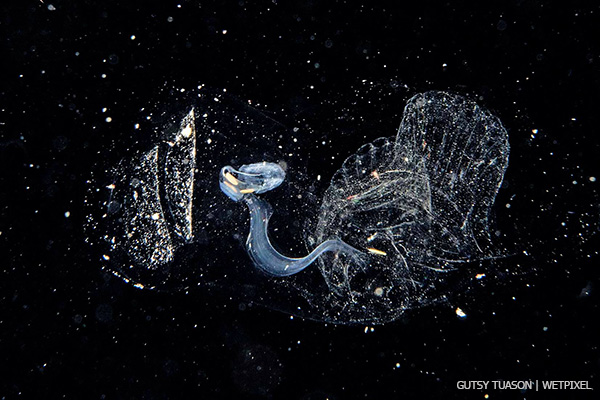 Scott “Gutsy” Tuason captured this amazing image of a larvacean during a black water dive in the Maricaban Strait, Batangas, Philippines at 10 meters of depth.

From the Plankton Chronicles:

Larvaceans produce and live in a bubble-like house that doubles as fishing net. They secrete cellulose and protein fibers that form complex feeding filters. Fiercely beating its tail, the larvacean tadpole catches and sucks in algae, bacteria and protists.

Several times a day, the larvacean abandons the old house clogged by food particles. It secretes and then inflates a new one using its tail, a forerunner of the spine which characterizes all vertebrate animals.

Larvaceans are short-lived: just a few days of frantic activity, enough time to produce gametes that look like shiny helmets on their heads.

Larvacean houses and their contents constitute a large part of what we callmarine snow, organic matter constantly drifting down from the surface. The discarded houses sediment on the sea floor, carrying atmospheric carbon from the larvacean’s diet of phytoplankton.

Short-lived, rapid developers, larvaceans can proliferate and form dense clouds when food is abundant. They live in oceans all over the world, an essential link in the marine food chain.