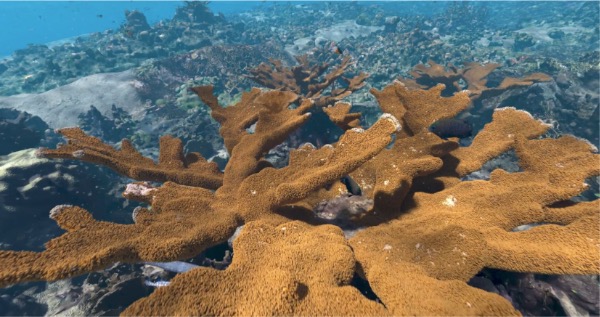 bioGraphic has posted an excellent infographic called “Inside Coral Bleaching”. The graphic was rendered from a 3D model that consisted of over 20,000 images captured primarily by scientists from the 100 Islands Challenge Team. The photogrammmetry was created using Agisoft Photoscan, Blender and Cycles with animations of fish and the coral polyps expelling their zooxanthellae algae added in post.

The infographic highlights the process, science and effects of coral bleaching.

“With the help of new tools, including high-powered underwater microscopes and photogrammetry equipment, scientists are gaining unprecedented insights into a process that is changing both the face and function of our planet’s coral reefs: coral bleaching. These new glimpses into an animal’s powerful physiological response to stress are both surprisingly beautiful and unsurprisingly sobering. When corals are under duress, they expel their resident algae—tenants that provide the animals with both their color and up to 90 percent of their energy. Without their in-house food source, the corals slowly begin to starve. This reaction has been occurring for millennia in response to a wide range of stressors such as fluctuating water temperatures and sedimentation. Until recently, however, coral bleaching happened only in a localized, ephemeral way.”