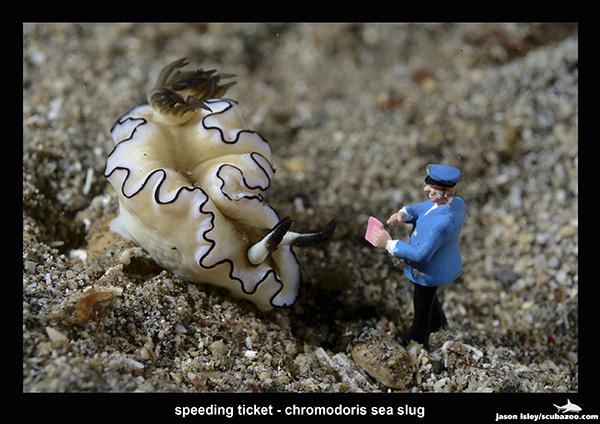 Jason Isley is co-founder of Malaysian-based, independent production company Scubazoo. He has filmed and photographed extensively all over the world including overseeing the underwater logistics and filming for the two UK Survivor series and the Disney IMAX production Sacred Planet. He also filmed on programs like Journeys of a Lifetime, Animal Planet’s The Jeff Corwin Experience, Nick Baker’s Weird Creatures and Perfect Predators for Discovery Channel’s shark week.

More recently, he has chosen to focus on his passion for underwater photography full-time, and has been featured in Scubazoo’s coffee table books Sipadan-Mabul-Kapalai, Sabah’s Underwater Treasure, reef and Maldives-The Underwater Kingdom. Jason’s photographs and articles have been published in magazines and books around the world and his images have won several international awards.

In a departure from traditional underwater photography, Jason has been creating macro images using toy figures “interacting” with underwater scenery and marine life. Jason’s work is being featured in Wetpixel’s new Full Frame; Adam Hanlon caught up with him and asked about his innovative images.

When not in the water, Jason is Scubazoo’s Managing Director, and after work, is often found on the football field or in the garden tending his prized orchids.

Adam: Hi Jason, I guess that the obvious question is; why miniatures?

Jason: I was completely bored with macro photography, most people are, which is why snoots and diopters are used – to spice up the macro. I was looking for something completely different, something that would create a response. I came across the work of Christopher Boffoli and Slinkachu who had both used miniatures in still-life sets and suddenly thought ‘what if you actually shot them with living creatures?’

Adam: What inspired you to shoot these scenes?

Jason: The work of Slinkachu was the main inspiration as he created installations on the street, I knew I could do similar sets but with living macro subjects like scorpionfish and mantis shrimp. Once I got the initial idea in my head the images and possible subjects started flooding my brain and that was without partaking in any illegal chemicals!

Adam: Apart from the humor, the shots are obviously carefully crafted. How do you script the shots?

Jason: The first shots were taken on my doorstep – Tunku Abdul Rahman Marine Park opposite Kota Kinabalu, I knew the beach dive at P.Sapi had various creatures like the snake eel and the devil scorpionfish so I planned the scenes around the subjects available. The first miniatures I bought were the soldiers so I concentrated on creating those scenes. I normally sketch the image I have planned so the guide or assistant knows exactly what I have in mind and also to remind myself. 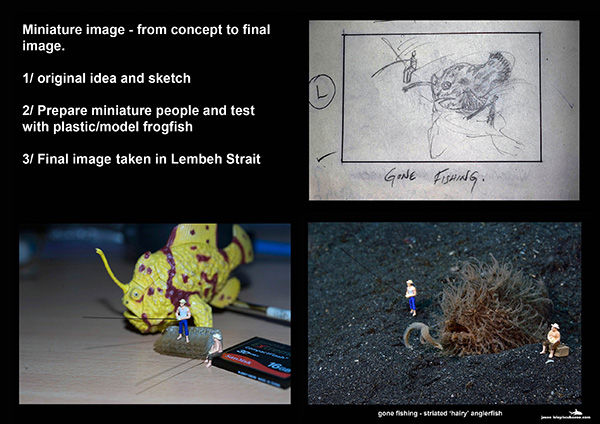 Adam: How long does it take to set up and shoot a scene?

Jason: Depends on the scene, some of them have taken as little as 15 minutes to set up and shoot, however others like the little girls watering the xmas tree worms took two dives, each over an hour-long. I didn’t want to damage the coral so I found a small part of the brain coral close to the worms that had algae growing and placed her there, however the current kept taking her away whilst I was waiting for the worms to come back out.

If the subject is super shy I usually set up the miniatures and go off to shoot something else. The only problem is that the fish sometimes swim off with the miniatures.

Adam: Do you use any special or modified equipment?

Jason: I have shot all the images with 60mm macro on D800 but I have some larger scenes planned where I will probably use a wider lens. I also want to bring in some larger creatures, turtles etc so a fisheye/teleconvertor set-up will probably be used. I also use just one strobe sometimes to create a stronger shadow.

Adam: Where do the figures come from and do you make and paint them yourself? How many do you own?

Jason: Most of my figures are from Preiser, they are used on model railways, I have bought some online however I now know the exact locations of all hobby shops in Singapore, Kuala Lumpur and Tokyo,!

I did buy some soldiers, paint and special brushes but I soon realized my eyes are not good enough for that at 42! 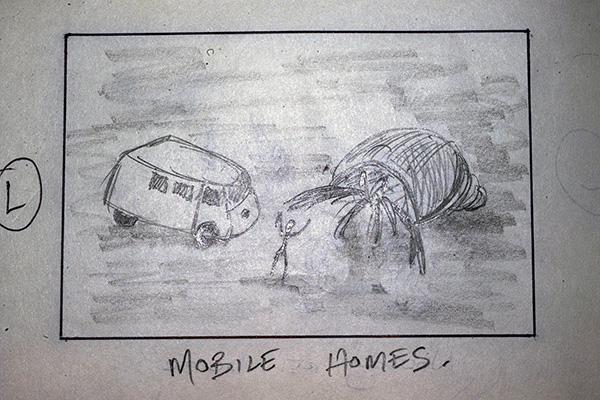 Adam: The “interactions” between the figures and the creatures is obviously carefully crafted. Do you know the locations of suitable animals and go to shoot a scene with that animal, or is it more ad hoc?

Jason: Nothing is ad hoc with these images, I actually got very stripy with the guide recently in Lembeh because he couldn’t find a nudibranch – I hate nudi’s and rarely take pics of them these days so it was quite a strange situation. I plan the image around the subject I know I will encounter, buy the miniatures, sketch the image planned and then dive the site specifically for that shot in mind.

Adam: Some of these must be very difficult to set up. How do you cope with current and surge? Have you had shoots disturbed by fish or other creatures coming to “take a look?”

Jason: The shot of the woman with the lawnmower was the perfect example, I actually had a nice image in mind where she was helping to trim his algae garden but he took an instant dislike to her and swam off with her in his mouth!

Adam: I would guess that local knowledge is important with these images. Where have you shot most of them?

Jason: The first batch were shot here in Sabah at the local marine park – Tunku Abdul Rahman Marine Park, but they have also been shot in Mabul, Manado and Lembeh. The shots in Mabul were done all in one day from the Scubajunkie jetty, being able to return to the same spot once you have found the creature in mind is the most important thing. Once I found the tube worm I knew it would work for the sunbathers.

Adam: I guess that there will be some that assume that these images are a clever use of Photoshop. How much post-processing do you do?

Jason: I have had a few comments regarding this but they were all taken underwater, my photoshop skills are actually terrible so they have only had contrast and unsharp mask. The one exception is the stargazer shot which has had the stars added in the top of the shot, against my original plan and wishes.

Adam: You are well-known for having captured the humpback whales’ heat run in Tonga for the BBC Life series. It would seem that you do not want to be typecast! Does the capturing of macro scenes with toy figures strike you as being a vaguely ridiculous activity by comparison?

Jason: Haha, maybe, I think the photography side of our business is constantly in need of fresh ideas and making money is becoming more difficult day by day. I have a plan to make a small book with these images and that will make them commercial, pygmy seahorses and nudibranchs don’t make money so it’s a constant battle to compete in the image market and that is also one of the reasons I created these images.

Adam: It seems that eccentric images are often very popular with the general public. A portfolio of your miniature images was published in the Daily Mail recently. What has the response been like to these?

Jason: It has been amazing, I posted the first series in 2012 and Scuba Diver AA published an article (all the others were scared of negative comments), the online response was massive and now the second series has featured in Daily Mail, telegraph and also the Discovery website. I have had more views and comments to these than any of my previous images.

Adam: It is certainly obvious that the images capture animals in a different way. Do you think that this can educate people about creatures, or does they only entertain?

Jason: One of the reasons to start shooting these images was also to educate, the tunnel maintenance image explains exactly what the shrimp is doing. They are aimed at the general public rather than just divers and I’m hoping the humor will get people hooked.

Adam: Can you see these images being able to be used to convey a message about environmental issues for example? Do you have any plans to do this?

Jason: I have various environmental images planned so the book will feature these as a separate chapter and hopefully that will reach the masses, divers generally don’t need educating but the general public do.

If I can get people liking the images so they want to buy a book I can then slip in the environmental message which is the main thing.

Adam: If someone is planning to emulate your images, what advice would you offer?

Jason: Expect lots of frustration, when I was a kid toys were much cheaper and be prepared to get only one image per dive. And remember there is a thing line between emulating and copying!