Didier Noirot, aka “Ze Jokar,” is an award-winning underwater cinematographer based in France. His impressive resumé includes working on the BBC/Discovery epic series Planet Earth and Blue Planet as well as being the principal cameraman for the ‘padrino’ of underwater films, Jacques Cousteau, from 1988 until Cousteau’s death in 1997. Ze Jokar was recently in South Africa, where Wetpixel’s Drew Wong finished the interview that began in San Diego:

Wetpixel: Monsieur, have a seat.
Didier: No, no monsieur, please sit down.
WP: Before we start, can you tell us why you are called “Ze Jokar”?
DN: I cannot really say, I believe it originated in Africa, with the sardine run. I can’t remember why.
WP: Or maybe you don’t want to remember?
DN: Yes something like that.
WP: Ok then so to start at the beginning, when did you start diving? And why?
DN: It was 1976… I was walking along the Seine, waiting for my girlfriend (yes it is cliché but it’s more cliché if I were walking with my girlfriend along the Seine) and I saw a poster advertising “plongée” and I was inspired. I went and bought the whole outfit, including a j-valve tank and mask. My first dive was in a quarry outside Paris. I am CMAS qualified.
WP: I’m sorry to hear that. Of course you must’ve had a camera?
DN: But of course, it was an Ikelite for the Canon FTB SLR. In fact this was my camera for the next 10 years, including when I taught underwater photography at Club Med (from 84-86).
WP: Oh come on, the Club with no locks on the doors to all the rooms and you only taught underwater photography?
DN: Ok I also did video… VHS-C Imasub housing for a JVC camera. I was doing videos for customers. Then I sent my 15min tape and 40 slides to Cousteau and I was invited to join the Calypso as the still cameraman. 2 years later, I became the principal underwater cameraman.
WP: From stills to 16mm in 2 years? 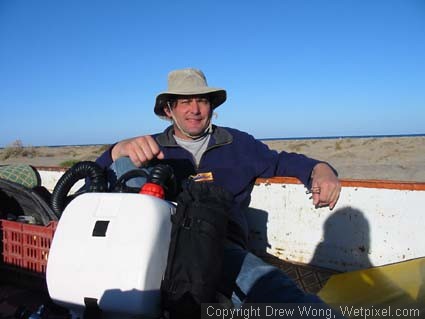 On a boat on land with a Draegar rebreather

DN: My first time was very interesting.  The old man (Cousteau) asked me to take the Honeywell camera down to shoot some scenes. I told him I had no idea what to do with it. There was no viewfinder or light meter or anything like that. The old man said put it at f5.6 and shoot it like a machine gun, the post guys will do the rest. I was very unsure but you don’t say no to the old man, so I went down, shot a reel and came back. 2 days later, Cousteau saw the reel and made me cameraman.
WP: What happened to the original cameraman? Did you throw him overboard?
DN: Yes, and back then there were still sharks in many parts of the sea, so it was quick… No really, he left to do a bigger project for Cousteau, so I took over. The moral of the story is that to be an underwater cameraman (stills or otherwise) you must have the eye and movement. The technical knowledge can be learnt and will come.
WP: Then for 9 years, you were on the Calypso and Alcyone, traveling around the world.
DN: Yes, we went many places. Asia, Africa, the poles… anywhere that was new and exciting. 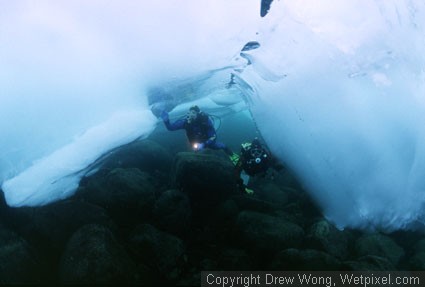 Under the ice in Lake Baikal

WP: I remember you told me about Lake Baikal. Have you become a specialist on these sort of locations?
DN: Of course it helps the production if someone knows the area and how to shoot it. We even came to South Africa for the sardine run.
WP: What happened after Cousteau died?
DN: I went freelance and fortunately met a producer for the BBC.
WP: So you were lucky to find the producer?
DN: Yes, it pays to know the right people too, even if you have the skills.
WP: You used DigiBeta, DVCAM and film in the “early” years. A lot of the stuff on Blue Planet was shot in DV?
DN: Yes, I have the PD150 and the VX1000 and yes quite a bit was DV.
WP: Now you use a Cinealta F750, F900 and 35mm?
DN: Yes, well I am not a jokar!
WP: Do you do everything yourself now?
DN: No, no, we have HD engineers who work on camera settings like gamma curves and keep the cameras working and also 35mm film engineers who work the camera and housing. I just shoot and look pretty.
WP: I’ve met your HD engineer on this shoot, and she’s a lot prettier than you.
DN: Yes that’s not hard.
WP: I also remember you were shooting your own program (with John Jackson) called “La Bête du Natal” in South Africa. Was it difficult to be director and cinematographer?
DN: Yes it was very difficult. Suddenly you have to worry about so many more things like actresses, locations, budget etc. It was very difficult. But we managed to work it all out in the end.
WP: I remember there was one scene where there was the diver with over 100 common dolphins in the background. That was an amazing shot.
DN: Yes we were lucky to find good visibility and the dolphins were also there. It’s nature and many times it doesn’t do what you want, so you have to learn to do with what you get… and sometimes it works very well.
WP: In terms of difficulty, which location shoot stands out in your mind? 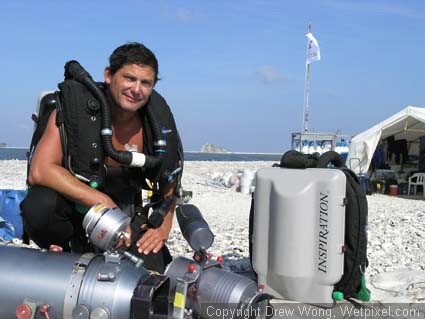 Didier on Clipperton Island with his Inspiration and housing by Subspace.

DN: By far it was the humpbacks in Tahiti. As you know, I was using the Inspiration rebreather to get close to the animals without scaring them. And with the rebreather, your mobility is limited and there are many things to remember to do and not to do. Plus the mother and calf humpbacks don’t stay still. So you have to follow them up and down and around. It was very difficult. In fact, the most difficult shoot I’ve ever had.
WP: What about your favorite dive?
DN: The same dives. Super clear viz with many humpbacks. It was magical.
WP: Your favorite destination?
DN: Cocos. It’s consistent, big stuff all the time. A great place to dive.
WP: Now for a person trying to be the next Didier Noirot, what would you tell him?
DN: For a person starting out, I would suggest he go with HDV, travel as much as he can and get all the stock footage. HDV is great for the beginning cameraman. Very important also to learn to move well underwater.
WP: Be one with the camera? Any camera handling tips?
DN: Yes, your technique is critical. The housing must be just negative neutral and balanced. It should stay in the position you point it and be able to push it with your fingers while staying stable. Balance is important. Same for the diver. There is no way to get stable image with a bouncing diver.
WP: What about framing and composing a shot?
DN: If you are shooting big fish, it’s really like shooting from the hips. Having a monitor to get the framing is important but it’s also important to keep your eyes open. You never know when something is coming from out of frame which could make things interesting. Keep a clear sharp mind and compose.
WP: What about white balancing?
DN: Monsieur, I don’t shoot goldfish in a bowl. There are all sorts of depth changes and distance changes. Just keep it at one setting and let the post guys handle it.
WP: Not a big macro fan?
DN: Not at all!
WP: Do you ever dive without a camera?
DN: Never. In this profession, you cannot be without a camera underwater.
WP: Any other advice for our reader (maybe readers) out there?
DN: Yes, it takes a lot of hard work and luck to get good. Keep an open mind and watch and learn from others. And of course, go to wetpixel for excellent advice!
WP:  Thank you…hey wait! You’re not even a member of Wetpixel!
DN:  You’re right, of course. I travel too much to be on the internet. You can act as my agent for Wetpixel.
WP: Monsieur, you are definitely a jokar! Thanks for doing this interview and also for dinner.

Didier is currently traveling around the world shooting another epic film by Jacques Perrin (producer & director of the Oscar winner, Le Peuple Migrateur (The Winged Migration)) called Océans, due out in 2009. For more information, visit Didier’s website at www.didiernoirot.net.