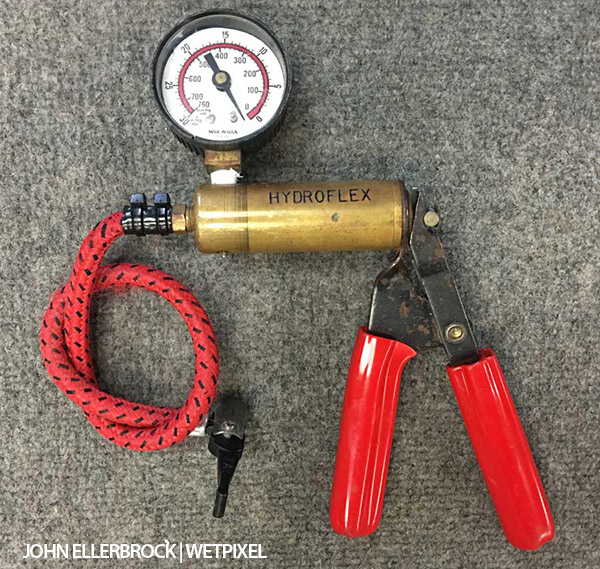 Gates Underwater Product’s John Ellerbrock provides a brief history of vacuum seal checking devices. Now consider de rigueur on most new housing purchases, it is interesting to note that the recent surge in their popularity has suggested that they are a new idea. John points out that filmmakers have been vacuum checking their housings for at least 70 years:

Our industry has a fascinating history. Vacuum checkers, for example. I’ve been digging into this for some time trying to identify the idea originators. So far the trail goes back to the mid-90’s IMAX Mark II camera housings used by Bob Cranston and Howard Hall. Al Giddings vacuum checked his film housings before that in the 80’s but he was not, apparently, the creator.

While sorting through Bob’s equipment recently (and he literally had a barn full of equipment) I found this little treasure. Clearly a hand pump vacuum checker, it is stamped ‘HYDROFLEX’. So I texted Pete the photo and got an immediate response: ‘Wow! Vintage HF!’. Early 1990’s, he said. And of course it uses a simple Schrader valve (same as bike tires) – the technology handy at the time.

Pete went on to say that Lamar Boren and Jordy Klein Sr. were vacuum checking 30 years before that! (Lamar and Jordy are famous pioneers – 007, Creature from the Black Lagoon, Seahunt and many others). Holy mackerel. I would never have guessed the history of Seal Check goes all the way to the 1960’s. Amazing.

“There are very few new ideas. Just a lot of unread history.”