Daniel Keller is the understated engineer who runs Keldan, a small Swiss company dedicated to producing high-quality underwater lights. I have always had a great respect for Keldan and its products because Keller is not afraid to show detailed test results from the exhaustive measurements he conducts in his lab. Keller is clearly proud of his top-of-the-line video light, the Luna 8 LA-V, which was shown at DEMA Show in 2009 and features a bright LED light source with a measured color rendering index (CRI) of 95 (Ra) – impressive, because LED efficiency tends to go down as CRI goes up.

Tim Lau of Nocturnal Lights, the official North and South American distributor for Keldan lights, offered to send me a couple Keldan Luna 8 LA-V lights for a review. I jumped at the chance. 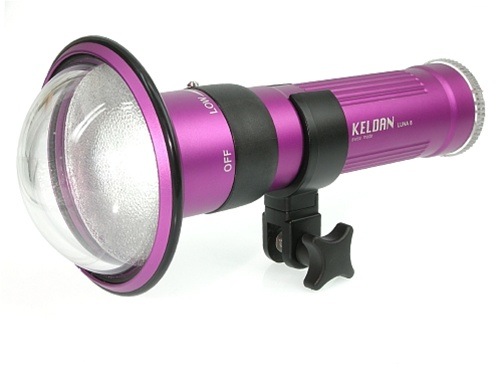 The Keldan Luna 8 LA-V is a self-contained light, featuring an exposed polycarbonate dome port on the front, a 40-watt LED, internal diffusers, and a removable battery. The battery features an eight-level charge display that is visible through a clear rear plastic cap.

The Luna 8 LA-V has 5 output levels between 10 watts and 40 watts, with a claimed burn time of 80 minutes at 40 watts and 320 minutes at 10 watts. I didn’t do exhaustive battery tests, but found that my battery was about half full after a 60-minute night dive with the light set to full power most of the time. The chargers seem to be pretty standard: huge AC adapters with interchangeable plugs for AC in different countries. I think the industry needs to completely revamp chargers for lights. Because of their standard bulky design, two typical chargers for underwater lights will fill up an entire power strip. Why not include a small whip/extension that connects to the AC adapter box to minimize plug space?

At DEMA last year, Keller gave me measured CRI and power output charts – again, extremely refreshing for a lighting company. The proprietary 40-watt, 5000K LED produces 3100 lumens at the bulb, which translates to 2100 measured lumens. The internal diffusers and dome port work together to produce even light with a coverage of 90 degrees. It would be worth using a third-party testing facility to verify power and CRI claims, but until then, I am more likely to believe the claimed numbers because Keller seems to be so careful about measurements and precision.

The Luna 8 LA-V weighs 2.5 lbs on land and 0.31 lbs underwater. It feels solid and well made, but is not overly heavy, which is important these days because travel is becoming so much of a hassle. The light is rated to 200 meters (656 feet) – far deeper than any human will probably ever go unless they are deceased or in a submarine. A magnetic switch with a lock turns the light on and off, and successive clicks mark each of the 5 output levels. A test mode shows the battery charge level on the back without turning the light on, although it does produce a quick burst of light when switched from TEST to OFF. One interesting note is that the light features full thermal protection and can be used on land as well as underwater without fear of damage. 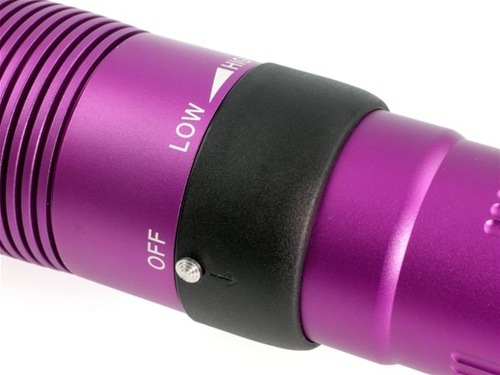 It’s easy to install and remove battery packs. Unscrewing the clear back cover provides access to the battery, which can easily be removed by grabbing the circular extension at its rear, which was presumably designed as a handling point. The battery features three holes that mate with male leads deep inside the light. At first glance, I assumed that it would be difficult to line up batteries during installation, but it turned out to be quite easy. Dropping the battery in and turning it while pushing gently resulted in a match and lock every time. 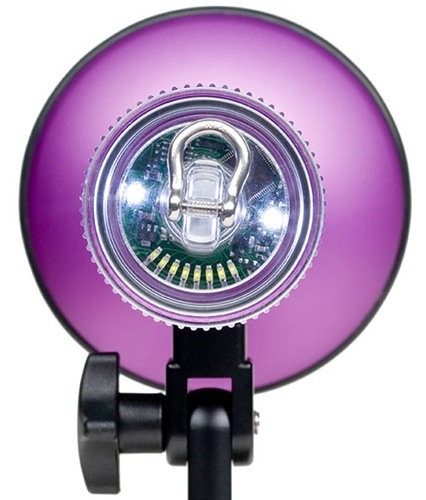 Rear cap is clear, providing a view of an 8-level battery level indicator

I took two Luna 8 LA-V LED video lights to the Maldives and used them to light up reefs and critters in low visibility. With 4200 lumens of light, no other divers in my group really even needed lights during night dives!

Subjectively, I remember the quality of light as being absolutely beautiful – the Keldan Luna LA-V LED video lights are smoothest, most even lights I have used. A gentle gradient at the edge of the beam transitions scenes from brilliant light to darkness, but it was so smooth that I can’t really call it an “edge.” There was absolutely nothing harsh about the light. 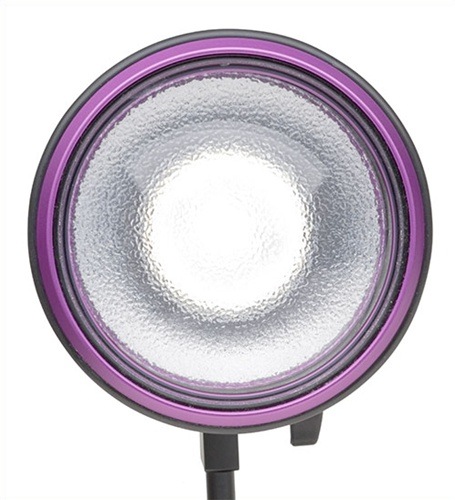 The diffused dome on the front of the Luna provides smooth, soft light

During the day, the lights simply added color to what was already lit (blue and cyan) by the sun. I’m not sure how to really describe it: the areas lit up by the lights weren’t necessarily any brighter than were other areas, but subjects suddenly came to colorful life when within reach of the beam. No portable, battery-powered video light is going to really be able to blast out enough light to compete with the sun during bright daylight, but the two Keldans made enough of a difference that I started leaving them mounted all the time.

Here is a short sample clip video clip from the one night dive I had with the Keldan lights:

Video: Eel action at night; Maaya Thila, North Ari, Maldives. Lit with a pair of Keldan Luna 8 LA-V lights. If you have 3D anaglyph glasses (red/cyan), you should check out the 3D version of the video clip.

Because the Keldan lights are battery integrated, they are obviously much larger than are video heads that are separated from their batteries. At times, I was worried that the exposed dome ports would be damaged – not by me or by subjects, but by boat crew during handoffs on the dive tender. Eventually, I ended up positioning the lights so the dome ports faced upwards during crew handoffs, which seemed to work well. No dome port cover is provided, and I think a snap-on cover would be a great accessory for Keldan to think about including to protect the exposed optical element. 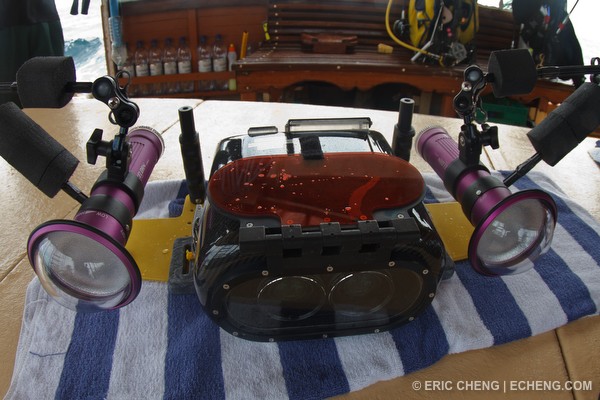 I loved my time with the Keldan lights. In fact, I’m sitting here at the Male airport in the Maldives and am already feeling sad at the prospect of sending them back to Nocturnal Lights. The Luna 8 is easy to charge; easy to use; produces bright, smooth, high-quality light; and burns for a long time on each charge. What’s not to like? Oh, yes – the price. At $1,996 USD per light, the Luna 8 is about the same price as a mid-level consumer video housing. Still, a few thousand dollars seems more reasonable when compared to the price of a high(er) end video rig, and cameramen who are working at a high level will definitely find these lights to be worth every penny. Start saving! 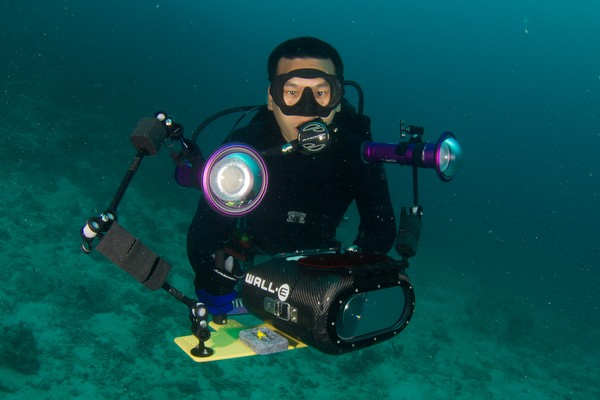