Underwater photographers dream of creating powerful shark images.  But doing so is no easy task.  Contrary to what the media would have us believe, sharks are not ever-present predators lurking beneath the surface waiting to catch unsuspecting humans.  As experienced divers know, not only is it difficult to get close to sharks, many divers go for years without seeing one at all.

If you are lucky enough to encounter sharks on your next diving adventure, here are some tips to help you capture stunning images. 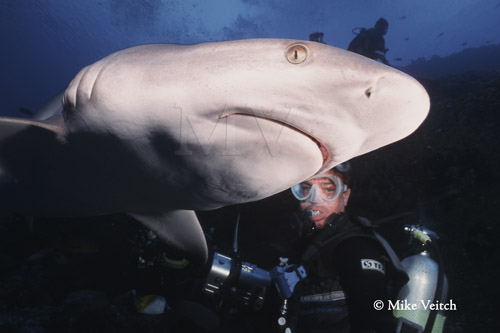 Different sharks require different lenses.  An 18 foot Great White attacking a baited tuna carcass mere inches from your cage requires a wide angle lens.  But what about the reef sharks encountered on an average dive in the tropical Pacific?  A full frame 15mm photo of a 5 foot grey reef shark 4 feet away makes the shark look like a minnow.  The large coverage of wide angle lenses creates a lot of “dead space” around the subject and detracts from the impact of a photo.

Medium angle (28mm, 35mm), zoom lenses (12-24mm, 18-35mm), or a good digital point and shoot can turn this same scenario into a winner.  The narrower angled view of these lenses cuts down the “dead space” around the shark.  In turn, the shark fills more of the frame resulting in a winning photo.

What makes sharks scary to the average citizen?  Cold eyes and sharp teeth!  Images showcasing these attributes are best achieved with a longer lens.  The 60mm (or similar) lens captures fantastic full frame portraits that really stand out.

We have all studied fish identification books; the images found in them are great for distinguishing shark species, but that is all they offer.  No offense to i.d. specialists, but these flat images are boring.  To capture a dramatic shark photo, you’ve got to concentrate on the business end of the shark: the head.  The best way of doing this is to utilize what I call the 30 degree rule.  This consists of the shark facing toward the camera at 30 degrees (or more) from parallel.  This enables the shooter to capture the all-important head of the shark as the key element of the photo whilst relegating the less important parts to the background.  Not only does this create a 3 dimensional look to the photo, it also creates personality.  Creating personality and a sense of interaction will set your image apart from the “i.d. photo” approach. 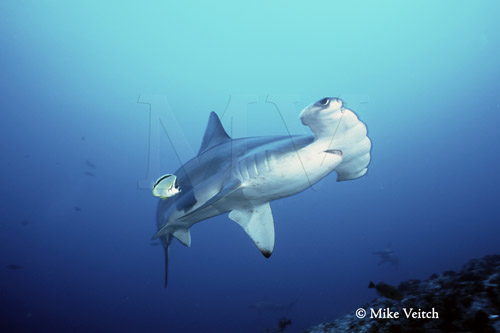 Like the shark itself, humans must use stealth and patience to capture their target.  On countless occasions, I have watched sharks turn tail and flee as an overly excited photographer races after it with “strobes a’blazin.”  More often than not, the photographer ends up with that much sought after tail photo…

Sharks are spooked by sudden bursts of motion.  Their instinctive reaction is to get away from the “noise” maker.  Therefore, the best approach is to remain calm, move slowly,  and avoid big clouds of bubbles.  A small steady stream of bubbles is less intrusive than the large explosion associated with holding your breath! 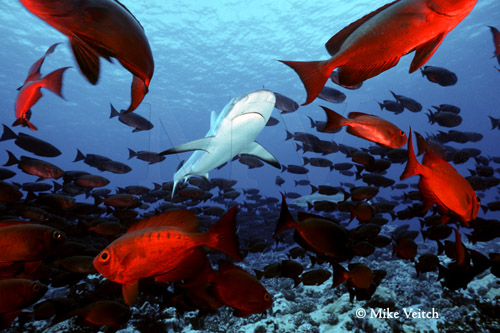 Certain areas of the world are blessed with large schools of fish;  Jacks and snappers in Palau, crescent tail big-eyes in French Polynesia, and the “Sardine Run” off the coast of Africa are a few examples.  Sharks are found cruising through these schooling fish waiting to pounce on the old, the sick, and the stupid.  These interactions of predator and prey make for great photo opportunities.  In some instances, schooling fish will actually surround a diver in the belief that this large presence offers some protection.  The smart photographer can use this to his/her advantage.  Being surrounded by fish camouflages the diver from the wary eye of a shark.  By remaining still, a photographer can shield himself from the shark until “Bang!”, off goes the camera.  The advantage of this technique is that the “dead space” of the photograph is now filled with fish.  An otherwise ordinary shark photograph is now a stunning image of predator/prey interaction.

When All Else Fails… 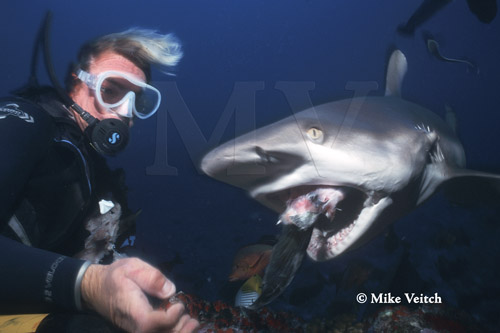 Shark feeding.  Sure, its’ controversial, but if you’re interested in getting the most from your shark photos, this is the way to go.  There’s no easier way to get close to sharks than to participate in a professionally (stress professionally) run feeding.  With bait in the water, sharks lose their wariness of divers.  In fact, sharks often brush up against divers on their way to the food.  Not only does this create opportunities for great close ups, it’s a great way to capture multiple sharks in one image.  Another bonus is the chance to catch shots of people interacting with sharks.  This make a great souvenir for your friends and it helps viewers distinguish the size of sharks.

Two set ups are used in reef shark feeding.  The first is the “chumsicle” approach; in this arrangement all divers kneel on the bottom as sharks feed upon a frozen pile of fish guts.  The second style involves a feeder with a bucket full of fish.  This approach is more controlled and better for photographers.  If you ask nicely, or hang around long enough, the “feeder” may allow you to set up beside him.  This is your chance for the ultimate shark photo.  There’s nothing like filling your frame with a mouthful of teeth!

Patience and imagination are keys to great shark photos, but you’ll never forget being there.  Some of my best shark memories are not captured on film at all.  Take time to observe these magnificent creatures in their natural habitat and record it in your “mind’s eye”.