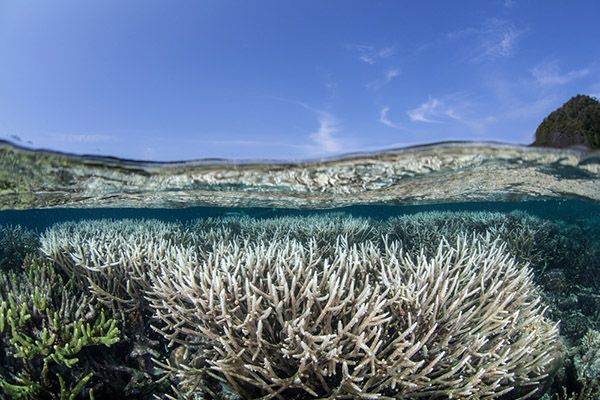 The National Oceanic and Atmospheric Administration (NOAA) has declared that the third global coral bleaching episode is now underway. The event began in the north Pacific in 2014, is expected to expose 95% of corals in the U.S.A. to bleaching conditions by the ned of 2015, with a similar effect on reefs globally. Bleaching is caused by sea temperatures rising, which NOAA states, is due to global warming. In addition, the strong El Ñino may have an additional effect in late 2015 and early 2016. (Image from [Shutterstock)(http://www.shutterstock.com/pic-208937023/stock-photo-shallow-corals-begin-to-bleach-in-eastern-indonesia-bleaching-is-usually-caused-by-sea-temperature.html?src=Lp66Amrj7pR7pKIIAnQnZg-1-3))