Trip Report Index: [Article - Shark Photos - Pig Photos - Misc. Photos]
Don’t miss the photo galleries! click on the links above to get to them. 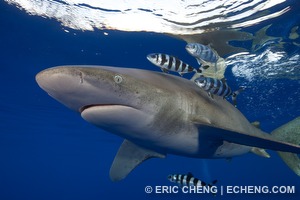 I’m told often by folks who have been on the ocean for decades that that oceanic white-tip sharks (Carcharhinus longimanus) were once one of the most common sharks in the ocean. In a classic scene in the movie, Blue Water, White Death, Peter Gimbel, Stan Waterman, and Ron and Valerie Taylor swim in open water with hundreds of oceanic white-tip sharks, who are all feeding on a whale carcass.  These days, oceanic white-tips are consistently found only in a few places in the world, and divers are lucky if they encounter even a few individuals at once. I had dinner with shark scientist Samuel “Doc” Gruber in Miami while I was in the area, and he was overjoyed to see photos of oceanic white-tip sharks taken so recently. He told me that decades ago, they were “everywhere,” but that it had been many years since he had seen one alive. 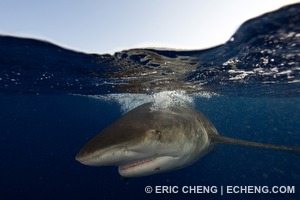 The Bahamian oceanic white tip shark population is still somewhat of a mystery; no one really knows when they are in the area, nor where they go when they are not there. In an exploratory trip with Brian Skerry and National Geographic, Jim Abernethy found oceanic white-tip sharks in the Bahamas three years ago after hearing reports from fishermen. Two years ago, I went on a successful exploratory trip in June to photograph the sharks.  In 2007, JASA had an epic trip in May, in which divers swam around for days with more than 20 oceanic white-tip sharks at once—an encounter that seems impossible to those of us who are in search of such experiences! Two months later, a Wetpixel expedition made the 32-hour crossing, hoping for a similar encounter, but there were no sharks to be found. The water temperature was abnormally warm (84°F+), and it seemed as if the ocean was completely dead. We didn’t even see a single game fish in the water, a fact that may have been tied to the absence of sharks. 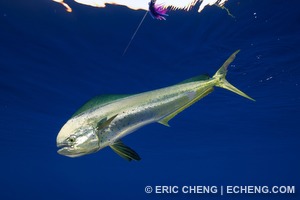 Still, JASA had managed to arrange successful shark encounters in May for three years in a row, so in 2007, I booked a May expedition date for 2008 to maximize the chance of a good encounter. On the morning of Friday, May 9th, eight of us boarded the M/V Shear Water and began the crossing to Cat Island. The next 32 hours passed by in a sort of haze; everyone seemed to be passed out in their bunks, and there was almost never more than one person in the salon at a time. The only person who seemed to be awake during normal hours was Stella, who sat in the corner and worked diligently on translation assignments (so I hear—I was one of the ones who only emerged late at night).

Crossing conditions were really good, and I couldn’t believe how calm the water was. The ocean was a mirror, pulsing slowly up and down with only the slightest motion. We pulled up close to Cat Island in the late afternoon on the 30th, and a few minutes later, the back deck erupted into frantic activity. 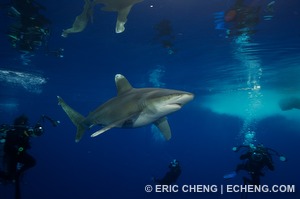 Everyone threw on their gear and launched themselves off the back of the boat. At the stern were three oceanic white-tip sharks (all female). One of the sharks had four pilotfish around her, but the others were unfortunately barren. I spent a lot of time shooting a female dolphinfish (mahi) that we had hooked just beforel; even though oceanic white-tip sharks are rare, I had never before had a bright, flashing mahi in front of me in the water.

We spent the next three days diving with oceanic white-tip sharks. A few of the sharks were really large, and one was so girthy that it looked like her front half was a bull shark. She had some jaw damage (presumably from a hook) that gave her a sinister sneer, and had a suitably-fearless demeanor to go along with it all. Actually, almost all of the oceanic white-tip sharks lived up to their reputation, investigating individual divers one at a time without any fear at all. They are one of the easiest sharks in the water to photograph; divers just float around in the water and wait for the sharks to approach.

On Thursday, May 15, we anchored just off of the beach at Big Major (which I predict will become known as “Pig Beach,” shortly). During last year’s expedition, we spent a day with the pigs here, which almost made the failed trip worth going on. Actually, the prospect of a pig encounter was apparently so exciting that two of this year’s guests signed on for pigs—not sharks! 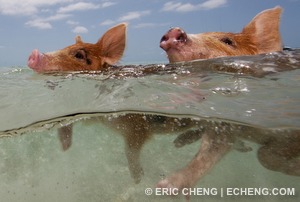 Three large, white/pink sows greeted us with much fanfare as we pulled up to the beach. The local yachties have been feeding these pigs so regularly that they pretty much run out to greet every vessel that arrives. This year, we were presented with an unexpected bonus: piglets! Four piglets rooted around all the gear that we deposited onto the beach, occasionally squealing to mommy for a drink of milk. Two of the piglets were pink, and two were spotted brown, very much like the big male that we saw last year (the big male that Jim kept calling a female, despite the huge cajones hanging off of the tail end).

Despite being on a shark expedition, I have to say that a day of pigs on the beach might be more fun than any day of sharking! There is nothing quite like being nearly trampled by a hundred-pound pig in two feet of salt water. We all finished the day with huge smiles on our faces.

We did a full day of travel back to the northern Bahamas followed by a day of diving at the End of the Map. It was the first time the Shear Water returned to that location since the accident—a good thing, I think. A few of us floated up above the site as we first entered the water, reflecting…

No sharks arrived, but we did get to hang out with a large, friendly hawksbill turtle and about a billion lionfish. I never thought I’d think of lionfishes as pests, but that’s certainly how I see them when I am in the Atlantic.

After failing to find oceanic white-tip sharks on last year’s expedition, it was a huge relief and pleasure to find them this year. Everyone seemed to have a great time on board, and even the long travel time to and from Cat Island didn’t seem so bad. I am excited for another trip in the future! 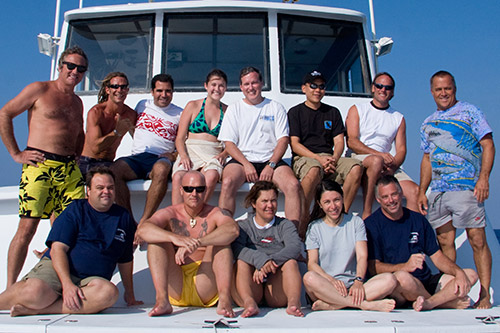 For more information on shark and dolphin expeditions in the Bahamas, visit Jim Abernethy’s Scuba Adventures or contact us here at Wetpixel.

Don’t miss the photo galleries! click on the links below to get to them.
Trip Report: [Article - Shark Photos - Pig Photos - Misc. Photos]