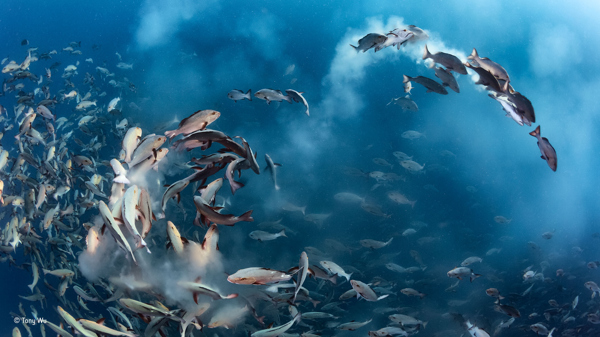 The results of the 2016 Wildlife Photographer of the Year (WPOTY) contest have been announced. Tony Wu took first place in the Under Water category, with an image of two spot snappers mass spawning in Palau. Other finalists in category include Geo Cloete, Joris van Alphen, Audun Rikardsen, Ralph Pace and Greg Lecoeur. Congratulations to them and all the finalists.

For several days each month (in tandem with the full moon), thousands of two‐spot red snappers gather to spawn around Palau in the western Pacific Ocean. The action is intense as the fish fill the water with sperm and eggs, and predators arrive to take advantage of the bounty. Having read about the drama, Tony couldn’t understand why there were so few photos of it – until he hit the water there for the first time, in 2012. The currents were unrelenting – ideal for eggs to be swept swiftly away but a struggle for him to keep up with the fast‐moving fish. Also, the light was low, and the water was clouded with sperm and eggs. That first attempt failed, but he has returned every year to try to capture the event. Noticing that the spawning ran ‘like a chain reaction up and down the mass of fish’, his success finally came when he positioned himself so that the action came to him. Rewarded with a grandstand view, he was intrigued to see that the fish rapidly changed colour during mating from their standard red to a multitude of hues and patterns. Even their characteristic two white spots, close to the dorsal fin on their back, seemed to fade and reappear. On this occasion, with perfect anticipation, he managed to capture a dynamic arc of spawning fish amid clouds of eggs in the oblique morning light. Still obsessed by the dynamics and magnitude of this natural wonder, he will be returning to Palau next April to witness once again the spectacular snapper party.

Though Geo had encountered large smacks of Cape box jellyfish before in the waters off South Africa’s Hout Bay, this time numbers were truly astonishing. Not only were there thousands of jellies but they were also tightly packed, forming several columns linked deeper down to a thick swarm. Few have seen such a spectacle and no one knows the reason for such behaviour, but it is probably linked to reproduction. Box jellies are sufficiently distinct from other jellyfish to warrant their own class (Cubozoa). They have four complex eyes, with which they can detect movement of prey and changes in light intensity, and they can actively propel themselves. Some species are also extremely toxic (barbed nematocysts – explosive cells – on the four tentacles of Cape box jellies, used for stunning prey, can inflict painful stings). Some have elaborate courtship and mating behaviours. When they reproduce sexually, the male puts his tentacles into the bell of the female and delivers packets of sperm. ‘I was captivated by the rhythmic contractions of their bells as they danced up a storm,’ says Geo. For once, the visibility in these plankton-rich cold waters was reasonable, and he was able to capture one of the spectacular columns of transparent jellies against the sunlight.

The strong summer winds blast straight into South Africa’s False Bay, making diving difficult, but Joris was committed to revealing the beauty of this seldom-seen boulder-reef community. False Bay is where two formidable currents meet, warm and cold swirling together to create a unique ecosystem. It once teemed with a diversity of fish, but populations have collapsed after years of overexploitation. Hottentot seabream are among the few fish that are still easy to find (many others take years to reach reproductive age making them very vulnerable to overfishing). ‘I really liked the shape and colour of the split-fan kelp,’ says Joris, setting the scene with sea bamboo reaching up behind, though in the strong surge, it was a struggle to keep the elements lined up. Eventually, a few seabream passed by to complete his composition, their silvery forms set off against the nutrient‐rich water.

Above the water, the stage is empty. Below, the show has begun. In February, just before leaving the bays in the fjords of northern Norway to migrate south to mate, male humpback whales begin to play and sing more intensely. From the surface, brief sightings of tail flukes and flippers and the thwack of tails and bodies hitting the surface signal what’s going on, but Audun wanted to capture the whole stage, including the interface between ocean and air. But he faced a considerable challenge: the low light at the end of the polar winter. Not only did he have to fashion his own underwater system for the split-level view, but he had to find a male that would stay with him in the water, with the right background above the surface. He also had to be in the water at the right moment and be close enough to the whale and in the right position without disturbing it. So the picture took a huge amount of planning and attempts to get the composition and mood right: peace above, playfulness below. It’s thought that the male whales are both serenading the females and communicating with each other ahead of the huge journey to southern latitudes and warmer waters, where they finally mate –a show worth marvelling at.

The struggle between California sea lion and ocean sunfish lasted almost an hour. ‘The fish would dive to escape,’ says Ralph, ‘then both would surface further away, thrashing madly.’ Ralph was in blue water off San Diego, California, in the hope of seeing just such an encounter. The 2015 extreme El Niño event (warming of sea‐surface temperatures in the central-east equatorial Pacific) had driven much of the sea lion’s more normal fish prey north to cooler water, leaving the sea lion to take whatever else it could. This young sunfish – the world’s heaviest bony fish, up to 4 metres (13 feet) long, with no tail or scales – had lost its pectoral fins, perhaps to a fishing net (many die in nets). Finally the sea lion penetrated its tough skin. ‘As they looked eye to eye,’ says Ralph, ‘the fish seemed almost to plead for its life.’

A baitball driven to the surface by common dolphins splits in further panic as Cape gannets plummet down. Wings folded back, they are so streamlined that they barely slow on hitting the water, shooting 10 metres (33 feet) deep before braking. Greg captured the moment one gannet seized a mouthful of fish, a fizzing trail of bubbles in its wake. In two weeks of searching, Greg encountered just two baitballs, one in poor visibility, and this small one, of red-eye round herring – not the sardines he was expecting. The annual ‘sardine run’, when millions of sardines move up South Africa’s east coast, is now less predictable, possibly due to overfishing or warming waters. For Cape gannets, which breed on just six small islands and are vulnerable to extinction, shortage of fish is now a major threat.

There is a full gallery of images from the contest on the Wildlife Photographer of the Year site.