Structured as an extended metaphor comparing the sea with a symphony, the magnificent Silent Symphony comprises four chapters—or, to keep with the conceit—four “movements”: Discovery, Fascination, Passion, and Epiphany. Truly, the conceit is genius: it clearly demonstrates how the sea, like a symphony, derives its beauty and meaning from the intricate relationship among all of its parts. Silent Symphony makes painfully obvious that, in the same way that one instrument can not play a symphony, one fish can not make an ecosystem. Ultimately, not only is Silent Symphony a dynamite photo essay showcasing the marine world, it’s also an important document explaining why ocean conservation is imperative.

When I first held my copy of Silent Symphony, I treated it with kid gloves, gingerly turning the pages, careful not to damage the binding. Looking through the book, I felt like someone was sharing with me a long-forgotten treasure. Each photo was a never-before-seen artifact. Each description, an insight into a faraway world. Like a brilliant, inspiring art exhibit, Silent Symphony will simultaneously delight you, educate you, and amaze you. Unlike most art exhibits, however, it will also make you laugh. 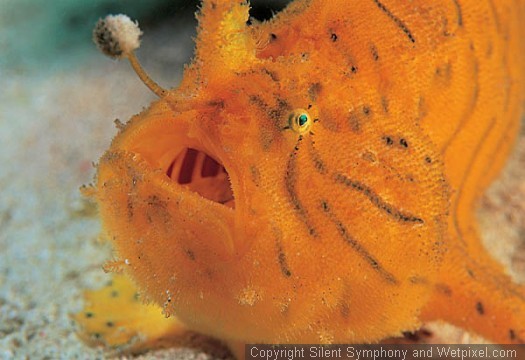 In the first movement, Discovery, Wu and Tan explain how they moved from landlubbers to divers, and they showcase some of the common marine life green divers are bound to encounter: Turtles, Cuttlefish—if they’re lucky, maybe some Emperor Shrimp. Although the images in Discovery feature animals a novice diver might see, the images themselves are not those that a novice diver might take. Brilliantly captured, vibrantly colored, and unfailingly crisp, these photos would delight any shooter. 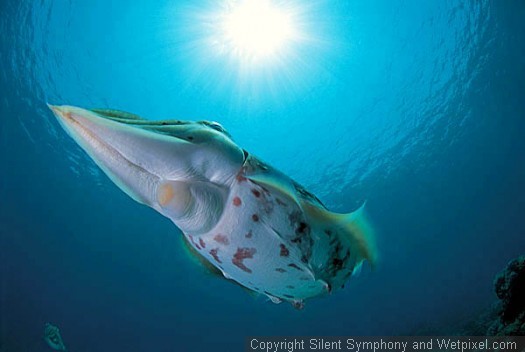 Throughout the book—from the macro shots of the Weedy Filefish’s delicate eyeballs to the wide-angle shots of schooling Yellow Sweepers—each image is given its own page with a caption to accompany it. While the images are utterly fantastic, one of the real treats of this book is that the short narratives are so well-written. Ranging from general descriptive behavior (“Rockcod can often be found in small groups or can be solitary and territorial…”) to the personal and humorous—like the tale of the moray eel that curiously inspects them in the Maldives; or the story of the male jawfish who put on his brave face to scare away the camera—Wu and Tan manage to give full, bold personalities to the creatures they meet. It’s not just fish they see; it’s a vibrant community filled with dynamic characters they encounter. 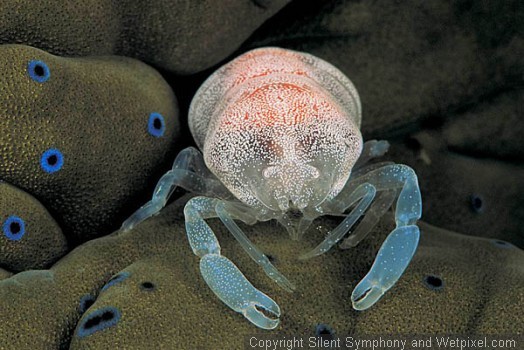 Movement 2, Fascination, explores the divers’ new-found respect for the ocean and their enthusiasm for it. Sensing there’s more to the marine world than the big animals that swim along the sea floor, the pair branches out in search of smaller, less visible animals. Along their travels, for example, they discover a Commensal Shrimp hiding in the folds of a Giant Clam. Unbelievably, they also find a Commensal Crab living inside the anus of a Sea Cucumber. Yes, this series of images is jaw-droppingly, forehead-wrinkingly amazing! Never before has an anus pictorial held so much fascination. Fascination goes beyond the superficial observations that can be made of fish; it delves deeply into the relationships underwater creatures share and how they work together to survive. This chapter also sports some luscious nudibranch shots, as well as some animals the casual diver might miss—Marbled Stargazers, Decorated Spider Crabs, Spiny Devilfish. The images—each and every one of them—are sumptuous.

In the third Movement, Passion, the diving duo casts their eyes to even more rarely observed animals. Straying further afield, the pair manages to capture images of unusual marine animals engaging in “real life.” For example, Passion showcases shots of Pistol Shrimp and Bubble Coral Shrimp filled to brimming with eggs; super-camouflaged Pygmy Seahorses and Gorgonian Shrimp hiding from predators; mating nudis, crabs, and Green Turtles; and feeding animals, like the Sargassumfish. Whereas you might have had the opportunity to see some of the animals featured in the first two Movements (well…except for that anus pictorial), in Passion, Wu and Tan really set themselves apart as first-class explorers and shooters. 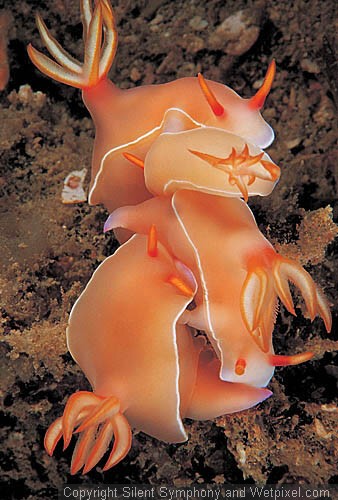 In Epiphany, the pair realizes they are slaves to the Symphony, wildly addicted to its rhythms, and desperate to get their fix of underwater creatures. They’ll go anywhere to dive for the shots they desire. The images in this Movement are astounding. For example, I fell in love with the photo of a beautifully-lit Mimic Octopus masquerading as a Crinoid, suspended like a giant marionette in the water. I was inspired by the image of a massive school of Pelagic Porcupinefish. I trembled at the incredible shots of the alien-looking Bobbit Worm feeding. And I gasped at the sublime sequence in which a Gold-spec Jawfish releases his juveniles into the current. You can almost see the joyful tears in his eyes as he does so.

Underwater photographers will consider this book a must-have for several reasons. First, the glorious images offer shooters “ideals” to aim for when creating their own shots. The images are so large, so bold, and so alive that it’s like looking at marine animals carefully laid out in a museum: I kept expecting a monocled Wu, delicate pointer in hand, to lean over my shoulder and shed additional light on the Mandarinfish’s mating rituals, for example, or the Jawfish’s (rather useless) tactics for scaring away curious divers. Second, the text describes the behavior of the various marine animals colorfully and vividly; readers will learn exactly what to expect from—and where to look for—the creatures showcased inside. Finally, Silent Symphony will help marine enthusiasts explain to their friends precisely why the ocean needs to be protected—not just by showing them pretty snapshots, but by proving to them how intricately interwoven the marine world is. 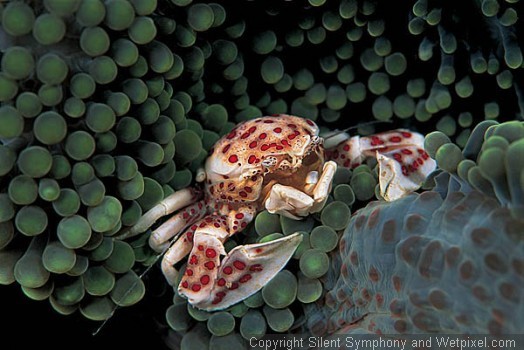 With Wu and Tan (and you) looking on, the marine orchestra demands that all its members play their best. Looking through these pages, you can virtually hear the orchestra come together, harmonize, and play its symphony to a crescendo. In Silent Symphony, not only do Wu and Tan share some amazing photos, they point out that everything in the oceans work as one, like instruments in a finely tuned orchestra. In the process, they convey an important environmental message—that everything in the ocean is interdependent and that, like an orchestra, removing any single player from the group would shatter an otherwise beautiful piece of music.

If you’re interested in picking up a copy of this mesmerizing book, .(JavaScript must be enabled to view this email address) directly. The books run a very reasonable $50 (plus shipping) per copy.