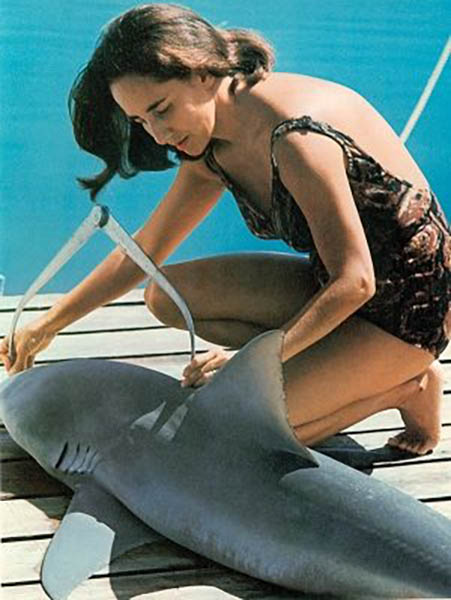 Dr. Eugenie Clark, explorer and scientist, has died at home in Sarasota, Florida, aged 92. Affectionately known as “The Shark Lady”, Dr. Clark was a pioneering marine biologist, diver and environmental campaigner. She grew up in New York but, inspired by visits to the Manhattan Battery Park’s Aquarium, studied zoology before going on to work in diverse marine research institutes. In 1955, she was founding director of the Mote Marine Laboratory in Florida.

She began diving with a hard hat in 1946, and had her first encounter with a shark in Palau in 1947. In 1968, she joined Jacques Cousteau on the Calypso for his epic global tour, taking in and filming as many ocean environments as was possible. During this trip, she carried out behavioral research into sharks, having been involved in the field with lemon sharks (Negaprion brevirostris) at the Mote Laboratory in the 1950s.

In one interview she summed up her interest in ocean ecosystems like this: “Those of us who love the sea wish everyone would be aware of the need to protect the sea”. She also said “I don’t get philosophical. Love fish. Love sharks. Keep the water and their habitats as clean and protected as possible”.

The Wetpixel community would like to send their thoughts and prayers to Dr Clark’s family and friends. The world has lost a true ocean spirit, and she will be both sorely missed and fondly remembered. RIP Eugenie Clark.