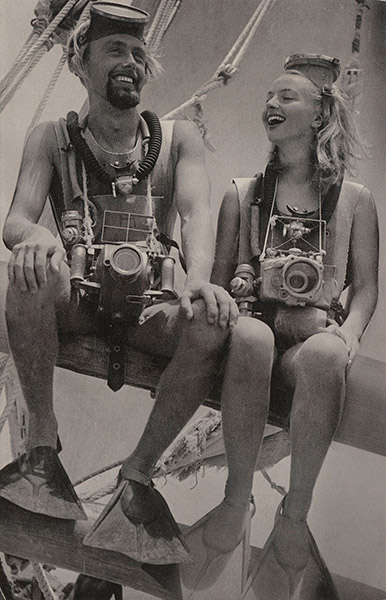 Pioneer of diving and underwater imaging, Lotte Hass, passed away on 14 January. Lotte overcame many stereotypes to become a very early underwater image maker, and was instrumental in bringing images of the underwater world to a worldwide audience in the 1950’s. Our thoughts and condolences go out to her family and friends.

From the Hans Hass Institute

In sadness we have to announce that Lotte Hass passed away at the age of 86 on Wednesday, 14th January 2015 after a happy and multi-faceted life.

By being the first woman to dive with autonomous diving equipment, Lotte Hass opened up a formerly male dominated field for the female world. Against strong opposition she first starred as underwater photo model before moving behind the camera to become an underwater photographer, subsequently opening up a whole new world for women and entering the history books of diving. Spectacular film scenes that showed her diving fearlessly with sharks certainly contributed to the big success of her husband Hans Hass’ movies in the 1950s. As fearless as she was underwater as charming and open-minded she was ashore. After having left the public limelight, she focused more than ever on being an advisor to her husband Hans Hass. Together they have been married happily for more than 62 years.

The importance of her extraordinary lifetime achievements has been highlighted once again by the ZDF/ORF screen adaption of her autobiography “A girl on the ocean floor” in 2011, in which Yvonne Catterfeld starred as Lotte.

We ask those who want to acknowledge the accomplishments of Lotte Hass as a diving pioneer, to support SHARKPROJECT, an organization that is dedicated to stop the destruction of the oceans and the extinction of sharks with a donation.

A book of condolences has been set up.

Michael Jung
Hans Hass Institute
On behalf of the Family