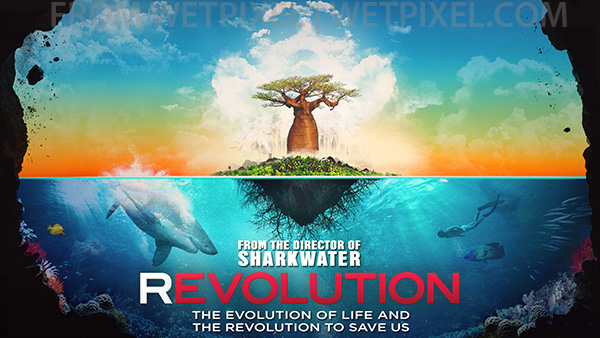 Revolution, “The Evolution of Life and the Revolution to Save Us”, directed by Rob Stewart of Sharkwater fame has been released and is now available to download. Featuring some stunning wildlife and underwater footage, the film charts Stewart’s journey charts what he describes as “the biggest movement in history” as he charts the growth of environmental awareness and activism worldwide.

A reel about the making of the film:

Revolution is a feature documentary about opening your eyes, changing the world and fighting for something. A true life adventure following director Rob Stewart in the follow up to his hit Sharkwater, Revolution is an epic adventure into the evolution of life on earth and the revolution to save us.

Discovering that there’s more in jeopardy than sharks, Stewart uncovers a grave secret threatening our own survival as a species, and embarks on a life-threatening adventure through 4 years and 15 countries into the greatest battle ever waged.

Bringing you some of the most incredible wildlife spectacles ever recorded, audiences are brought face to face with sharks and cuddly lemurs, into the microscopic world of the pygmy seahorse, and on the hunt with the deadly flamboyant cuttlefish. From the coral reefs in Papua New Guinea to the rain forests in Madagascar, Stewart reveals that our fate is tied to even the smallest of creatures.

Through it all, Stewart’s journey reveals a massive opportunity, as activists and individuals all over the world are winning the battle to save the ecosystems we depend on for survival. Presenting the most important information on human survival and inspiring people all over the world to fight for life, Revolution is essential viewing for everyone. Startling, beautiful, and provocative, Revolution inspires audiences across the globe to join the biggest movement in history that’s rising to the challenge of saving our world.