When Sea & Sea late last year announced that they where about to release a housing for the Canon EOS Digital Rebel XT/350D it came perfectly in time for me.  I had just decided that the EOS 350D was to be my first DSLR camera. 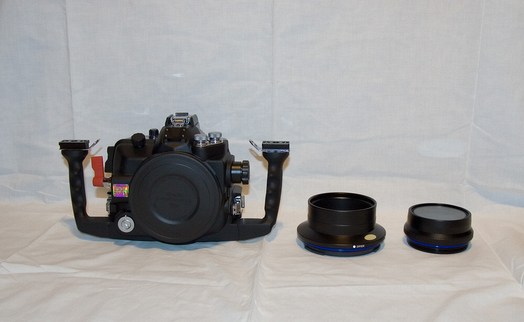 Before the launch I had been struggling which housing to choose for my new camera.  There where a few housing manufacturers offering solutions for my camera. Ikelite stood out as a good alternative offering both eTTL and powerful strobes. But I was a bit reluctant of boxing my new small and compact DSLR in basically the same housing as for the much bulkier 20D.

The Sea & Sea housing with its light weight and small outer measurements appealed to me so much so that I finally decided to go with it.  The price was a bit higher than the Ikelite housing but here in Sweden the difference was not enough to go with the cheaper alternative.

A few days ago the housing arrived and I was very pleased with the first impression. It looks and feels solid but yet compact and easy to handle, yet it was quite a bit bulkier than my previous Olympus PT-020 housing. 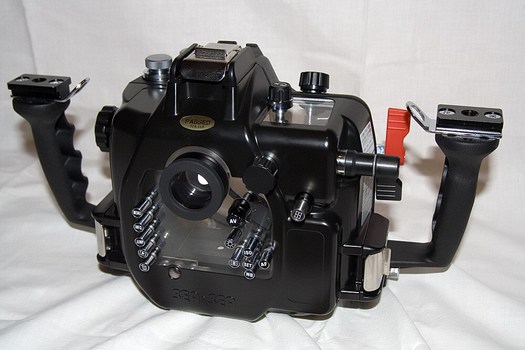 The housing is made out of two halves the front is made out of aluminum and the back from thick molded polycarbonate. It comes complete with dual Nikonos 5-pin strobe bulkheads as well as a built in water alarm. It is also prepared for the Sea & Sea shutter activated focus light. You can access every button except the flash popup button and the shooting mode button. 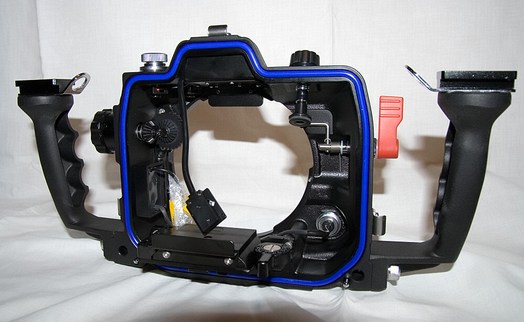 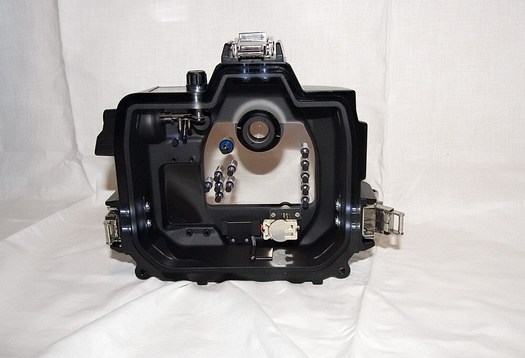 With no time to waste I was off to the community swimming pool for some underwater tests.

Equipped with the Canon EF-S 60mm macro I started testing and shooting every single object that I could find in the pool.

The first thing I noted was how easy it was to handle it underwater. The shutter was extremely smooth and it was very easy to feel when you had depressed the shutter release halfway down. The *button (AELock) was easily depressed simultaneously as the shutter. 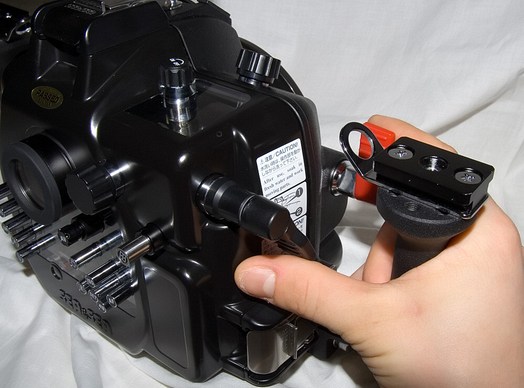 I have learned that the viewfinder on most APS-sized DSLR´s is a problem. I really have nothing to compare with here but I believe that it will work just fine.

I have a few complaints though:

My housing was during these first tests equipped with the NX- Compact Macro Port Base and The Compact Macro Port (S) and the first ting I noted was that the small and lightweight Canon 60mm lens didn’t really fill out the port. There was quite a distance from the front of the lens to the port glass. This left a lot of air in the port and it made the whole housing unstable. Every time I let go of the housing it tilted back towards me and ended up on the pool floor with the port pointing up towards the surface. This however is something I expect would not be the case with a larger and heavier lens.

The other thing that bothered me was the location of the jog dial knob. When shooting topside with the EOS 350D it is very easy to move the finger from the shutter release button to the jog dial. But underwater it is a whole different story. The jog dial turn knob is placed on the front aluminum halve and it was a bit tricky to reach, especially when shooting in Manual mode and having to simultaneously depress the AV button to be able to change the Aperture. 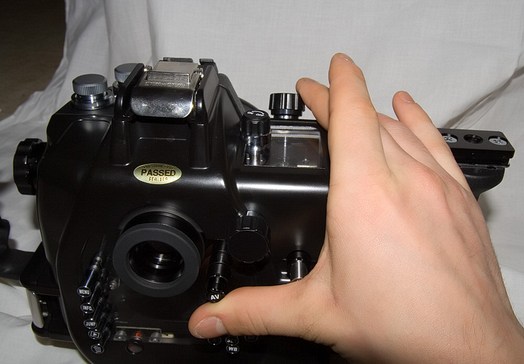 jog dial knob location can be difficult to reach

The last thing that I did not like on this housing was the fact that is was very hard to se which mode I was shooting in, perhaps this will show not to be a problem when I get more comfortable shooting with my DSLR.

Since this is my first DSLR housing I cannot make any comparisons with other housings. But I feel confident that this housing will work just fine once I get to master it better.

This compact and lightweight housing is very easy to use underwater and I do not believe that despite my initial impressions on the jog dial it would cause too much hassle in the future.

The unbalance issue with my macro lens bothered me but I guess it is easy to add little weight to the front of the port if I feel that it is necessary.

I can’t wait to get out in the ocean to do some real underwater shooting!