On Saturday, March 31, family members and friends of Larry Smith gathered to celebrate Larry’s life in a memorial service at SeaSpace 2007. All three of Larry’s sons - Casey, Tim and Trevor - were present, as was his mother, Evelyn, his sister, Joyce, and their families. Allan and Barbara Jones of Adventure H2O, Wetpixel members and contributors Gladys Howard, Burt Jones, Maurine Shimlock, Chip and Susan Scarlett, and Ken Knezick, as well as many of Larry’s family members and special friends shared stories about Larry - stories which were joyful, funny, heartwarming and moving, all of which spoke to the many meaningful ways Larry had influenced their lives. Larry’s mother summed up his life when she said, “Larry was one of a kind.  There will never be another like him.”

A collection of photographs from Wetpixel contributors was presented to each of Larry’s sons, his mother, and his sister. A copy for Dewi and Breezy was given to Casey, who will be married on Bali in October of this year and will deliver the photographs in person. Later that evening, Larry was honored at the SeaSpace Film Festival, where Burt Jones and Maurine Shimlock gave a moving eulogy, reproduced here in full:

Thanks Ken and the Seaspace board for giving us this time to say a few words about Larry Smith.  Its fitting that Seaspace is the stateside venue for Larry’s memorial because since its inception in 1969, Seaspace has promoted marine education, environmental awareness and the pure pleasure of sport diving.

And that’s what Larry Smith’s life was all about.  In the late ‘70’s back in Kilgore, Texas, Larry became one of the first instructors to teach scuba as a college credit course.  His dive shop promoted sport diving by sponsoring local film festivals.  Because of Larry lots of East Texas folks became enthusiastic certified divers.  He created his own coral reef ecology course in the late ‘80’s and taught 1000’s of divers from the Caymans to Indonesia to respect the marine environment. Working with the Negril Coral Reef Preservation Society, Larry installed mooring buoys in Jamaica and taught local dive operators how to preserve their very special reefs.

For the past 17 years Larry lived and worked in Indonesia exploring uncharted reefs and often discovering new species. He dived with the best - Stan Waterman, David Doubilet, the Deloaches, Paul Humann-and he always said he learned something valuable from every person who came on his boat. We believe it was more of a two-way street, and that Larry gave way more than he received.  His knowledge of marine animals and their habitats revolutionized the way we dive today. Because of Larry we all know about exotic marine animals and how to find them.  He could call in a school of jacks with a whistle or find a frogfish so camouflaged it was invisible to everyone else.

Publically Larry always said his biggest thrill was introducing beginning divers to the incredible world beneath the sea. But we know that he was extremely proud of his family-his sons, daughter, new grandbaby, sister, wife, and beloved mother.  Despite his long absences they were always first in his thoughts.

We do not foresee a day when Larry Smith won’t be in our thoughts.  The dive world has lost a pioneering teacher and marine environmentalist.  Still we know he’s up there in dive heaven teaching all the angels to hunt critters they never knew they had.  Selamat jalan, Larry.

Contributed by Chip and Susan Scarlett 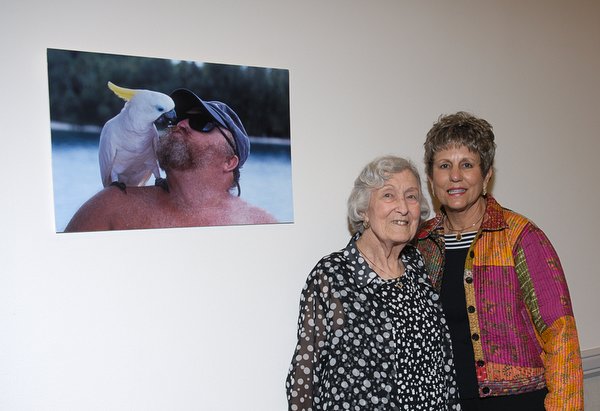 Larry Smith’s mother, Evelyn Smith, and his aunt Betty standing next to Burt Jones’ photography of Larry and a Parrot (Photo: Chip Scarlett) 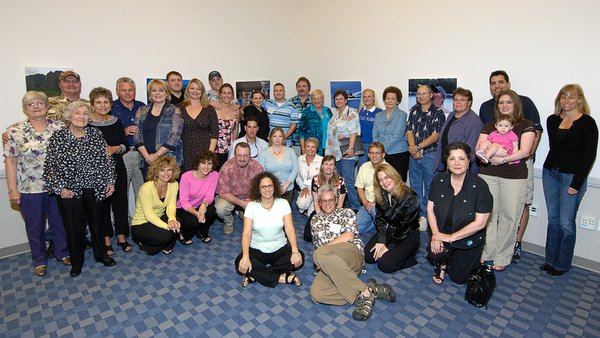 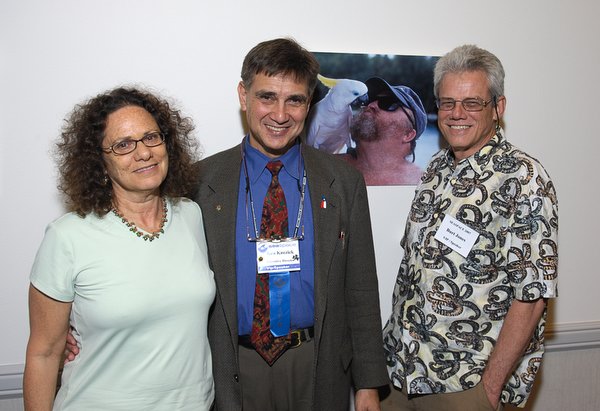