Sony cuts HD camcorder down to size
By Reuters

TOKYO—Electronics giant Sony unveiled on Tuesday a high-definition camcorder that is small and light enough to allow consumers to shoot high-resolution video comfortably with one hand.

Sony hopes the product will help expand the market for high-definition (HD) video cameras, which take sharper pictures than standard camcorders but until now have been mainly used by professionals because of their size and lofty price.

The new camera rests easily in the palm of the hand and weighs 680 grams without battery. It is less than half the size and one-third the weight of a previous model that Sony introduced last year as the world’s first HD video camera for consumer use.

“We wanted to further develop the market for HD camcorders and knew that significantly decreasing the size of the product would be key,” Keikichi Chiba, general manager of Sony’s Personal Video Divsion, told a gathering of reporters.

High definition is a standard for digital video that Sony defines as 1,440 pixels by 1,080 scanning lines of resolution. HD video produces a far more detailed picture by capturing more pixels than standard video.

One way Sony was able to shrink the size and lower the price of the camcorder was by using one complementary metal oxide semiconductor (CMOS) image sensor instead of the system of three charge-coupled devices (CCDs) employed by the HDR-FX1.

Sony, the world’s largest video camera maker, also used a more compact lens and succeeded in cutting the number of circuit boards to two from five and lowering the amount of parts used to 2,000 from 3,000 through better design.

Video cameras are one of the company’s most profitable businesses, in large part because it makes more than 50 percent of its components in-house. Among Sony’s main competitors are Canon and Victor Company of Japan.

The professional version of this camera will be called the HVR-A1U; it includes an XLR audio module, and ... more (?). 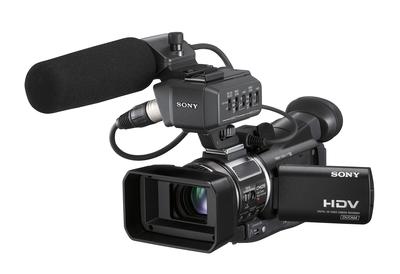