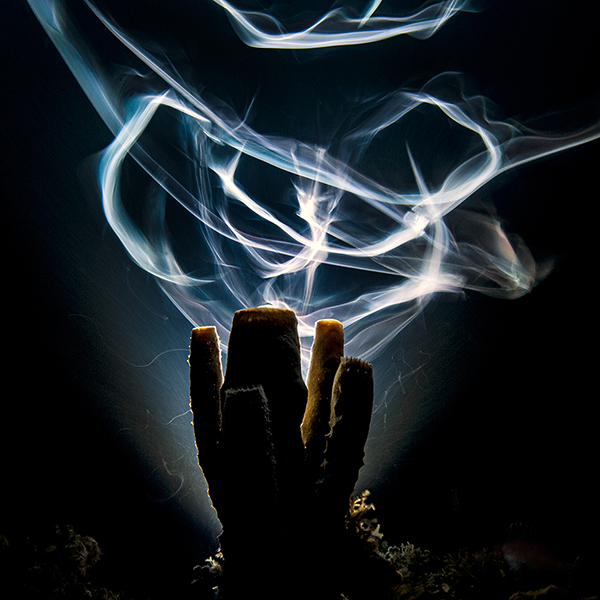 Wetpixel Associate Editor Alex Mustard has been awarded has won the GDT European Wildlife Photographer of the Year 2013 with his stunning image entitled “Night Moves.” He writes exclusively for Wetpixel about the image and the creative process involved in capturing it:

As a photographer you always enter competitions knowing that there is a lot of luck in how the results fall for you. On a different day a jury could easily select entirely different winners.

So I am so pleased that, this time, luck was on my side and that NIGHT MOVES was successful amongst 16,500+ photos and became the first underwater photo to be named overall winner of the European Wildlife Photographer Of The Year. I am particularly happy it was this shot because not only it is visually intriguing, but it is also uses a very novel technique in underwater photography, as it was taken at night, using continuous lighting and a tripod.

It is a long exposure (3 seconds) showing bar jacks (predatory fish) hunting over a coral reef, the long exposure rendering the fish like swirling phantoms against the inky, black sea. On the right you can see the outline of one fish as it stops to feed, its trail showing how it swooped down, across the frame to catch its prey. Around the central reef sponge you can even see the trails of the smaller fish and zooplankton that the jacks were hunting. The longer you look, the more you see.

As I said in my acceptance speech I was inspired to be more daring with my photographic approach after coming to the GDT’s International Nature Photography Festival as a speaker two years ago and took this photo on the very next shoot I did at the East End of Grand Cayman.

Daring to be different is not always an easy route for photographers. Classic wildlife shots tend to get many more “likes” (to use the Facebook vernacular), while more creative shots will divide opinions. Some people will hate this shot, but I also know that many people love it. It is much better to illicit these strong emotions if we want our images to resonate and stop viewers and intrigue them in the natural world.