The Sharks of Protea Banks by Don Silcock 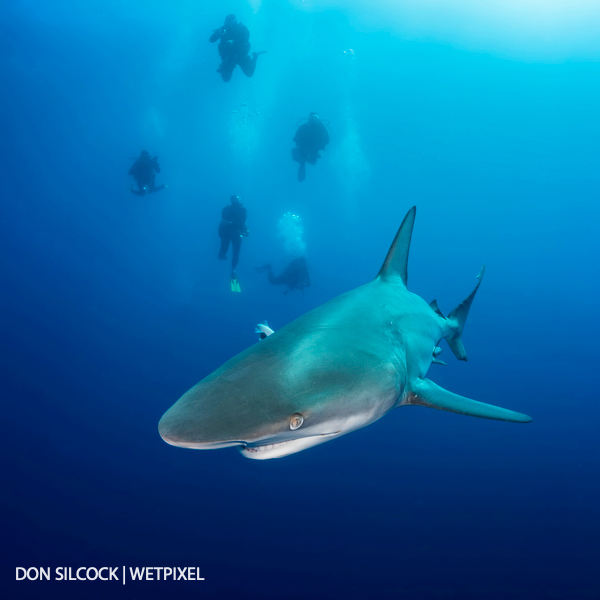 The Agulhas Current is often described as the African equivalent of the Gulf Stream. It runs straight down the 2000km long East coast of South Africa at surface speeds of up 8km an hour, bringing with it warm Indian Ocean water rich with nutrients. 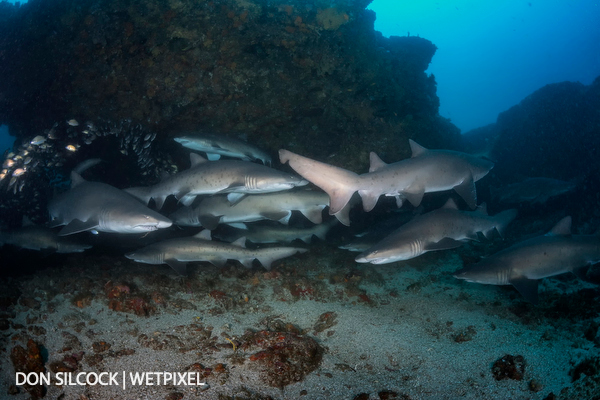 Where those waters touch offshore reef systems along the edge of the narrow continental shelf, they are the catalyst for some incredible ecosystems. And one of the very richest of those systems is the Protea Banks. 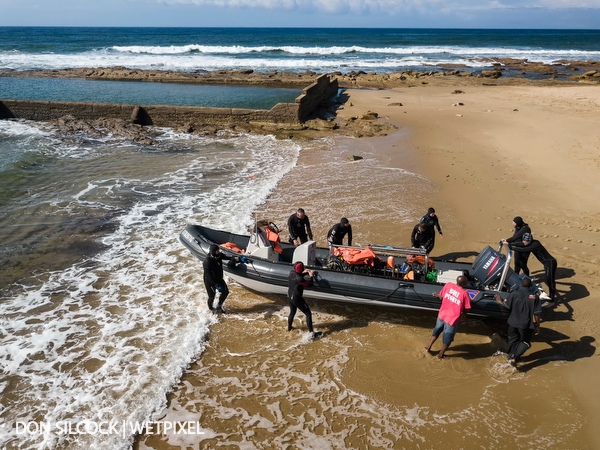 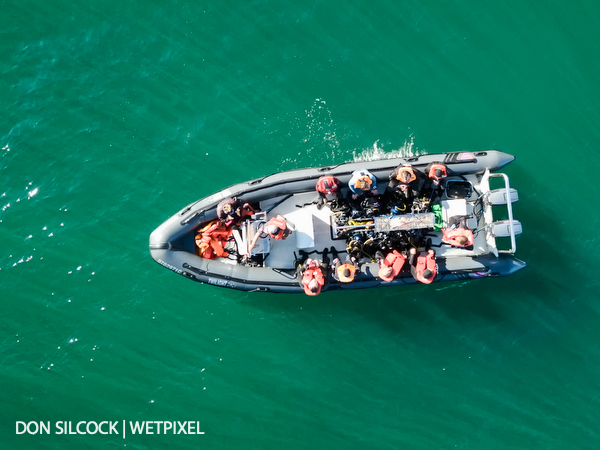 The boat rides can be adventurous

Located 8 km offshore from the town of Margate in KwaZulu-Natal province, the Protea Bank is a large submerged shoal, about 800m wide and 6km long. The average depth is around 30m, so bottom times, air consumption and decompression limits are hardly abstract issues when diving there. 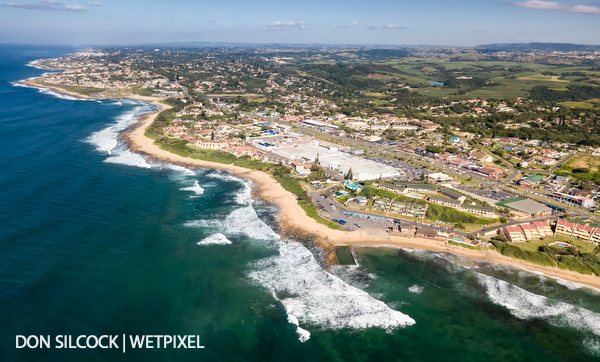 The Protea Banks enjoys a reputation as one of the best places in South Africa to dive with sharks and depending on the time of year you can see up to seven different varieties, including ragged-tooth sharks (Carcharias taurus), “oceanic” blacktips (Carcharhinus limbatus), bull sharks (Carcharhinus leucas), tiger sharks (Galeocerdo cuvier) and two varieties of hammerheads – scalloped (Sphyrna lewini)and great hammerhead (Sphyrna mokarran) sharks.

Often these varieties are in large, if not astonishing numbers – particularly the scalloped hammerheads and the ragged-tooth sharks.

The Sharks of the Protea Banks

Where the vast flow of water that is the Agulhas Current encounters shoals like the Protea Banks and nearby Aliwal, it produces complex eddies and upwellings, rich with nutrients from the deep waters to the East. This adds to the already fertile brew coming down from the North and creating the perfect conditions for fish spawning grounds and nurseries.

Thus, the foundation for the pyramid of marine life is created and towards its apex are the sharks of the Protea Banks. So many of them that virtually every dive is a shark dive, but the encounters vary in nature from random sightings to intense, in your face, interactions on the baited dives.

But all are in open-water — no cages here. 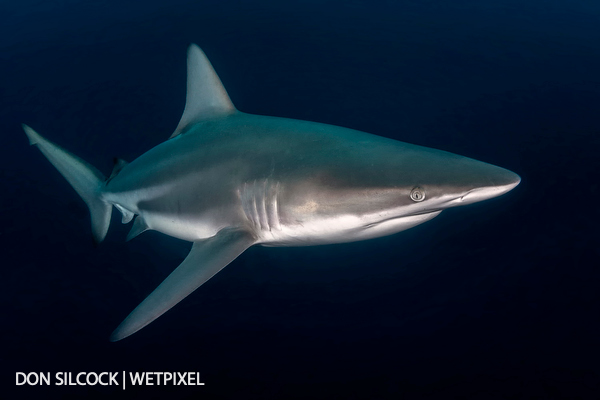 “Oceanic” Blacktips: Carcharhinus limbatus - not to be confused with the smaller blacktip reef variety - are by far the most common sharks of the Protea Banks. 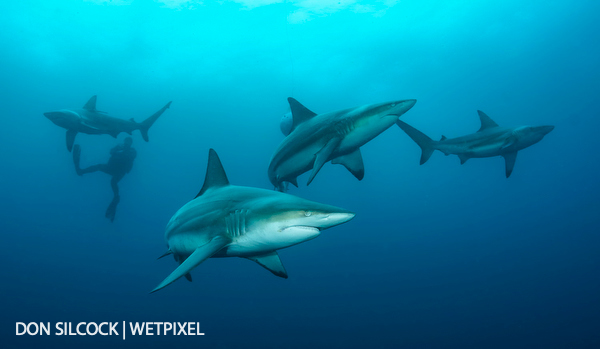 Stout-bodied, medium sized sharks that grow to about 2.5m in length, Oceanic Blacktips have a distinctive light band on their flanks that stands out against their bronze coloration and light underbelly making them easy to identify. 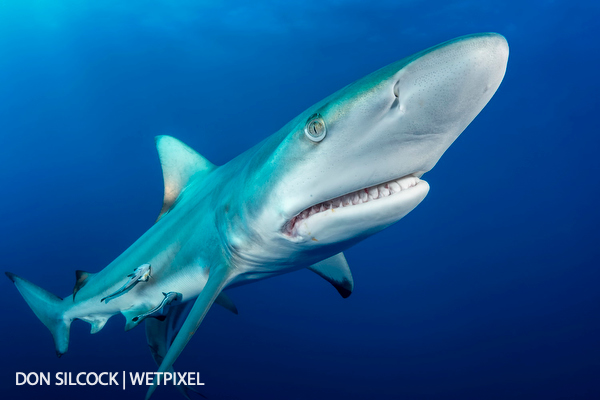 Generally, they show very little aggression and seem wary of divers. But are easily enticed and are the main attraction for the regular baited dives on the Protea Banks. In the presence of food, they are much less cautious and can become quite “sporty” around the bait box. 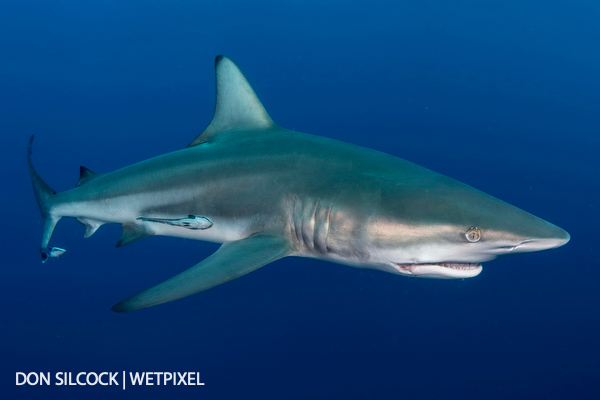 Greater care needs to be taken at such times, but it makes for some great photo-opportunities when they do come in really close! 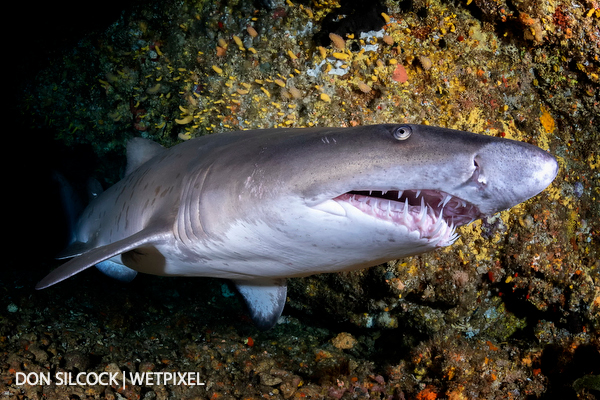 Ragged-Tooth Sharks: Charcharius taurus – known as Grey Nurse sharks in Australia and Sand-Tigers in the USA, “raggies” as they are called locally are also a regular feature of winter months at the Protea Banks. 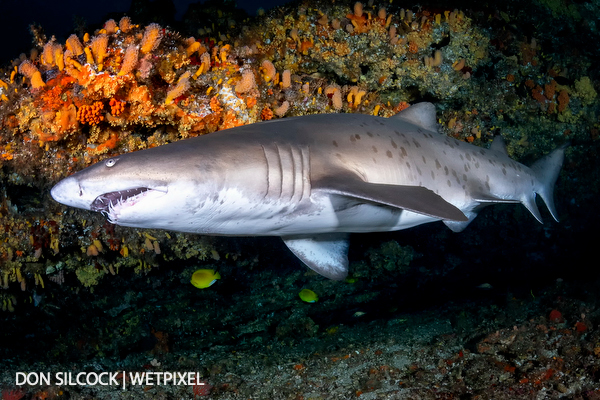 They gather there to mate, with the first males arriving around the end of April. At its peak from mid-June to the end of July, there are hundreds of ragged-tooth sharks patrolling the Protea Banks. 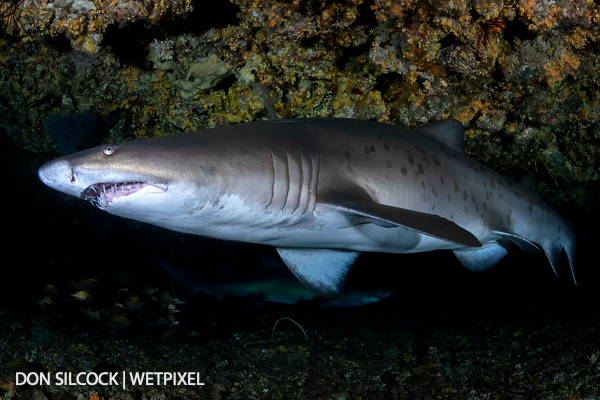 Raggies are quite large sharks that grow to well over 3 m in length and are equipped with an impressive set of teeth which are small(ish), needle-like and evolved to pierce, secure and hold rather than sever. They also have very powerful jaws that allow them to seize and hold on to their catch which is then swallowed whole.

They hunt mainly at night, which means they are at their most active when we have no real way of observing them. Instead, we encounter them during the day when they like to hang out in gutters, caves, and overhangs to shelter from prevailing currents and potential predators. 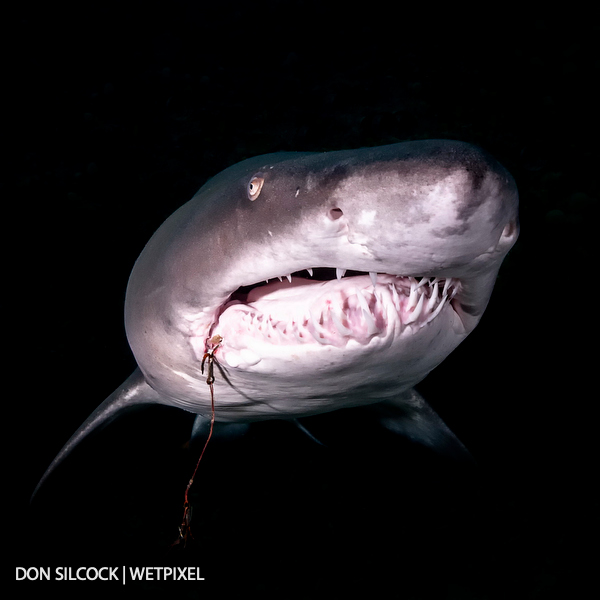 The best place to see the raggies at the Protea Banks are the two caves on the Northern Pinnacle. 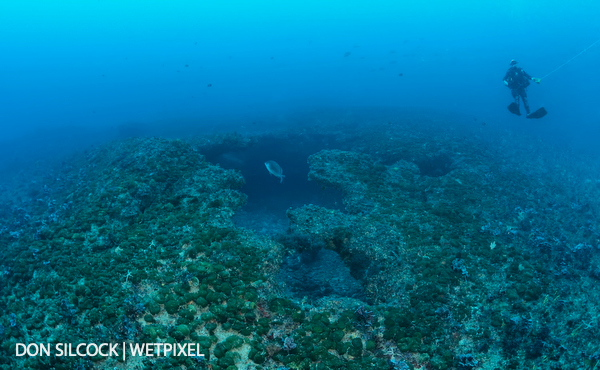 Referred to as the “first or main cave” and the “second cave,” both have large openings which make entry and exit comfortable and safe. But they are deep at around 30 m at the entrance and 35 m in the cave, so bottom times are quite limited.

Spending time in those caves with the raggies is a really intriguing experience as space is somewhat limited and they are after all a quite large animal. But they seem to ignore and avoid you, so the best technique is to try and position yourself in a spot where they will pass by. 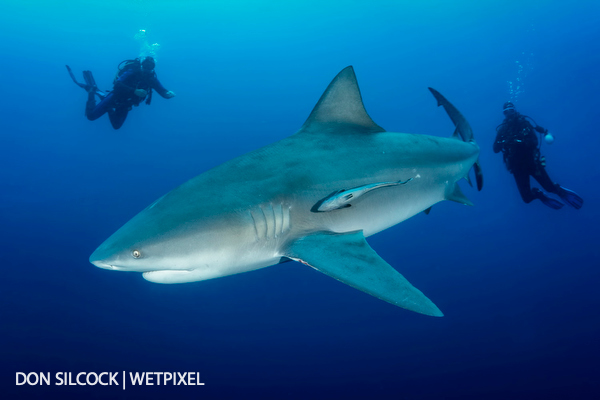 Zambezi (Bull) Sharks: Carcharhinus leucas – “Zambies” as they are known in South Africa are also a regular feature of the Protea Banks and, while they can be seen virtually all-year round, are most common from November through to July. They take their name from Africa’s fourth-largest river, the Zambezi where they have been seen over 1000 miles from the coast. Bull sharks — their name in the rest of the world – are the only species of salt-water shark that can exist for long periods in freshwater. 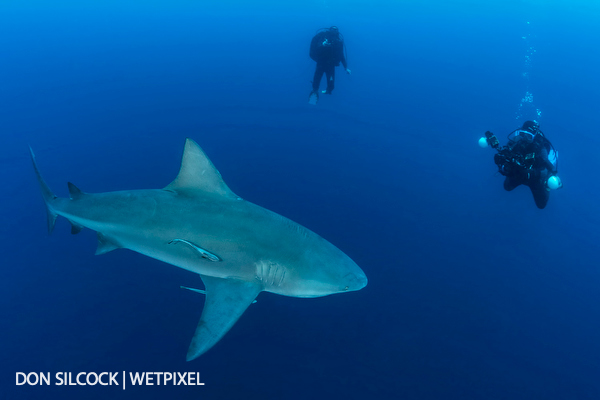 Zambezis are large and robust bodied sharks with distinctive broad, flat snouts and their overall appearance, together with their small eyes and general demeanor is why they are called “bulls” elsewhere! Their average length is around 2.3 m, but larger ones are not uncommon, and the biggest captured was a 4 m long female. 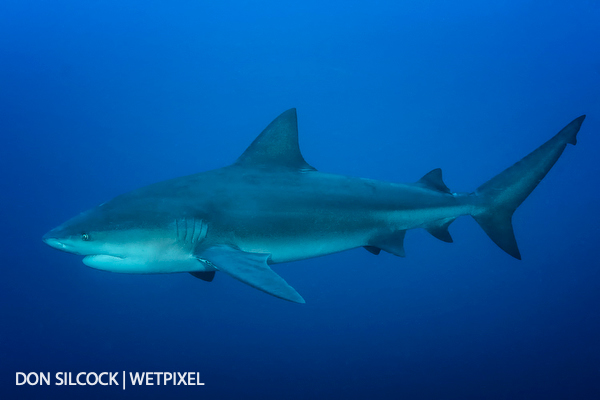 At the Protea Banks encounters with Zambezis come in two flavors… First, there are the random ones, which are quite common but rarely are they close encounters as the area is rich in tuna and the sharks seem well fed. So, they have no reason to come and check you out other than curiosity. Then, on the baited dives it is normal for 5 to 10 Zambies to gather some 15 m below the bait box at a depth of around 25 m. Often they stay there and if you go down to get closer, so do they and before you know it 40 m is approaching!

But occasionally they will come up, at which point the Oceanic Blacktips will quickly fade into the background, and the show belongs to the Zambezis… 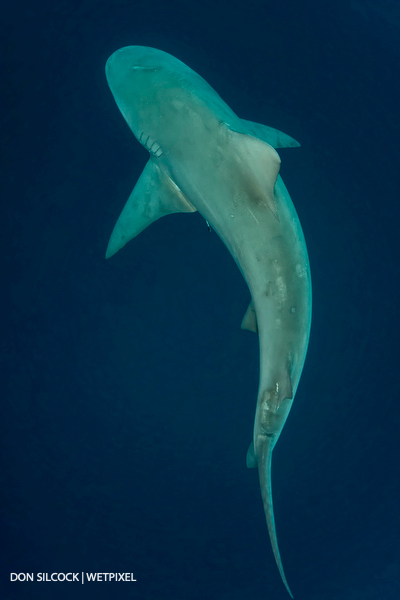 They really are impressive, if somewhat intimidating shark, that shows no fear or hesitation when they do come close, and the encounter is clearly being conducted on their terms! 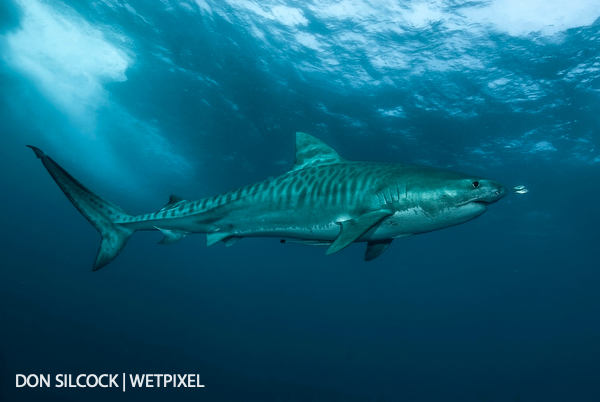 Tiger Sharks: Galeocerdo cuvier — these large and awe-inspiring animals completely dominate the proceedings when they appear.

Their average size is 4 m, but larger ones are quite common, and while that length, combined with their incredible stripes gives them a substantial presence, it is their girth that impresses most. They simply radiate power and strength in a way that only apex predators can. 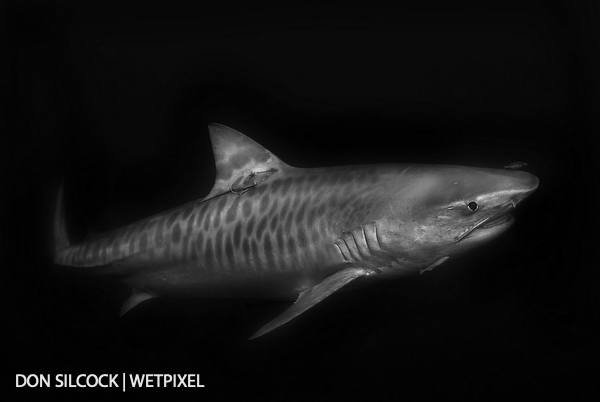 The Protea Banks is thought to be a breeding and birthing area for tigers and the primary season to see them is from late February through to early June, but sightings all-year round are possible.

As with the Zambezi sharks, in-water encounters with Tigers are either random or on the baited dives. 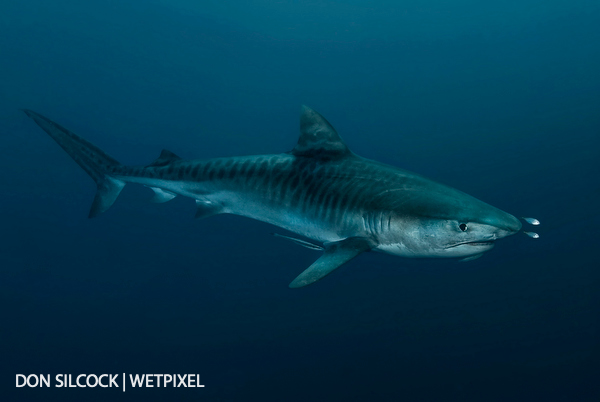 Random encounters are precisely that, and their intensity is entirely at the discretion of the Tiger, and they may come in close and check you out or just ignore you. It’s up to them, but typically they will give you at least a cursory inspection, particularly so on the Northern Pinnacle as that seems to be a favorite spot for them.

On the baited dives they are attracted by the scent of the bait box and patrol around it as if trying to understand the source… They will often wander off and disappear into the blue in one direction and then reappear later from the opposite direction — usually behind you!

They have a formidable presence, exuding total confidence and mastery of their surrounding environment. 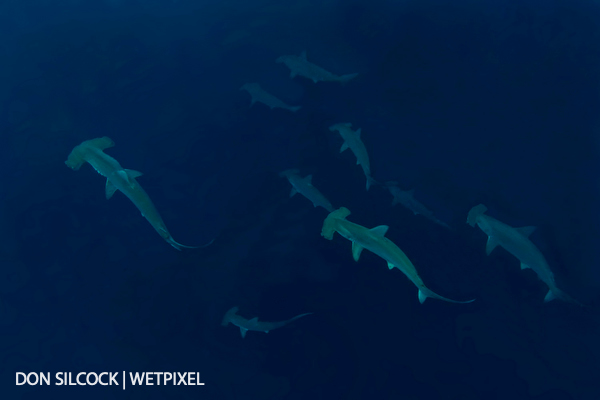 Hammerheads: The Protea Banks also plays host to Scalloped (Sphyrna lewini) and Great Hammerhead (Sphyrna mokarran) sharks at various times of the year, although encounters with them are rarely the close, in your face ones…

The Scalloped Hammerheads gather in huge schools that number in the hundreds, sometimes several hundred, from late October through to early May as part of their annual migration. But as these animals are notoriously shy, it very hard to get close to them.

Instead, you will see them in the distance, where they appear as almost a moving wall of large animals… Other times they will pass below you during ascents to the surface or on the safety stop — but again while tantalizingly close, they are tough to photograph.

Great Hammerheads are also present around the same time but are most common during March and April. Typically, solitary animals that are usually quite shy around divers, they can often be seen cruising along the bottom scanning the reef floor for prey with their unique hammer-shaped heads.

And, if you are lucky, they may be encountered in mid-water during the staged ascents to the surface.

The “Rainbow Nation” of South Africa is an incredibly diverse and interesting country with much to see and do on land. It also offers some tremendous diving that varies from the semi-tropical reefs of Sodwana Bay near the Mozambique border in the north-east to the Great White shark cage diving around Cape Town.

In between those extremes is the rich marine ecosystem of the Protea Banks and its remarkable shark population. However, it must be said that diving the Protea Banks is not for everyone… The conditions can be downright challenging, and you really do need to be a competent diver to make the most of what there is to see there.

But accept those challenges and prepare properly and you will be richly rewarded with some exceptional encounters and truly adventurous diving!

Don is an Australian underwater photographer and photojournalist based from Bali in Indonesia and his website www.indopacificimages.com has extensive location guides, articles, and images on some of the world’s best diving locations and underwater experiences.

If you are interested in learning more about this unique part of South Africa check out Don’s Complete Guide to the Protea Banks. 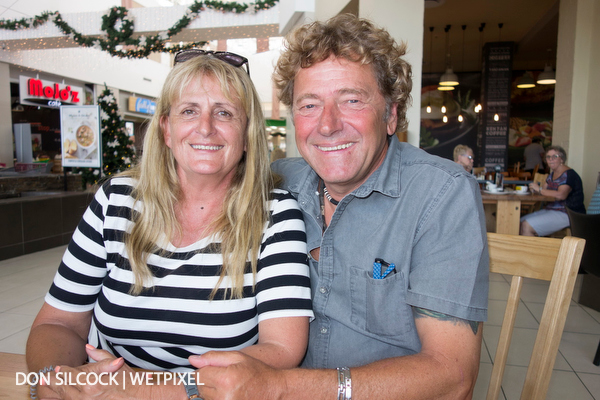 Special Thanks to African Dive Adventures

There is a lot to experience at the Protea Banks and to take it all in I did two trips with a total of four weeks in the water… I enjoyed every single dive and wanted to thank the team at African Dive Adventures run by the exceptional Roland and Beulah Mauz who made it all possible!