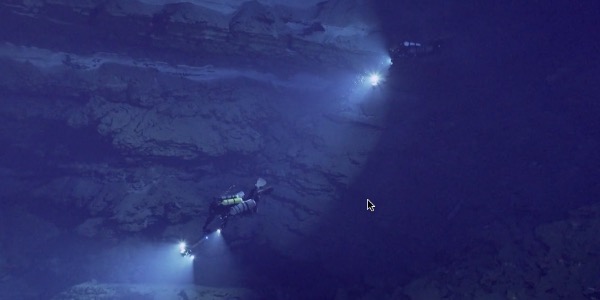 Andy Pitkin and the team from Karst Underwater Research are exploring Florida’s underground aquifers. While carrying out cutting edge exploration dives, the team has been capturing amazing videos of the hauntingly beautiful cave systems.

Andy has been filming with a Sony A7S in a Nauticam housing (NA-A7) with a Nikonos 15mm lens using Nauticam’s adapter plate. He stresses that the films are a team effort, with all the divers cooperating to achieve a satisfying result.

He states that “this combination is key because the low light capability of the A7S and the optical quality of the Nikonos lens are complimentary.

The Sony sensor allows me to use a fixed aperture of f/8 on the lens which produces the amazing depth of field you see on the videos. I use a fixed shutter speed of 1/60 for NTSC and 1/50 for PAL and set the ISO to Auto, which takes care of the exposure. I set the maximum ISO to 25600 to limit the amount of noise in the low light parts of the image.

I use the Cine4 profile with a few adjustments to the gamma for video capture in low light (I have not had as good results with slog2, and the A7S doesn’t have slog3, which may be better). I am waiting for the new A7S III to be announced, which should be this year (I hope). (Editor’s note: It is scheduled for release in 2020.)

The lights are important, but it’s the camera/lens combination that is so crucial. I am amazed so few underwater videographers are using it because tests have shown that the optical resolution of the Nikonos 15mm lens underwater is far higher than even a high-end surface lens behind even a big dome port.”