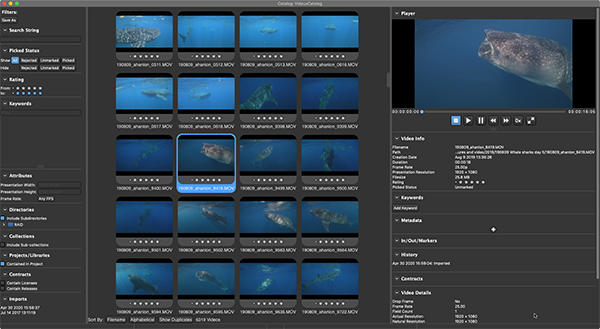 Wetpixel member, Chris Parsons has released version 1.4 of the Videux video organizer, player, and workflow assistant. Designed specifically to keep track of a large number of video files located on numerous volumes, this version adds the ability to import directly from a variety of cameras, date organization and bulk keywording

The 1.4 release of Videux is now available. It has been a long time since our previous release; we’ve had some personal circumstances that greatly impacted our development plans. See the “personal note” below for more information about that. The good news, though, is that we are back in development mode and the 1.4 changes represent all new code. We’re also coding the next release, 1.5, right now. So, expect more features and enhancements in the coming weeks. As always, we welcome your feedback.

The main feature for this release is the ability to import directly from a camera, including cameras like the GoPro and drone cams. In addition, we’ve added an option to organize your videos on import. You can organize by today’s date or by capture date. We’ve tested with several cameras; let us know if you have problems with this feature on a specific camera.

We’ve also added the ability to add multiple keywords at a time, delimited by commas, semi-colon, or tab. And since the Add Keyword field supports copy/paste, you can paste in long strings of multiple keywords. For example, if you paste this string into the Add Keywords field: ” Cheddar; Goat Cheese, Mozzarella”, Videux will add three keywords. Spaces inside of each keyword is preserved, but leading or trailing whitespace is trimmed. So in this example, you’d get three keywords: “Cheddar”, “Goat Cheese” and “Mozzarella”. 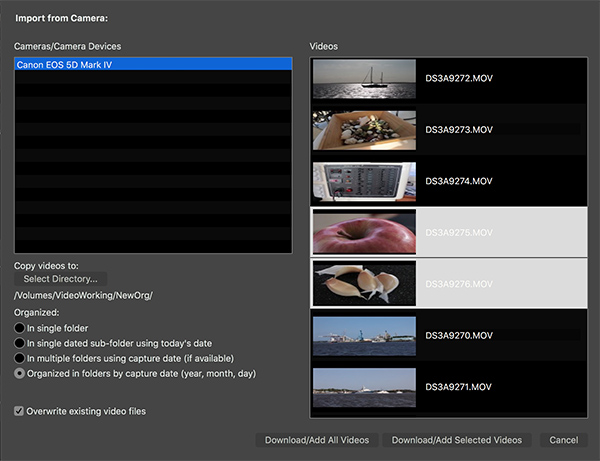 Features added in the v1.4 update:

The 1.4 updates can be accessed as follows:

App Store Versions (Videux Pro AS and Videux Play LT): As with any App Store app, you should get the update automatically if you have App Store set to do that. Otherwise, open the App Store and click on “Updates”.

Videux Pro DL: If you have auto-updates enabled, the updater should find the new version the next time it checks in. If not, click “Videux Pro DL->Check for Updates”.

Plans for next release:

For our next release, we’ll be focusing on adding the organize-by-date capability to the regular file import and to your existing library. This will enable you to quickly organize a rats nest of videos across multiple disk drives. We’re also tidying up the playlist functionality and adding a way to skip ahead to the next video in the playlist (or skip backward). We’re also looking at a couple more options for a proxy generation.

Two years ago, I lost my partner and son, Jared. While I don’t like putting much personal info out on the web, I do want to talk about him for just a moment. Jared was a kind and gentle soul with a brilliant mind. He was painfully shy around people he didn’t know and had a hard time with social interaction, but he was the smartest person I ever met. He was a brilliant programmer and came up with the main UI engine that allows Videux to display huge numbers of videos without bogging down the CPU. It’s hard to express how difficult that problem was and how elegantly he solved it, but I am still impressed when I look at that code. When he died, I wasn’t sure I could keep going with Videux. It was our project and so much of him was in this code. Version 1.3 was entirely his work, and I struggled to get it built and release it. I did, and then I took a break from working on the project. It has been two years now, however, and I had to make a decision whether to continue the project or let it go. I’ve decided to continue and dedicate my work on it to Jared’s memory. So a few months ago I started working hard again on Videux and now have this release ready. At first, I feared that working on it would be too difficult emotionally, but I have found it to be a comforting way to remember Jared. I’m feeling more energized to deliver the vision that we had when we started this project.

Videux ships in three flavors: Videux Pro DL (full version, downloaded from videux.com), Videux Pro AS (full version, Apple App Store), and Videux Play LT (player only version, Apple App Store). Videux Play LT
The Play LT version is different in that it includes primarily only the player portion of Videux, along with the ability to pick/cull, rate and sort video. The player includes the same features as the full versions, with multi-speed and fullscreen playback, and skimming playhead. Videux Play LT can be upgraded with in-app purchases to be equivalent to Videux Pro AS. Available for FREE, Videux Play LT is the easiest to use, most enjoyable video player for the Mac. And in-app purchases mean you can try the basic play and add more functionality as you want it.

Pricing & How to Buy

Videux is ON SALE NOW:

Our team wants your questions and feedback! Videux support community