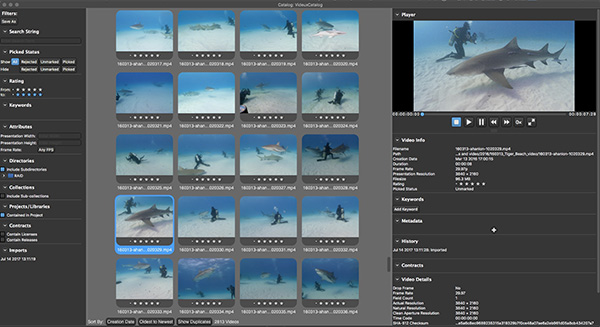 After extensive beta testing, Videux has released their final versions. The app is an “organizer, player, and workflow assistant for video that is highly optimized to get tens of thousands of videos organized and ready for editing.” It is available for Mac via direct download or from the Apple Store as a full or an LT version. It is compatible with most video formats and allows for sorting footage via numerous criteria.

Wetpixel plans to review the app during the upcoming Wetpixel Whale Sharks trip.

Introducing Videux, a powerful organizer, player, and workflow assistant for video that is highly optimized to get tens of thousands of videos organized and ready for editing. Videux is an indispensable tool for stock videographers and people with large video libraries.

With effective organizational features, Videux can handle just about any video collection with ease, tagging them with keywords, ratings, and flags. Videux keeps track of model releases, license agreements, metadata, and much more, making it easy to see at a glance the state of your video library.

A mashup of the word video and d’eux (meaning “of them”), a word borrowed from our love of New Orleans. While it’s perhaps not proper French, we think this portmanteau is à propos.

Easy to use collections make quick work of organizing an edit. Integration with Final Cut Pro X, iMovie, and Premiere Pro makes your workflow faster and easier. A history view shows exactly what has been done with each individual clip.

Optimized specifically for working with video, Videux can deal with very large numbers of video clips. Whether there are 100 or 100,000 clips in your library, Videux can tackle them and make it fast and easy to find just what you’re looking for using the logical, powerful, and intuitive filter-based user interface. A single click duplicate finder means an end to duplicates that waste storage.

Playlists make it easy to string together multiple clips for viewing or presentation. Playlist clips can be dissimilar in any way - mix clips of different resolution, frame rate, containers/codec - and Videux will happily play them in sequence. Clips can be repeated inside a playlist, and with the loop option and fullscreen playback, Videux becomes a standalone video kiosk.

“Videux is a problem solver, born to bridge a gap between capturing footage and delivering it. There is the nature videographer who needs to be able to cull and rate footage and keep track of the licenses for clips sold. There is the one-person documentary filmmaker that needs to be able to find key moments in hours of interview footage and then organize clips before sending to the editor. There is the YouTube channel that wants to keep track of what it has done and what it will do next. We designed Videux for these people.” Chris Parsons - Team Videux

Videux Pro AS and Pro DL versions include all of the following features:

The Play LT version is different in that it includes primarily only the player portion of Videux, along with the ability to pick/cull, rate and sort video. The player includes the same features as the full versions, with multi-speed and fullscreen playback, and skimming playhead. Videux Play LT can be upgraded with in-app purchases to be equivalent to Videux Pro AS. Priced at just $4.99, Videux Play LT is the easiest to use, most enjoyable video player for the Mac.

Pricing & How to Buy

Our team wants your questions and feedback! Videux support community.