The garden of eels by David Doubilet, USA

The colony of garden eels was one of the largest David had ever seen, at least two-thirds the size of a football field, stretching down a steep sandy slope off Dauin, in the Philippines – a cornerstone of the famous Coral Triangle. He rolled off the boat in the shallows and descended along the colony edge, deciding where to set up his kit. He had long awaited this chance, sketching out an ideal portrait of the colony back in his studio and designing an underwater remote system to realize his ambition. It was also a return to a much-loved subject – his first story of very many stories in National Geographic was also on garden eels. These warm-water relatives of conger eels are extremely shy, vanishing into their sandy burrows the moment they sense anything unfamiliar. David placed his camera housing (mounted on a base plate, with a ball head) just within the colony and hid behind the remnants of a shipwreck. From there he could trigger the system remotely via a 12-meter (40-foot) extension cord. It was several hours before the eels dared to rise again to feed on the plankton that drifted by in the current. He gradually perfected the set-up, each time leaving an object where the camera had been so as not to surprise the eels when it reappeared. Several days later – now familiar with the eels’ rhythms and the path of the light – he began to get images he liked. When a small wrasse led a slender cornetfish through the gently swaying forms, he had his shot.

Cruz was on an organized night dive in the LembehStrait off North Sulawesi, Indonesia and, as an eager photographer and speedy swimmer, had been asked to hold back from the main group to allow slower swimmers a chance of photography. This was how he found himself over an unpromising sand flat, in just 3 meters (10 feet) of water. It was here that he encountered the pair of bigfin reef squid. They were engaged in courtship, involving a glowing, fast‑changing communication of lines, spots, and stripes of varying shades and colors. One immediately jetted away, but the other – probably the male-hovered just long enough for Cruz to capture one instant of its glowing underwater show. 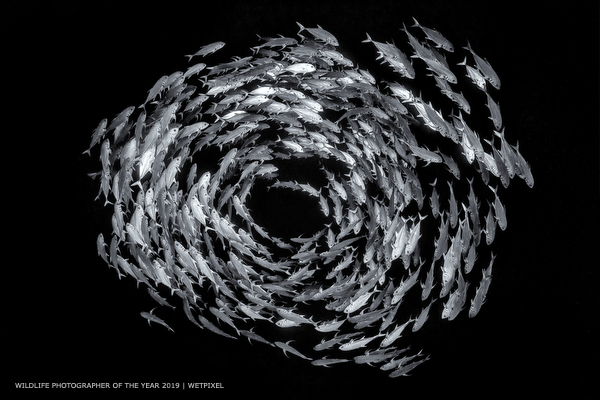 In the clear water of the Red Sea, a shoal of bigeye trevally circle 25 meters (80 feet) down at the edge of the reef. For the past 20 years Alex has travelled here, to Ras Mohammad – a national park at the tip of Egypt’s Sinai Peninsula – to photograph the summer-spawning aggregations of reef fish. ‘The big lure is that I  always see something new,’ he says. This time, it was the high numbers of bigeye trevally. Their circling behavior is a dating exercise prior to pairing up, though it also deters predators. Spawning gatherings like this are easily fished out – but not here, as the national park is a no-fishing marine reserve. Using a lens system with a 130 degree angle of view, Alex captured the shape of the shoal against the deep blue water below, the iridescent angled fish reflecting the light from the sun and his strobes.

A juvenile paper nautilus, its transparent form just a centimeter (a third of an inch) long, rides atop a small jellyfish in Janao Bay near Anilao in the Philippines. As well as benefiting from a free ride and a top position for ambushing planktonic prey, the hitchhiker – a species of pelagic (ocean-living) octopus – is probably gaining some protection from those predators that avoid the jellyfish’s stinging arms (here retracted). It may even be steering the jellyfish. This is a male. A female paper nautilus will grow to be at least 10 times bigger than a male and adopt a different ocean going lifestyle. She secretes a paper-thin egg case – shaped a bit like the shell of an actual nautilus (a marine mollusc) – which doubles as a floating home as well as a brood chamber. A male, when mature, has a special long arm containing sperm, held in a sac under his huge eye. When he mates, the arm breaks off and enters the female to fertilize her eggs. Wayne encountered this male and his transport on a challenging night-time blackwater dive. This involved attracting plankton from the depths to a lighting rig – a 30-meter (100-foot) rope attached to a buoy, with lights set at intervals – and then photographing the larger creatures that arrive to feed on the plankton. Using searchlights, he observed a handful of small jellyfish being ridden by juvenile paper nautiluses, but it was the electric green of this one’s tentacles that grabbed his attention. Wayne spent no more than five minutes photographing ‘the magical pair’ before leaving them to disappear into the inky blackness. 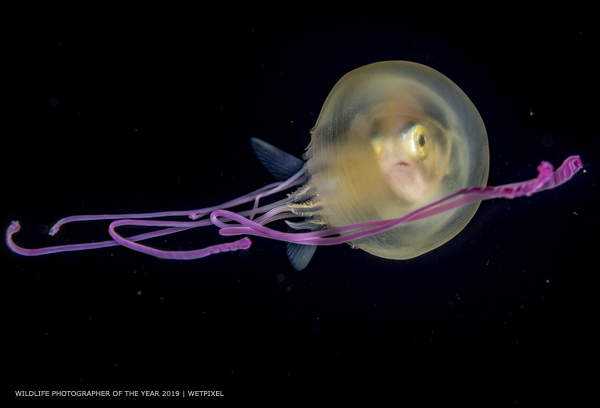 A juvenile jackfish peers out from inside a small jellyfish off Tahiti in French Polynesia. With nowhere to hide in the open ocean, it has adopted the jelly as an overnight traveling shelter, slipping under the umbrella and possibly immune to the stinging tentacles, which deter potential predators. In hundreds of night dives, says Fabien, ‘I’ve never seen one without the other.’ It is not clear if a jelly derives any benefit or why the relationship breaks down when water acidifies. Diving in deep open water in darkness – here at 20 metres (65 feet) down – is Fabien’s speciality. Zooplankton migrate up from the deep under cover of darkness to feed on surface-dwelling phytoplankton (which need sunlight), and other predators stream after them. Drifting with the jelly and its rider, Fabien combined all the elements of his composition at exactly the right moment.

A delicate, transparent comb jelly stretches out its vitreous sails as it rides the Mediterranean currents trawling for food. The species is commonly seen off the Spanish coast, but mostly with its ‘sails’ folded up or damaged by the action of waves, sediments or predatory fish. Angel came across this pristine individual on a dive 11 kilometers (7 miles) off the coast of Alicante, looking to see what had been swept in by an unusually large influx of surface water from the Atlantic. The prize was this transparent individual about 25 centimeters (10 inches) lobe to lobe – relatively large compared to the other 100–150 known comb jelly species. Its apparent blue color is a product of the reflection of light from above, and the iridescent combs along its cylindrical body are rows of fused cilia (two out of its eight being visible) that beat in synchrony, like tiny oars, scattering light as they rotate or steer the comb jelly. It catches tiny prey animals with its sails and also on its thread-like tentacles – one pair just visible at the bottom – using cells (colloblasts) that spurt out glue when touched. But it is also very sensitive to movement. ‘At the slightest vibration, it folded away its fragile sails,’ says Angel, who had to approach slowly and stealthily, finally succeeding in capturing the jelly’s exquisite form from above.

A swirl of rays by Duncan Murrell, UK

A front-row seat for the courtship chase of spinetail devil rays was a rare treat. In more than a decade photographing in Honda Bay in the Philippine island province of Palawan, Duncan had occasionally seen these huge fish – up to 3.1 meters (10 feet) wide – but only once close up, when they were feeding on a krill swarm. But now, with only one thing on their minds, they swirled below as he snorkeled at the surface. One (left) – identified as a female by bite marks under her fins – was being pursued by the other two in a fast, swirling chase. Just for a second, the three converged in front of him, the soft, natural light lending a painterly quality that matched their grace. Once mated, the female would give birth to just one pup. Such a low birth rate, together with their late maturity and schooling behavior, makes rays particularly vulnerable to overfishing, and a recent surge in demand for their use in traditional Chinese medicine is causing concerning population declines.

On a night dive over deep water, off the coast of the Philippine island of Luzon, Songda’s lamp caught the glint of a juvenile African pompano. When fully grown, at up to 1.5 meters (nearly 5 feet), African pompano hunt in warm coastal water, but when they are juveniles, they are open water drifters. At this small stage, its dorsal and anal fins sport long, trailing filaments that, as the fish moves with the currents, appear to imitate the stinging tentacles of jellyfish – a possible deterrent for at least some predators. Songda was fascinated by the fin rays and for a few minutes managed to glide alongside the 20-centimeter (8-inch) fish. Using a slow shutter speed and burst of strobe light, he caught the blue-glinting motion-trails of a third of its extravagant rays before the pompano disappeared with a flick of its tail.