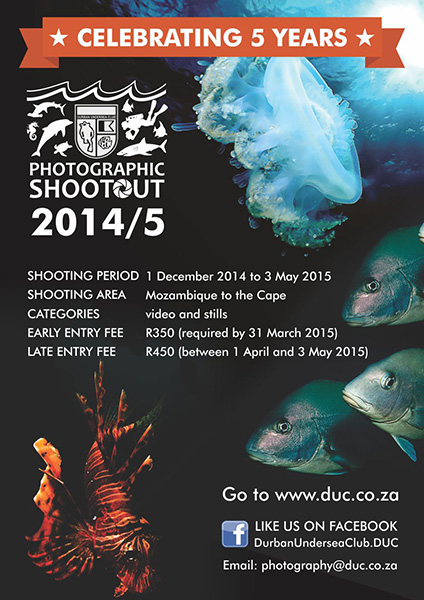 The Durban Undersea Club is soliciting still and video entries for its annual shootout. All submissions must have been captured between 1 December 2014 and 15 May 2015 within the geographical boundaries of the Cape to the South and the Mozambique border to the North.

The Durban Undersea Club (DUC) Shootout aims to create a forum where underwater video and still photographers can compete against one another, and at the same time, expose their favorite dive sites in Southern Africa!

The DUC Shootout is open to all marine photographic or video enthusiasts at all levels -from the novice with the simplest camera and housing, to the dedicated photographer or videographer. As long as the image/video was captured during the set-out shooting period (1 December 2014 to the 3 May 2015) and taken in the ocean from Mozambique to the Cape, it will be eligible for judging on 16 and 17 May 2015.

To find out more about the competition and view last year’s winning stills and video submissions, please visit the DUC’s website.