The 2015 series of Wetpixel Whale sharks trips are starting tomorrow, with folks gathering from around the world to snorkel with and film or photograph the large numbers of whale sharks (Rhincodon typus) that gather off Isla Mujeres, Mexico. Most of the participants for the first trip have gathered at Hotel Playa la Media Luna ready for an early start tomorrow. Reports are that there is whale shark and manta ray (Manta birostris) action going on so we look forward to an exciting and productive day! 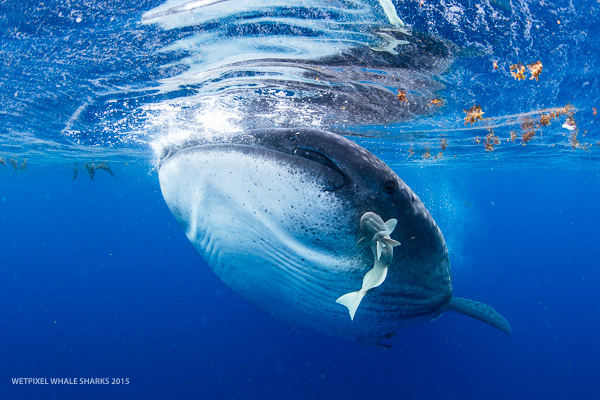 We will be reporting “live” from Isla Mujeres over the next three weeks, hopefully bringing a flavor of this amazing trip to those of you that can’t be here. Please keep checking back for updates each day. 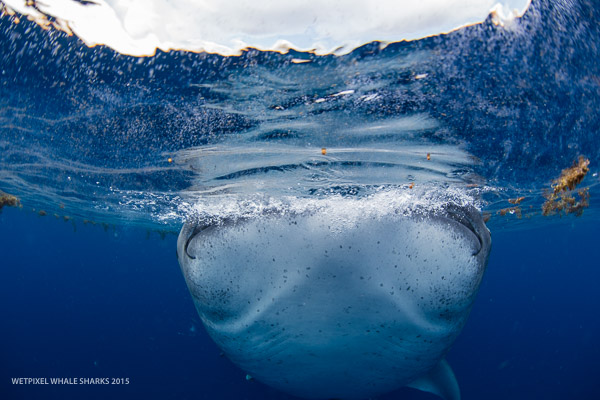 Day 1 dawned bright and early, with a 7.15 briefing in the hotel’s breakfast room. After some guidelines and rules on how to interact with the sharks, golf cart keys were distributed and we set off for the jetty. As is traditional, golf cart races were the order of the day, although I had a succinct advantage in that I knew where I was going!

We set off on two boats, the Andrea M and the Sea Chuachua (c-wa-wa). After an hour of steaming North, our skippers came off the throttles, and found us some whale sharks! Initially, we had maybe 10 sharks, fairly closely packed, but they got spread out as other boats started to arrive.

We spent the rest of the day searching (and finding) whale sharks. In amongst this, we also briefly found manta rays and we were fortunate to have a great interaction with a pod of dolphins which circled round several times and obviously found these floundering, lumbering snorkelling animals worthy of further attention! I should add that I was the the lumbering one, everyone else looked like porpoises in the water!

There were less sharks around than there have been at times over the past few years, perhaps explained by the relative lack of eggs in the water. Of course, the bonito can spawn at any time, which will perhaps increase the shark numbers. It is also perhaps germane at this point to note that we still saw over 30 individual sharks, which is probably more than most people see in a lifetime!

In the evening, we went for the traditional group meal at Mininos, down on the beach. Tales from the day were exchanged, and images shared. We are all excited to see what tomorrow will bring!

Team Wetpixel was up early and we set off from the jetty at 7am sharp! I was with Harry, Aki, Paul, Steve and Javier on the Sea Huahua, and Cristian Dimitrius was with Alison, Mike, Karen and David on the Andrea M. The Sea Huahua is very quick so we beat the Andrea M quite comprehensively in the “race to the sharks!”

I remember my first experience of witnessing the amazing spectacle of lots of sharks in a very small area. The first thing I saw was a load of refections on the surface of the water and I remember asking Eric (Cheng) what this was. He pointed out that it was from wet dorsal fins of the sharks catching the light as they turn during their feeding. Well, this morning we had this again. There was a very large number of sharks feeding actively on the much greater numbers of fish eggs in the water.

The water was bubbling with whale sharks….

We got in the thick of the action and were surrounded by multiple whale sharks for over three hours. Literally, every way we turned was full of sharks! It was amazingly productive photographically, which the group were able to exploit to the full.

Steve Holtegaard getting in among the action.
Javier Mendoza catching the moment!

Uniquely for today, Javier actually got an image of a sailfish (he was the only one to see it) and some mantas.

There was so much action going on, that we needed a surface controller to direct us!

Our early start was proven to be the right decision as by around 11, there were lots of boats, cutting off the sharks feeding patterns and hence making them want to dive deeper. There were still quite a few sharks in the water, but they were not as concentrated as earlier. In addition, they often had large numbers of “snorkeler” pilot fishes in bright orange life jackets following them, which presented a creative challenge!

So we messed around in the water!

The action today was magnificent, with large numbers of sharks packed into a small area for the first couple of hours. We were one of very few boats when we got there and this made for great opportunities. Wetpixel has always run their trips this way, and this means that they are far more photographically productive than almost every other operator here. Certainly, the “standard” day trip boats offering snorkel excursions simply do not cater to the needs of image makers and would be very frustrating.

So we plan and even earlier start tomorrow, and hope that the number of sharks exceeds even today’s amazing experience.