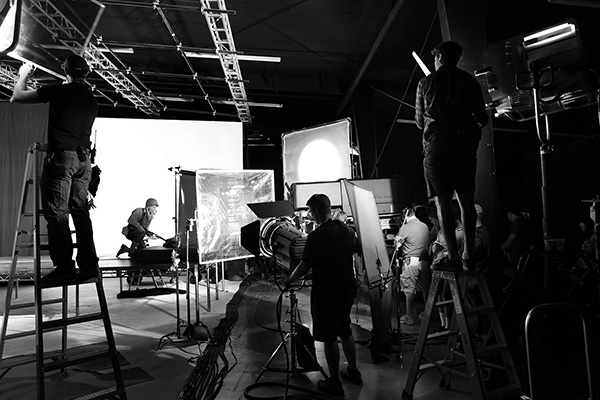 Light Field camera company Lytro has announced its Cinema camera. Designed for film and TV crews, the new camera makes it easier to blend live footage and computer-generated effects and allows directors to make changes to their footage in post-production that could previously only be made by reshooting the scene.

The Lytro Cinema is capable of capturing 755 RAW megapixels at up to 300 frames-per-second, as well as offering 16 stops of dynamic range. It’s sensor is a foot and a half wide. It will allow filmmakers to refocus an change the depth of field in post. In addition, jus about everything can be edited including, frame rates and shutter speeds.

The camera will not be available to purchase, but it will be possible to hire the new camera system from late 2016, with rates starting at $125,000.

Lytro unlocks a new level of creative freedom and flexibility for filmmakers with the introduction of Lytro Cinema, the world’s first Light Field solution for film and television. The breakthrough capture system enables the complete virtualization of the live action camera – transforming creative camera controls from fixed on set decisions to computational post-production processes – and allows for historically impossible shots.

“We are in the early innings of a generational shift from a legacy 2D video world to a 3D volumetric Light Field world,” said Jason Rosenthal, CEO of Lytro. “Lytro Cinema represents an important step in that evolution. We are excited to help usher in a new era of cinema technology that allows for a broader creative palette than has ever existed before.”

Designed for cutting edge visual effects (VFX), Lytro Cinema represents a complete paradigm shift in the integration of live action footage and computer generated (CG) visual effects. The rich dataset captured by the system produces a Light Field master that can be rendered in any format in post-production and enables a whole range of creative possibilities that have never before existed.

“Lytro Cinema defies traditional physics of on-set capture allowing filmmakers to capture shots that have been impossible up until now,” said Jon Karafin, Head of Light Field Video at Lytro. “Because of the rich data set and depth information, we’re able to virtualize creative camera controls, meaning that decisions that have traditionally been made on set, like focus position and depth of field, can now be made computationally. We’re on the cutting edge of what’s possible in film production.”

With Lytro Cinema, every frame of a live action scene becomes a 3D model: every pixel has color and directional and depth properties bringing the control and creative flexibility of computer generated VFX to real world capture. The system opens up new creative avenues for the integration of live action footage and visual effects with capabilities like Light Field Camera Tracking and Lytro Depth Screen – the ability to accurately key green screens for every object and space in the scene without the need for a green screen.

“Lytro has always been a company thinking about what the future of imaging will be,” said Ted Schilowitz, Futurist at FOX Studios. “There are a lot of companies that have been applying new technologies and finding better ways to create cinematic content, and they are all looking for better ways and better tools to achieve live action highly immersive content. Lytro is focusing on getting a much bigger, better and more sophisticated cinematography-level dataset that can then flow through the VFX pipeline and modernize that world.”

By capturing the entire high resolution Light Field, Lytro Cinema is the first system able to produce a Light Field Master. The richest dataset in the history of the medium, the Light Field Master enables creators to render content in multiple formats – including IMAX®, RealD® and traditional cinema and broadcast at variable frame rates and shutter angles.

Lytro Cinema comprises a camera, server array for storage and processing, which can also be done in the cloud, and software to edit Light Field data. The entire system integrates into existing production and post-production workflows, working in tandem with popular industry standard tools. Watch a video about Lytro Cinema:

Lytro Cinema from Lytro on Vimeo.

“Life” the first short produced with Lytro Cinema in association with The Virtual Reality Company (VRC) will premiere at the National Association of Broadcasters (NAB) conference on Tuesday, April 19 at 4 p.m. PT at the Las Vegas Convention Center in Room S222. “Life” was directed by Academy Award winner Robert Stromberg, Chief Creative Officer at VRC and shot by David Stump, Chief Imaging Scientist at VRC.

Learn more about Lytro Cinema activities during the 2016 NAB Show and get a behind-the-scenes look on the set of “Life”.

Lytro Cinema will be available for production in Q3 2016 to exclusive partners on a subscription basis. For more information visit Lytro Cinema.